An Unexpected Friendship: Nessie and Mylie 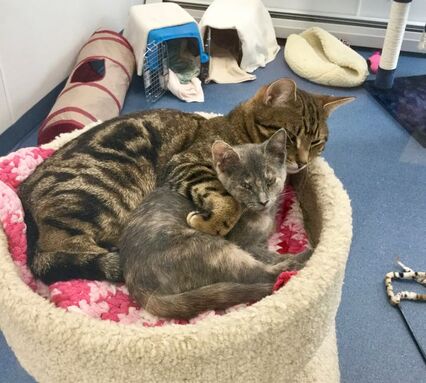 ​Nessie was 10 weeks old when we received a call from a woman in a trailer park that there was a kitten hanging around.  She could not keep it and asked if we would take it.  We agreed.  On Feb. 28, Nessie arrived into our care.
​
Mylie is a two year old mackerel tabby....very friendly, sweet, and gorgeous.  His owner could no longer keep him due to personal issues and we agreed to take him on Feb. 24.
​
​
As we always do, after they were checked and tended to at the vet, we brought them both to the Shelter and put them in isolation for the typical five to seven days.  Nessie was on the top of a three level condo.   Mylie had the middle and bottom.  Both of them were extremely lonely...crying, restless.  So...of course...we began to let them out together.  Nessie was so excited she could hardly contain herself.  She was all over Mylie...snuggling, rubbing up against him, wanting to play.  He obliged in a very patient way, although at times he needed to go up on  a shelf to get a break.  At this point, they were together only under supervision.  But when their seven days were up, and they came out “onto the floor”, we decided to put them together in one of our colony rooms.  It was a beautiful thing to see how their friendship just got closer and closer.  They played together, they groomed each other, they slept together, often spooning, Mylie having his arm tucked tightly around Nessie, protecting her.  And so...we decided that they needed to be adopted together.  We had many requests to adopt either Mylie or to adopt Nessie, but we stuck to our decision.  And in almost no time, the perfect home came along and they were adopted out together.   The adopter could not be happier.  She had come in for only one cat...but when she saw them together and spent time with them in their room...she fell in love...with both of them.  Nessie and Uncle Mylie are now in the absolutely best forever home anyone could imagine. 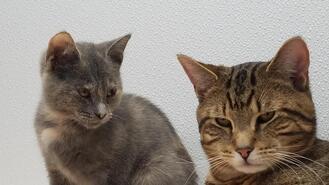