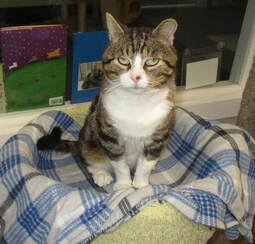 Miller Update - February 2021
​
You may remember Miller, who was featured in the January newsletter.  He was found several months ago by the side of the road, without much strength left in him.  He had buckshot all through his body, he was anemic, he had an infected foot, probably from a buckshot lodged there.  And his upper canines and an incisor were broken off, revealing pulp and nerve.
​
He is now in tip top shape...blood work totally normal, his teeth and gums in fine shape due to dental surgery, the buckshot is working its way out of his body….and his foot is now healed.  He is so ready for his new forever home, probably where his human will be home most of the day with him and can dote on him as the only furry companion.  A wonderful good Samaritan is sponsoring Miller’s care until he is adopted. 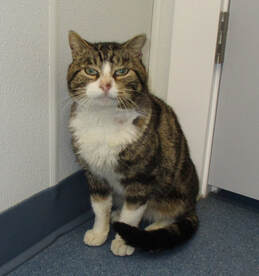 These are, indeed, startling times.  Martin Luther King, Jr. once said “the arc of the moral universe is long, but it bends towards justice”.  With all humility, I would like to enlarge that by saying the arc of the moral universe also bends toward kindness, toward compassion.  We see it all the time, even in very troubled times, in people reaching out to help fellow humans in need, we see it in selfless acts to bring care and softness to fellow humans.  We see it in the courage of the many working for the rights of others less fortunate.  And we see it in the acts of humans giving and acting with love and care for animals in trouble, to bring back some of those animals from the brink so that they can find homes that will cherish them and let them reach the fullness of life that they deserve.

And so, with all this in mind, I would like to tell you about Miller.
He is a beautiful mackerel tabby with a white chest, probably about two years old.
His story epitomizes the best in human nature.  A resident of Cabot was driving along Rt. 15 and noticed a cat by the side of the road, a cat definitely in trouble, thin, battered, not at all in good shape.  She took him to Western Avenue Vet Clinic, and surrendered him to Kingdom Animal Shelter, and included a generous donation for his care.  The staff at WA named him Miller.  Miller was thoroughly checked out.  He had 15 buckshot throughout his body.  One was near his spine.  One was right next to his arm bone.  His blood work showed that he was anemic.  He had an infection in his foot.  And both upper canines were broken off at the gums, exposing the pulp, an injury that hints at being hit in the face.  Miller is now at the Shelter, having received two rounds of antibiotics, for his infected foot and for his inflamed gums.  He is on a med supplement for his anemia.  He has an appointment at Ryegate Small Animal Hospital to determine the next best steps for dental work.  Once his issues are tended to properly and well, he will be ready for his forever home.   With all that he has been through, he remains a loving, affectionate, engaging feline fella, the recipient of the human kindness and compassion that has surpassed and freed him from his previous, ill-treated life.
We are so glad to have Miller in our care.