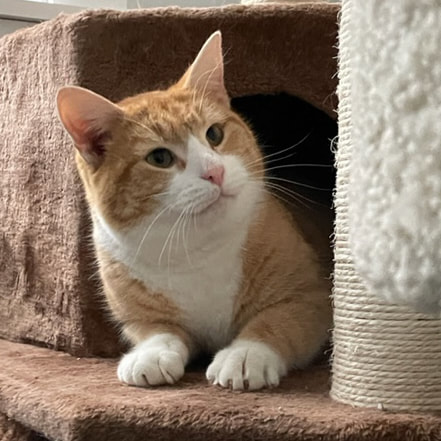 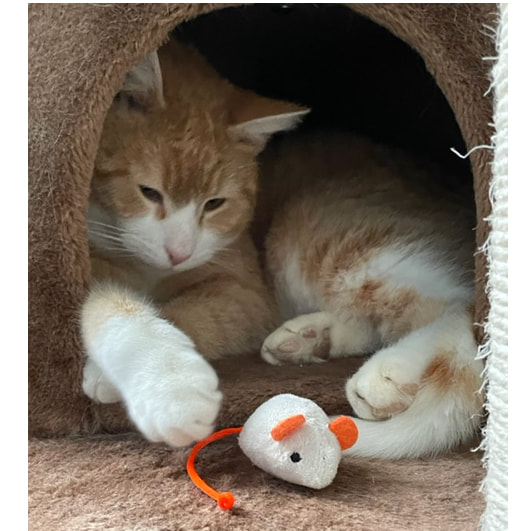 There is nothing more warming to the soul than having one of our kitties evolve from being very very shy and scared, to rolling around, purring, asking for pets, and giving a little hand lick in thanks.
​
Caleb came to KAS on Dec. 4, 2021.  He had been a stray in Thetford, VT.  A resident noticed him hanging out at a nearby bird feeder, actually eating bread that had been dropped on the ground.  She trapped him and put him in her guest room.  He was wild with fright, crawling the wall, desperately trying to get out the window.  We brought him back to the Shelter and put him in his own, nicely apportioned room.  He hid totally from view.  A few days later a volunteer called and said they could not find him…anywhere in the room.  And everyone was sure he hadn’t gone out the door.  So…where in the world was Caleb?  It turned out he had gotten up through the ceiling tiles  (we have no idea how!!) and was hanging out in the “attic” of the Shelter.  With patient skill, our advising vet, Dr. Sally, and our trapper, Nancy P, were able to get him down…and the tiles were then secured.  Over the past month, the change in Caleb has been absolutely remarkable.  Volunteers have sat with him, talked with him, reached out to him, presented toys to him, until he began to roll over for belly rubs…and purr…and even come out, asking for more attention.  Caleb is one very precious boy.  He is about two years old.  He would need a quiet home, no other pets at this point, and someone gentle and patient, who could be home a lot and work with him to bring him out in his new home.  He would be shy at first…but with gentle, encouraging time spent, he would secure a place in your heart forever