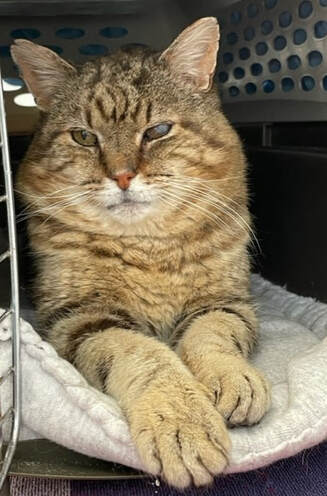 Tyler is a gorgeous caramel tabby, probably about 4 years old.  He was being fed by a good Samaritan near abandoned buildings down around Bay St. in St. Johnsbury.  We received word that some of the buildings he was living in were slated to be torn down.  And so, the same caretaker trapped him and brought him to the Shelter.  Dr. Sally and vet tech Andrea went into action to assess and treat this new, shy boy.  It turns out he has lots of challenges.  He has an old injury to his left eye and probably can’t see out of it.  It was a bit inflamed, but is quieting down.  His gums and teeth were in rough shape, needing some extractions and medical care.  Dr. Connie Riggs and Deb Glottman of the Mitzvah Fund in Montpelier accepted him for dental surgery.  Teeth were removed, abscesses that had moved up into the bone were cleaned and treated.
Tyler had giardia…but also a rather odd tapeworm, that is found only in frogs and fish.  He must have been down by the Passumpsic River, hunting his own food.  He is on meds to take care of the giardia and tapeworm.  And he has tested positive for FIV.
But we are tending diligently and lovingly to Tyler to get him feeling much better and ready for being accepted into a loving and understanding home.  He is a bit shy….but so very responsive to pets and scritches.  He is slowly remembering that humans can be his friend.