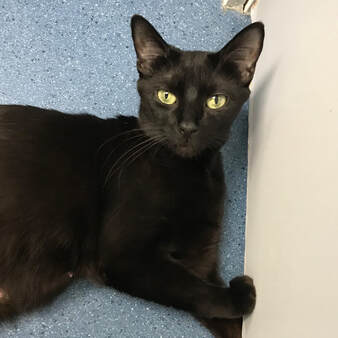 ​A Cascade of Beauteous Black: It’s a Family Affair
​
-Helen Morrison, Board President

Once upon a recent time, in a land not so far away, there lived a beautiful, sleek, black Mama Cat.  Mama Cat’s true name was Katarina…because she was the Queen.  Katarina had a very special trait.  Katarina had no tail.  Katarina had a litter of black kittens.  Some had tails, some did not.  Having no tail is a very strong trait.  Most of these found homes.  But a few of them did not find homes.  And some of those kittens became the father of a new litter of kittens.  Two of them had bobtails (Licorice and Ebony) and one had almost no tail (Anise).  All were black.
Everyone was living pretty happily together except it was getting a little crowded.  Ebony got pregnant…and on St. Patrick’s Day, 2022, gave birth to five black kittens….Clover (bobtail), Fiona (no tail), Aidyn (no tail), Guinness (bobtail), and Liam (tail).  Do you need a family tree yet???
​
​​
Though the home in which this beautiful family lived loved these beauteous black kitties very much, they were having trouble keeping track and having enough food for them.  And so….Kingdom Animal Shelter opened its Castle Gates and welcomed this Royal family in.
And they are all an utter joy.  They are friendly, sleek and shiny, very very dark with even darker stripes…and they purr if you so much as look at them.
This very precious and unique family is the best of the best….sweet and beautiful.  They would be a joyous gift to a number of very lucky homes.  After all, everyone knows that Black Cats bring Good Luck!  If you have a wonderful Black cat in your life, we would love to hear its story.
Katarina's Kittens