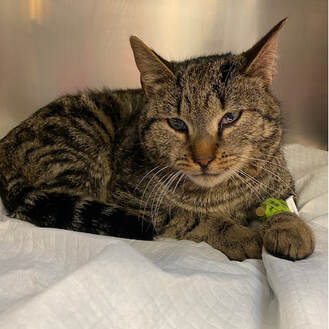 ​Amahl Gets a New Start

On March 29 we received a call from a Cabot resident about a cat that appeared to have been hit by a car and was found lying in a snowbank by the road.  This kitty, a beautiful young tabby boy, was brought to Western Ave Veterinary Clinic and taken in by Kingdom Animal Shelter.
It appeared that he had suffered trauma to the head and was somewhat slow and dull in his mentation.  He stayed at the clinic for about a week, needing IV fluids, and syringe feeding.  There was a good deal of concern about his chance for survival.  But thanks to the good care at Western Avenue,  he rallied and began eating on his own and using the litter box.  We named him Amahl.  His story was posted on Facebook by his rescuers.  So many generous and caring people sent their well wishes, their prayers, and even their financial support of his care.  We are so grateful for these good-hearted souls.
​
Amahl is now at the Shelter….and is quite shy and afraid.  He is extremely gentle and enjoys some petting.  We have a number of volunteers who will spend time with him, quietly, slowly gaining his trust, so that ultimately he will be ready to find his forever home.  This will take patience and time...but so many worthwhile things do take time and patience.  And this beautiful boy is so very worth it.
​
Read the updates on Amahl here