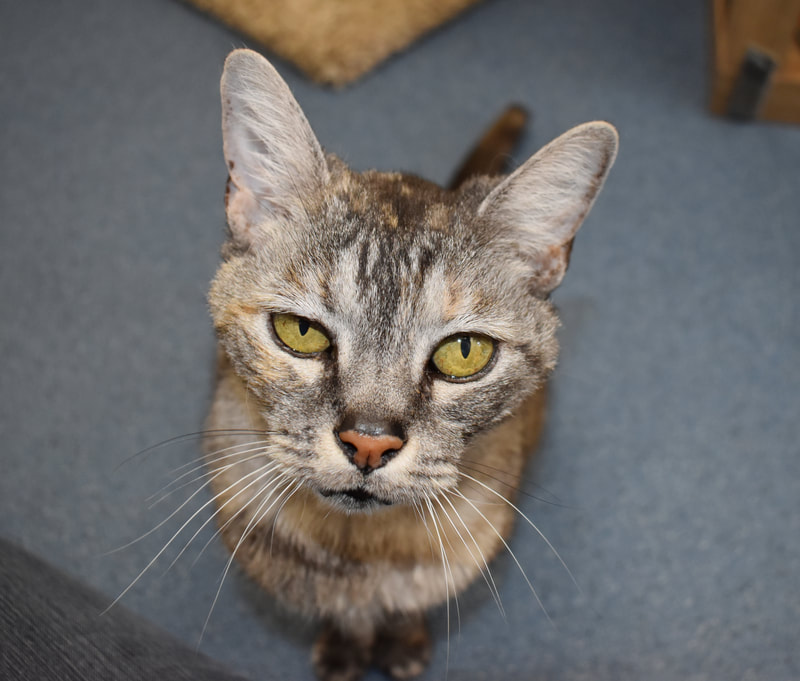 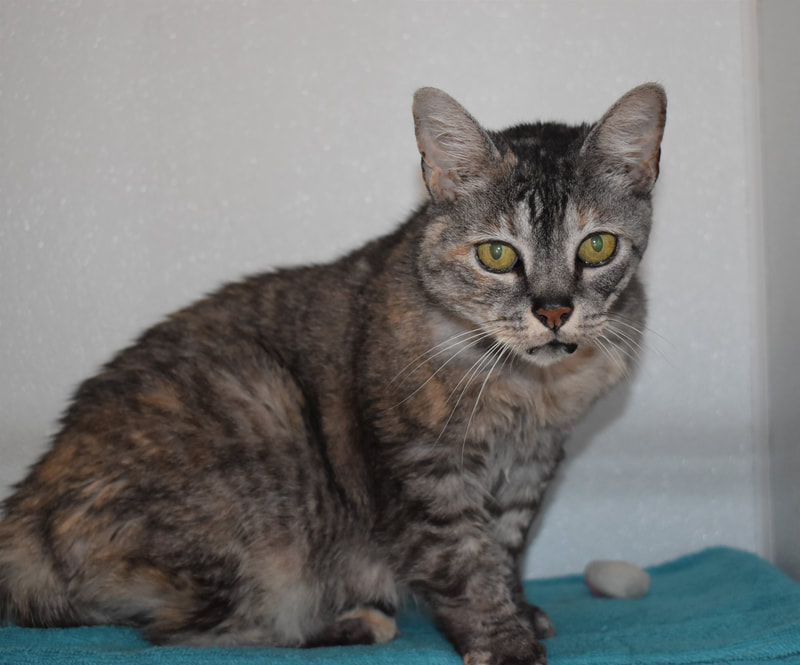 There she was, a demure little kitty at the end of the row. The one that everyone seemed to pass up. Too old and too many health problems. We probably would have said the same thing, but somehow, she seemed just right. We had just bought a house but we were a little strapped for cash. A cat with all those health problems would be a bit too much. When the shelter asked us to foster Zola, we said yes.

The day before she was to come home, we got the news that Zola had a stroke. After a week at the vets, Zola had recovered enough that we could bring her home. She fell over a lot and had to hug the walls when she walked. We felt that she wouldn’t last more than a few days. Those days passed and became weeks and then months and now over a year and a half later, she’s still going. There have been some lasting effects, she drools when she’s happy and she drools a lot. She can’t groom herself, so we have to do that for her. The stroke had turned her soft mews to something more akin to a cross between a screaming baby and a hyena. But one thing that wasn’t broken was her purr.

We now found ourselves on better financial footing and we were ready to make it official. We signed the adoption papers. Zola was officially home.
Sophia and Callie (now Annie and Lola)
-Adopted by Barbara and Hugh Mellert

We are so happy with our baby girls, Annie (Sophia) and Lola (Callie). They initially were very shy but little by little are taking over the house! Lola is the bold calico – both in coloring and in personality. She’s a bundle of energy! Annie is our dilute calico – she elegant and somewhat quiet but Lola can always coax her into something.

They are *excellent* work partners! We couldn’t be happier with our beautiful girls. We’re very grateful to Kingdom Animal Shelter, particularly Julia, Helen and Pat for their care and for trusting them to us. 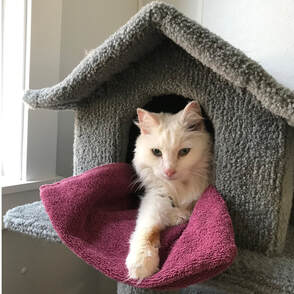 Chrissy is an older girl who is in her forever home. Since she has gone home, Chrissy has gained some weight and is looking very healthy. Chrissy is still taking her glycoflex with her family feels is making her more spry.
​
Chrissy sleeps with her family in a queen sized bed, right on top of 2 pillows. The husband and Chrissy are "best buds." Chrissy seems to be happy as an only cat,  she is being spoiled and is loved.​ 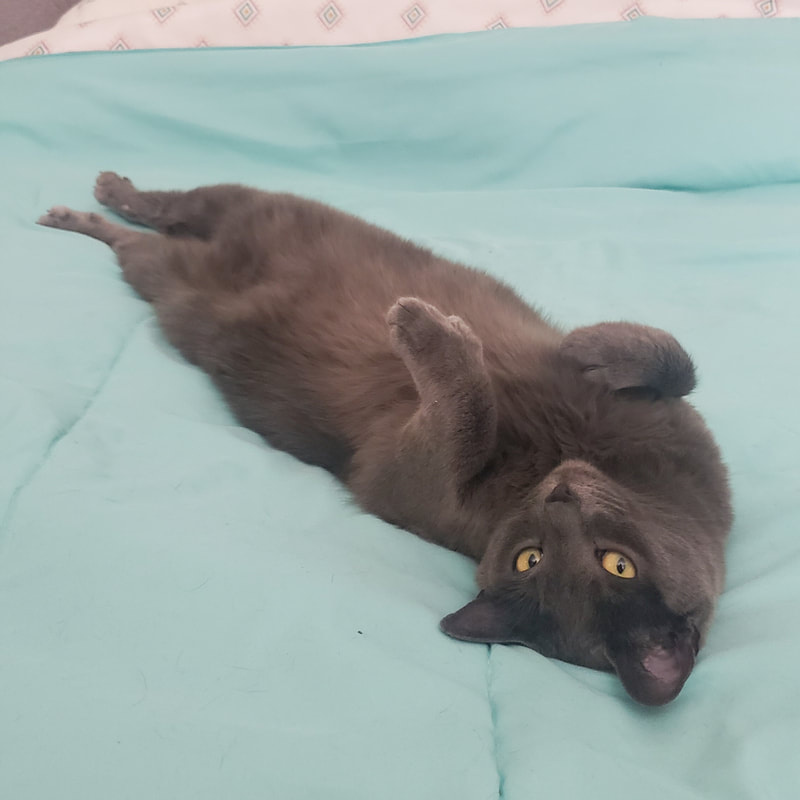 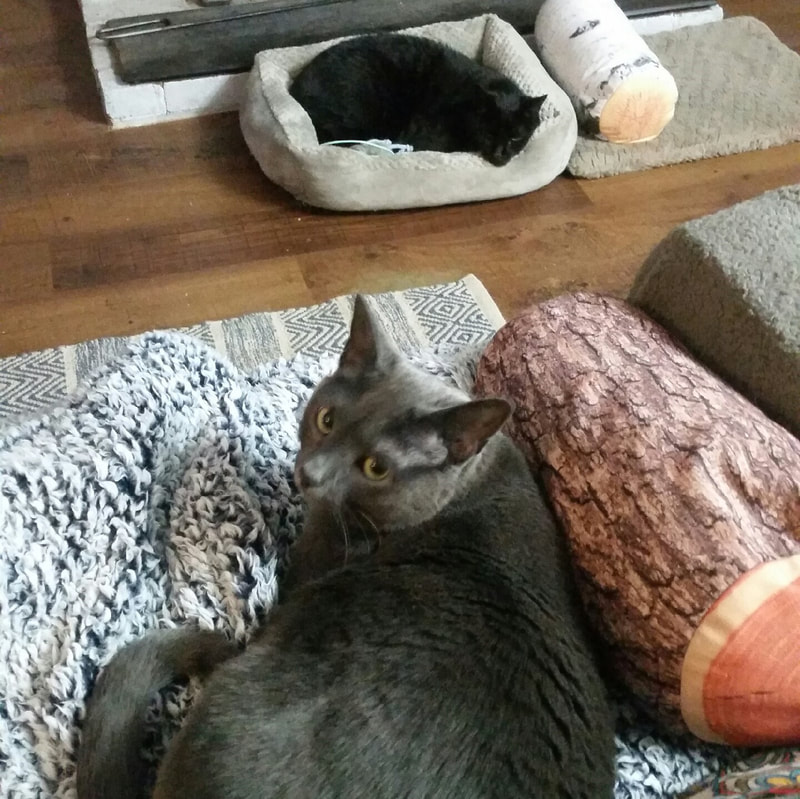 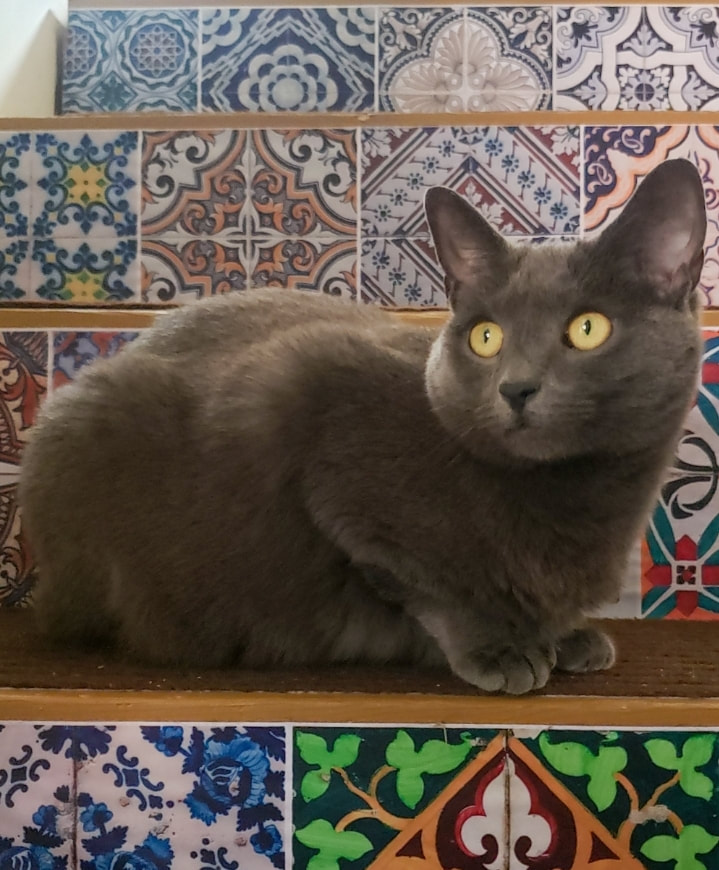 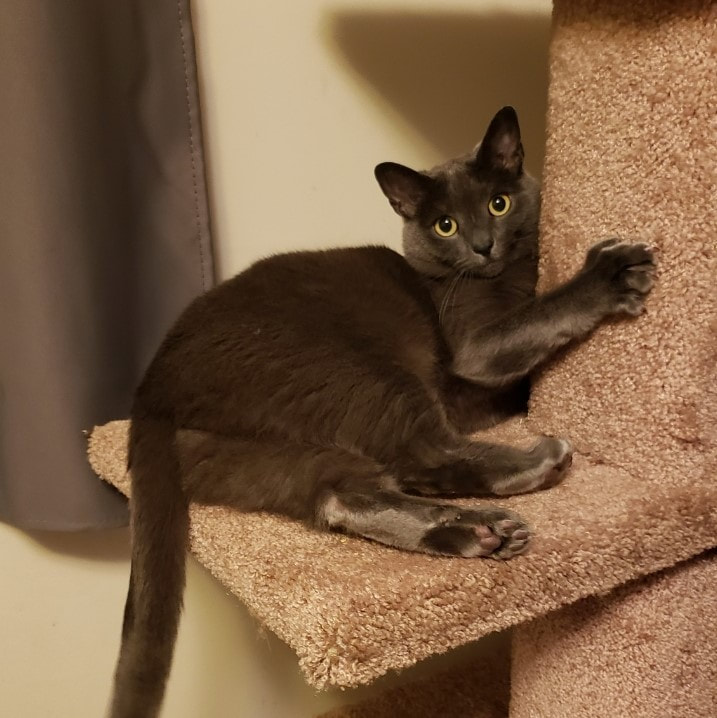 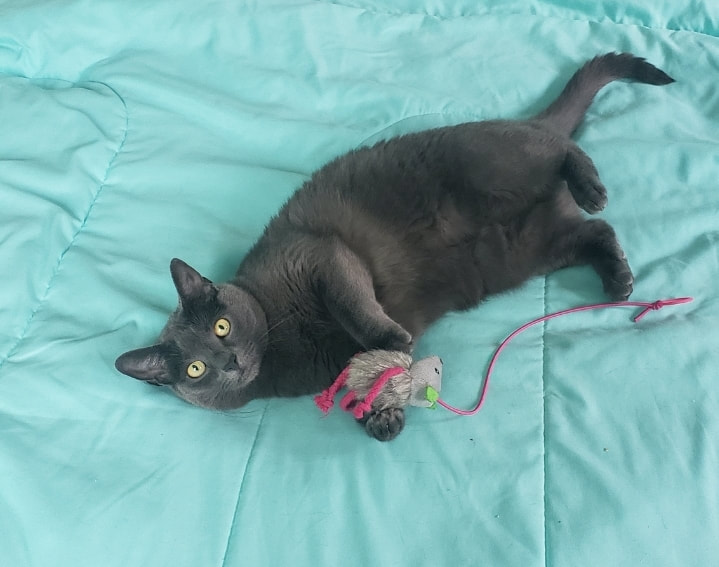 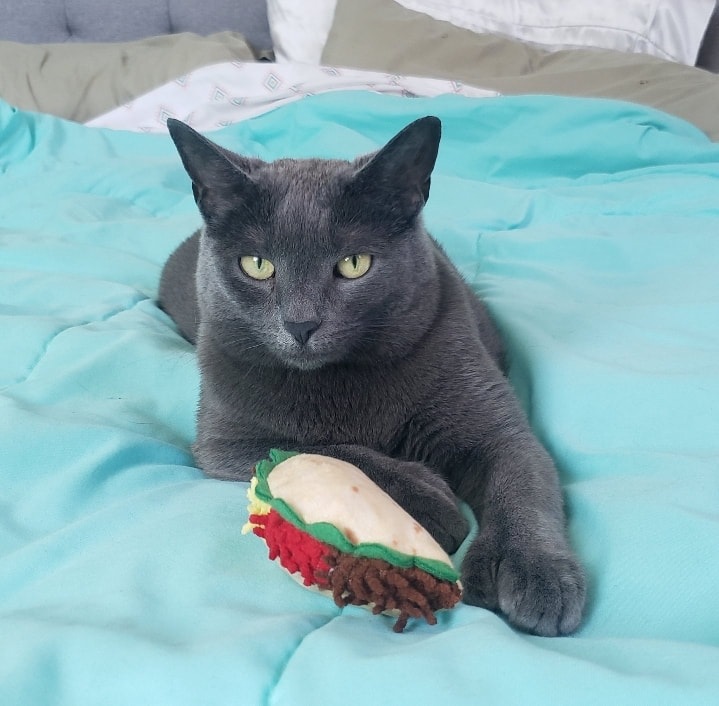 Ruby
- Adopted by Lee Cooper
​
Hello!
It was wonderful to meet you both yesterday! Ruby was so talkative on the ride home. Once we got her home and into our bedroom/her basecamp, she immediately came out of the carrier and was exploring the room. Within five minutes she was in my lap purring! She ate her dinner with gusto and used her litter box without issue. She slept with us almost all of night, including under the blankets for part of the night. She is an absolute doll and we love her so much already! Rowdy has smelled her blanket and is very intrigued! They were both playing on opposite sides of the door!

Thank you again for all that you do for these precious creatures.
​ 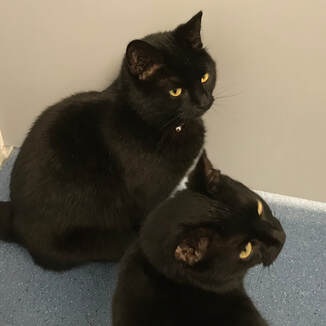 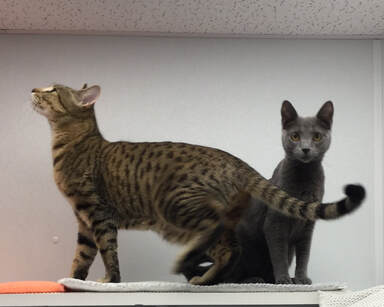 Falkor is a gorgeous, very large, spotted boy.  He and his “sister”, Atreya, a beautiful, petite grey girl, went home together.  They had lived in a parsonage in a nearby town, but the family sadly was moving and had to give them up.  In their new home, Atreya snuck out one day, and was found shortly thereafter in a church.  Seeking spiritual guidance, a taste of her past??

This from Marlisa:
The kitties seem to be settling in.  I brought them to the bedroom to let them out and they explored the room for an hour or so.  They had seen in passing one of my dogs, Abbigayle.  She has taken to them quite nicely, even getting a good morning kiss from Falknor this morning.  I did not have my camera ready so no picture of that but it was cute.  He has been the friendliest so far.  They both explored the upstairs for a few hours but they wanted to see where I was going down stairs and Abby could not wait to meet them last night, She sat whining at the top of the stairs—as you may recall I said I got her from a former coworker at Walmart and she had been with 2 cats and another dog.

Atreya seems to like the downstairs with the many places to hide and been in a darker area, though she does wonder around and lays on the stairs to watch us.  Falknor came in as we went to bed last night, jumped up in bed, laid on me with his face up close to mine, let me pat him for quite a while, he enjoyed chin rubs all while purring as though to give his approval of coming home with me.  He laid on the end of the bed to my right side while both dogs were on my left.  Then I think he went to look for Atreya.

I have 4 specific cat beds and Atreya has taken to one of them near my washer and dryer and up about 4 feet.  I put one in a bedroom closet behind a clothe curtain – no door to it.  They have option of kitty pan upstairs or down stairs.  When I feed them they came separately so Falknor had all he wanted and so did she.

My sisters came down to see  me today and each took a turn coming into the house to meet them.  One sister said not only had they both come to her and she played with Falknor with the feather toy.  But Atreya even let her pick her up!  I have picked up Falknor and he has come to me and gotten in my lap, however Atreya has not.  When I had sent the pictures to my sister of the cats she said the gray one was hers!  I said oh no they aren’t!  heheh 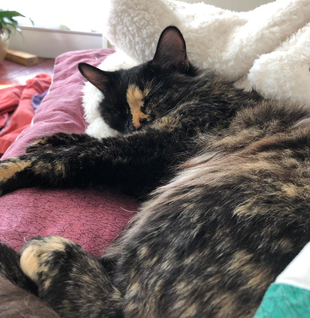 Mitten has been adopted by Monica from Vermont. Mitten went home on 4-3-21.
Mitten is now called Aster. I most recently spoke with Monica today. Monica said that Aster is doing great. Aster is very happy, her coat is smooth and very soft, Aster is playful and affectionate. There are no issues with the litter box and Aster is a great eater! Aster went to the vet recently and the vet thought she was great and could even be younger than our records state.

Update from 4-4-21:  Mitten has transitioned seamlessly! She hid for approximately 30 seconds and then was out and about and ready for attention! She was a little revved up after the car ride but she seems very relaxed and happy today. She is eating normally, drinking plenty of water, and using her litter box, too. Seems like she has found her favorite perches in my room and is soaking it all in.

She’s eating, using the litter box, napping, and playing! We are having a great time together and she is very cuddly and affectionate.

She is exploring the rest of the house at this point and is hanging out with my roommate as well :)

Her coat has also gotten smoother and shinier since she arrived, which I take as a great sign she’s feeling comfortable and healthy.

Aster is very content and doing great. I’m loving having her here with me! We are spending a lot of time together. She’ll be going to the vet on Saturday for a check-up!

Update from 4-25-21:  Aster is doing terrific. She did very well at the vet, who said she’s in great health, and we decided to keep her on the same food. She has some favorite toys by now and carried them around the house cutely. We are really enjoying her!