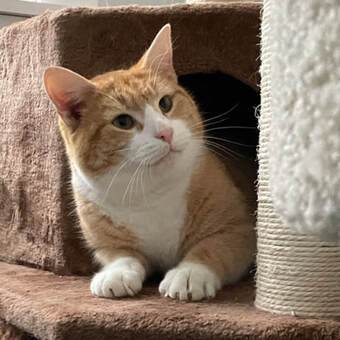 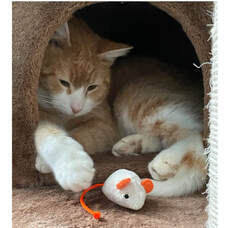 2-year-old Caleb was found as a stray in the middle of winter, starving and extremely scared. He was not street-savvy and barely survived by eating bread crusts at a bird feeder.
Terrified but safe in his warm room at the Shelter he disappeared without a trace during the first night. After a long search he was found hiding in the crawl space above the ceiling tiles. How he had gotten there was a conundrum, since the only way up there was straight up the walls and dangling with one claw on a skinny ledge on top of the door frame...

Back on the ground he was fearfully hiding in a cozy safe-cave for a month. Then suddenly he came out for pets to some of his caretakers who had been patiently attending to him. He turned into the sweetest kitty, playful, kitten-like, always a little shy of noises and strangers. But his prospects of being a companion cat started to glow. 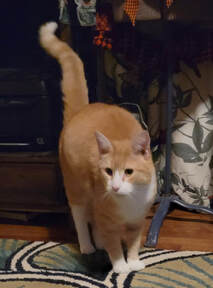 In April, Sheila and her daughter Caitlin from NH visited Caleb at the Shelter. He came out of his cave for them, enjoyed their gentle attention and pets. When he retreated, they gave him his space. They showed just the right sensitivity for a shy cat and let him be, but continued to talk to him. He purred his approval.
Caleb went home with Sheila and Caitlin on April 26th

Here is what Caitlin texted the next day:
"Caleb did well on the car ride home and initially hid when we got home. But he came out of the carrier very quickly and began exploring his room. He is smelling everything and investigating.
He does hide when I go in and out of the room as the door sticks a bit and makes some noise, but when I'm actually in the room, he comes out again."
A fantastic beginning! 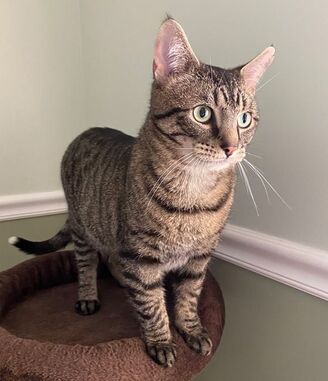 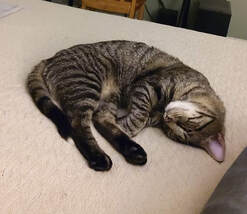 ​Lynx
​
Lynx is a very handsome young boy with little tufts on his ears. He appeared at the house of a cat-friendly person who promptly fell in love with him. But the resident feline housemates put their paws down against a new youngster, and Lynx had to move on to the Shelter to find a different home.

Lynx turned out to be delightfully calm and friendly. He would hop onto one's lap and just melt in as if he wanted to stay there for the rest of his life. He clearly needed an inexhaustible cuddle buddy in his forever home. 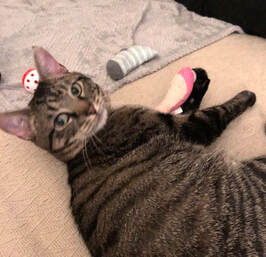 Patrick and Eve from NH were looking for precisely such a cat after one of their kitties had passed away. Many years ago, Patrick had had a very snuggly cat and wished to find a kitty like that again. Although they adored certain pure breed cats, in particular Ragdolls and British Shorthairs, they decided to invite a rescue cat into their family this time.
Lynx went home with them on April 22nd.

A few days later, Patrick wrote:
"Lynx is doing great here and seems to be settling in very nicely. It's hard to believe, but he is even more affectionate than what I had imagined. He's definitely a lap cat, but he's even more cuddly than that – when I lie down in bed (as promised, I'm sleeping in his initial safe room with him), he immediately crawls up onto my chest and snuggles into my neck with his little wet nose, just like a human baby, demanding two-handed petting and giving me lots of kisses and head bumps. After five minutes or so he'll then move to sleep next to my leg and that is how the first nights have gone. He's been glued to me all four nights and even slept on top of me for a couple hours one night.

He's been a very good boy, loves watching the birds play outside the window, playing with his toys, old and new, and just in general has been a great kitty (we just gotta work on the pouncing on my foot in the middle of the night, lol).
He lets me brush him and his coat is nice and shiny and healthy. 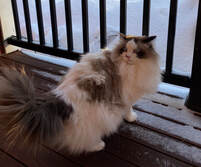 Princess
Our Ragdoll cat Princess, as expected, isn't as thrilled as the rest of us, but we'll get that worked out. Right now, the plan is to follow the cat-intro steps and just keep them separated for the first week and let them get used to each other's smell by swapping bedding. Lynx hasn't had a bad reaction to her at all. She's a bit grumpy and has hissed at the safe room door a few times, but that's her personality. She did the same with her previous cat friend Pooh Bear. 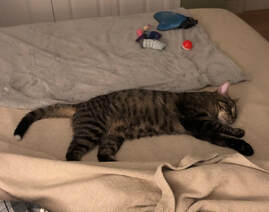 Gotta few photos for you: curled up next to my leg for a nap after a hard play session, exhausted after a morning play session before I have made the bed, a shot during another play session, and him hearing a robin chirping outside...

So, overall, he is doing just fantastic, seems very happy here, I'm with him all night long, and Eve and I play with him off and on during the day, and everything is going great. He is super loving and cuddly!" 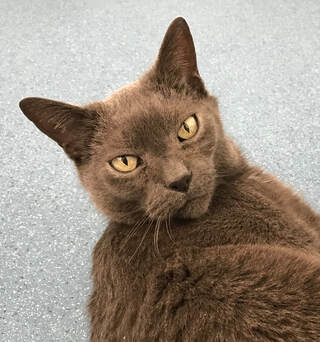 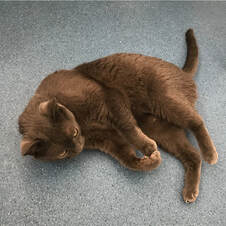 Shams arrived at the Shelter in January as a 14-year-old socialite. He was friendly, cheerful, outgoing and vocal, a handsome senior cat with the silvery plush fur that spoke of some Russian Blue heritage.

Shams was surrendered because his life-long family had to move and couldn't provide the space anymore where an energetic cat like him would have been happy. They were heartbroken to give him up and were hoping for another loving home for him where he could be truly happy.

At his arrival at the Shelter, a thorough medical exam by Dr.Sally revealed that Shams was anemic. For a while it wasn't clear if he had a serious disease that would shorten his golden years, but he recovered well with good medicine and food.

After 3 months of Shelter life Shams had enough. At the end of March, he got increasingly anxious for company, lap time and punctual meals. He would scold his caretakers loudly for not serving him his food first and not hanging out with him enough, he was longing so much for a real home. 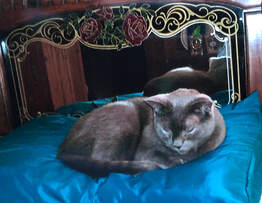 Right at the time when things got to a painful point for Shams, Carrie from Barnet, VT came to his rescue. She had visited the Shelter and quickly decided that Shams was the one for her. She took him home on April 8th and everything was peachy from the start. Shams slept in Carrie's bed that first night, draped around her head, and has done so ever since.

Shams couldn't be happier. Carrie works only part time and is much at home with her Shams. He loves to cuddle in her arm or sit in her lap, purring. When she holds him, Shams snuggles his head into Carrie's shoulder in total bliss.
He likes to make his rounds through the house by walking only on highways on "Sham's Loop": from a small table up on a counter, onto the dining table, over to the couch, along the windows and back...

At the end of Sham's Shelter residency, he had missed the litter box a few times, which cats detest doing, but they choose this as a last resort to make their stress or pain known. In his new home Shams shows perfect litter box behavior, a sure sign that things are great!

Shams appreciates his food and gets it on time just as ordered: No more competing with other kitties, what a relief!

Carrie says "Shams is so good, I really love having him!"