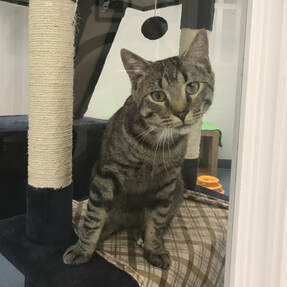 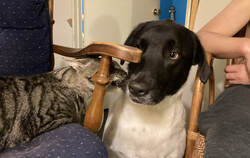 ​Aqua
​
Young Aqua grew up as a single kitten in a large family with dogs, thinking that he was a puppy. His best friend was a gentle young Pitbull and the two of them would rough-house and wrestle each other, just like puppies do. Tiny Aqua would put his head into his friend's big teethy mouth and would pull lovingly on the dog's lips.
When he was grown, he didn't know how to behave with other cats in the neighborhood and would scare them with hunting behavior. He was surrendered to the Shelter because he would frequently escape out of his home, travel several miles and harass other cats in the neighboring village until an animal control officer picked him up as a "menace".
His family felt that they could not keep him safe and would rather see him adopted by someone who could keep him indoors, where he would have a chance of a long and happy life with lots of play and socializing. 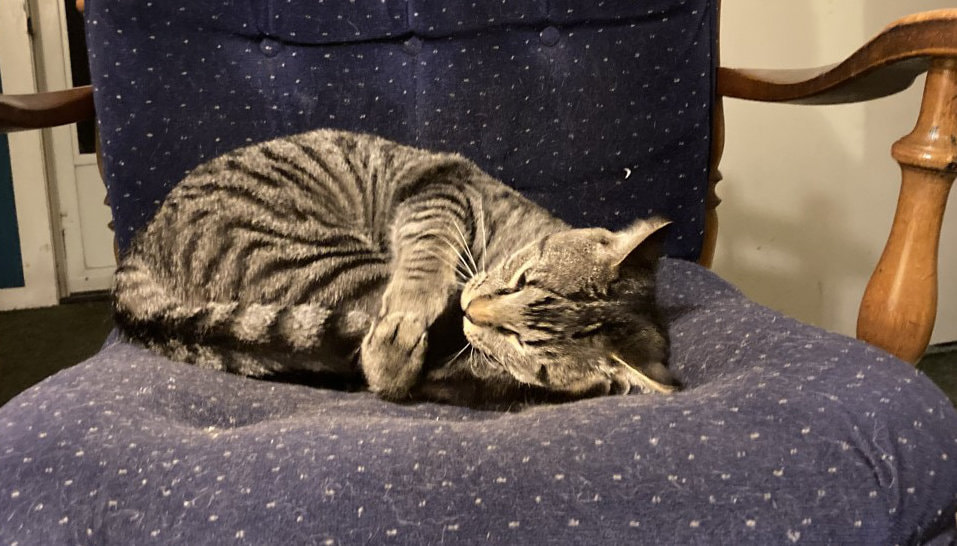 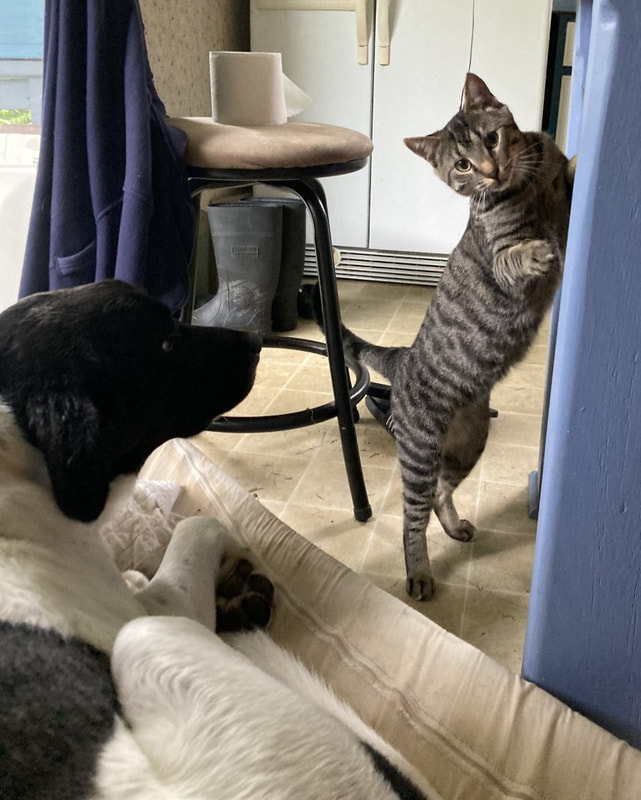 Tara, Kyle and their young dog Vilo invited this great, intelligent cat into their family. They vowed to keep Aqua out of "jail" and called him Brian for his fresh start in life. Brian made himself right at home.
On August 30th Tara wrote: "Brian is doing great! He totally has gotten out a couple times, but we stayed calm and just picked him up. He’s been good!!!
He has claimed his chair, and enjoys snooping around, playing with Vilo’s tail (as well as his own) and just generally being a sweet boy. We feel so lucky to have him!" 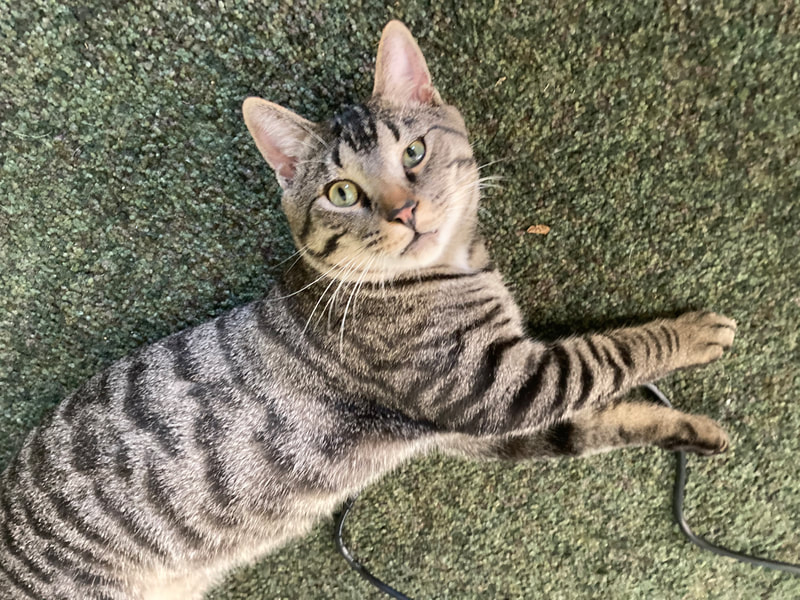 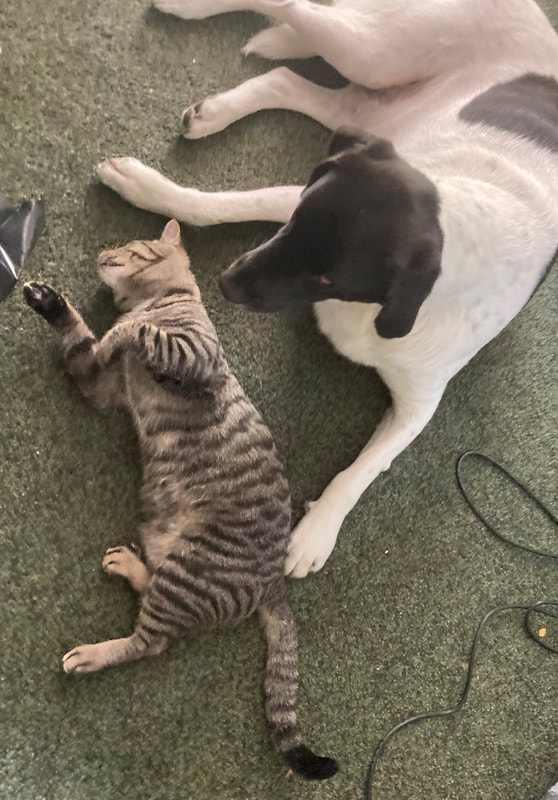 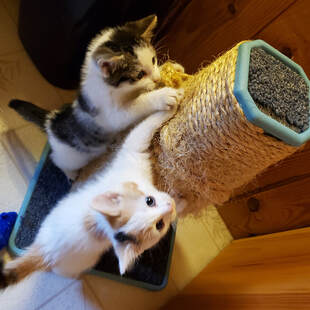 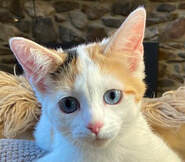 Blue-eyed Callie and cuddly Cookie were such snuggle bugs that only a family of several cat-lovers would do to keep up with their affections. These siblings were so well socialized by their foster families that they would make wonderful companions for a family with children. Accordingly, the kittens were thrilled to find their forever home with Krissie's family in Danville. 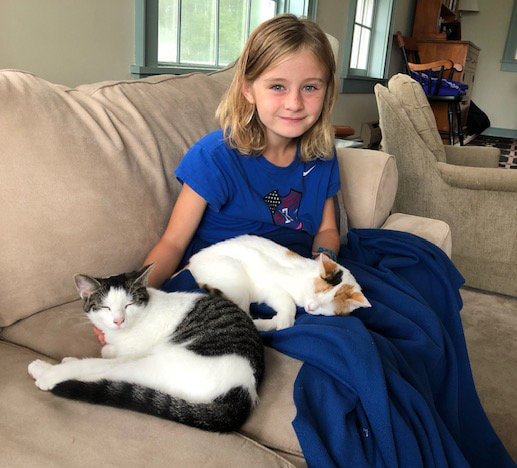 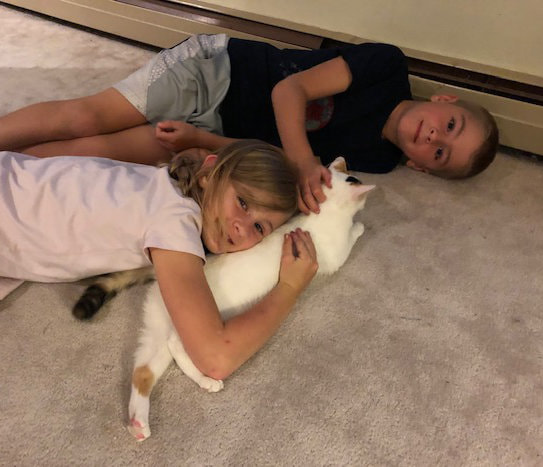 On September 3rd Krissie wrote: "We officially adopted Cookie and Callie from KAS on August 20 and could not be happier with the two new members of our family. They are our first family pets and our children, ages 9 and 7, are learning how to take responsibility and care for living creatures. Cookie and Callie are affectionate, playful, and entertaining. They love to be around us and purr constantly. We say every day that adopting cats was a great decision and we are so lucky to have been matched with our two kittens."
​ 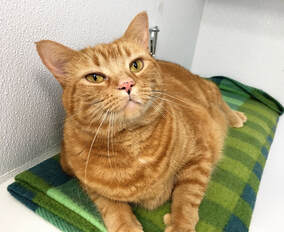 Daffodil
​
6-year-old Daffodil found a loving home with senior citizen Kathy in Waterford, Vt. Daffodil is a sweet lap cat who longed to find her very own person in a quiet household with a window perch and lots of cuddles. Her dream has come true ❤️. 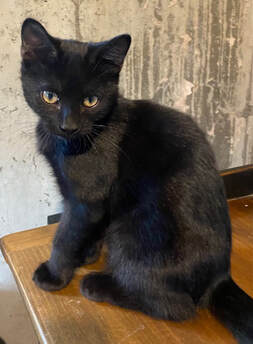 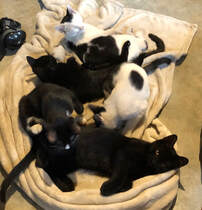 ​Little black Onyx was surrendered because her older feline housemate Ruger couldn't keep up with her playful kitten spirit and got very anxious around her. Onyx needed some energetic kitten friends and found them at her foster place in a gang of five great youngsters.
Kittens thrive best in the company of cats of their own age, and Onyx was no exception. Although smaller than the others she would hold her own during playtime and would blissfully sleep in a warm furry heap with her pals.
​
​Victoria and Josh, a cat-savvy couple in Lyndonville eyed her on the website. They hoped that Onyx might be a companion for their 3-year-old daughter Hadley, who had grown up with the two adult family cats and had learned at her young age to have a gentle and loving touch with them.
During the adoption Zoom call Hadley was beaming with delight and showed us her collection of plush cats. Surprisingly, Onyx stayed at the computer screen the whole time during the call, while her foster siblings got bored very quickly and scuttled off to play.
Onyx went home with her new family on August 26th and was named Lilith. 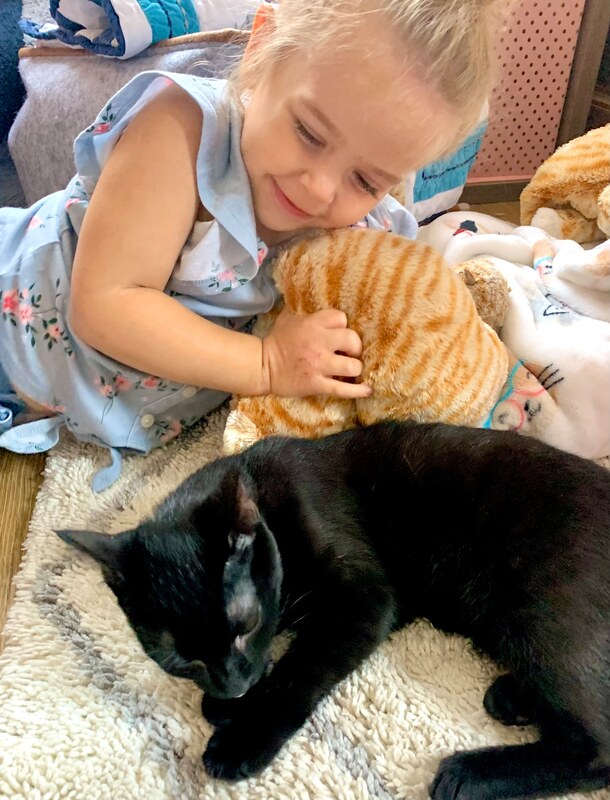 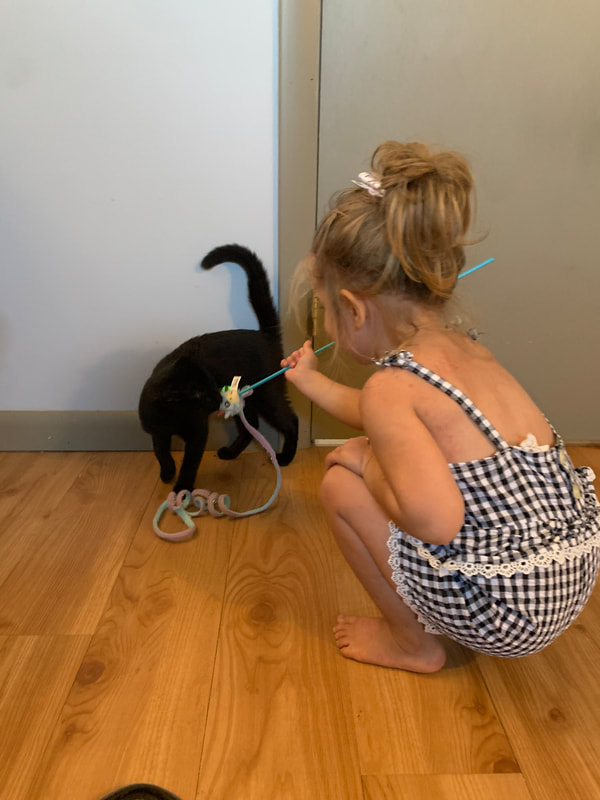 On September 1st Victoria wrote: "We were looking to find a best friend for our daughter Hadley, and what we found in Lilith is so much more. The bond these two have formed in a weeks' time is beyond anything we could have imagined. We love Lilith and had such a great experience adopting from the Kingdom Animal Shelter! Thanks again!
But in all reality this adorable little kitten runs this house! Our three cats all finally coexist in peace after some initial hissy fits, and Hadley has her best friend who loves to cuddle so much and now sleeps with her." 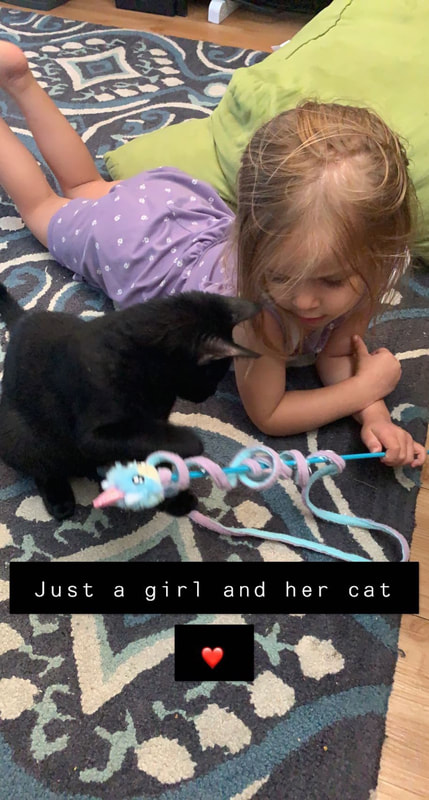 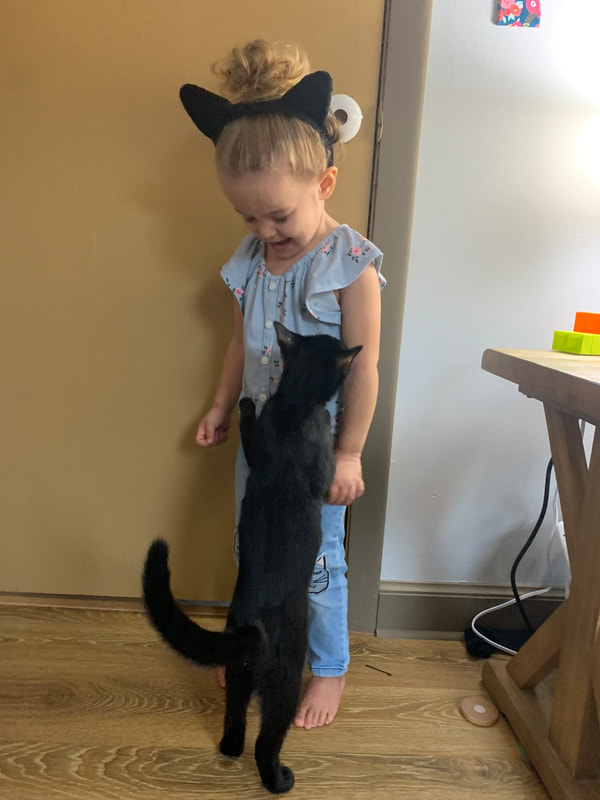 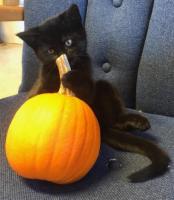 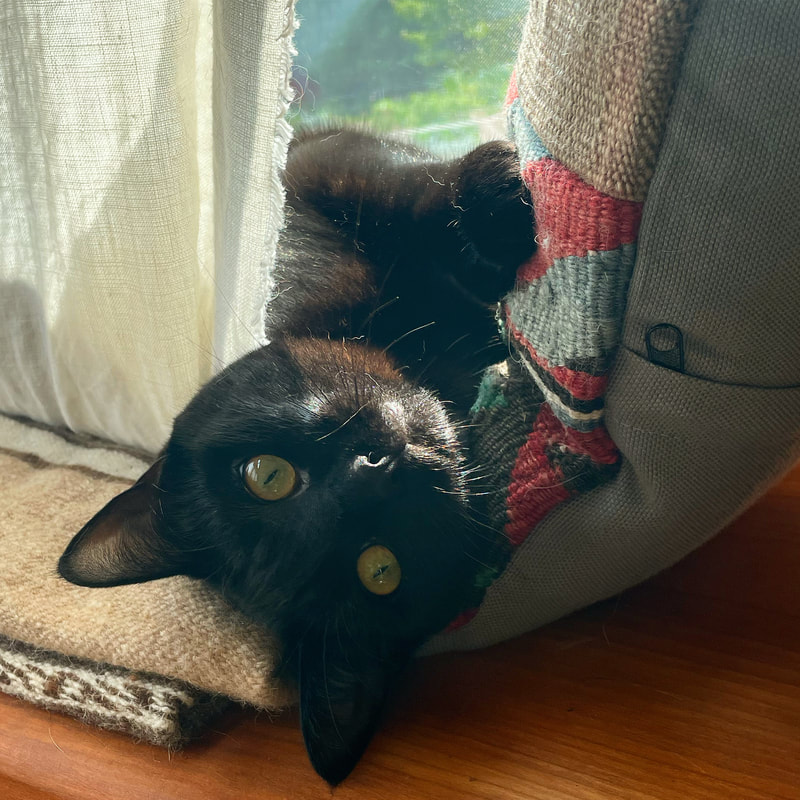 This wonderful black kitten was adopted in October 2020 and is now a fully grown sleek young lady.

Her family wrote on August 31:

Chimney turned 1 on August first! She had her special wet food for dinner with her siblings and she just loved it! She is a spunky, busy and a very loving cat. She loves both her brother Oddvar, and sister Curry. She sleeps in the sun even on the hottest days, catches any bug in the house however small and sleeps with us every night. She was and is still the perfect addition to our little house.

Thank you for all you do!