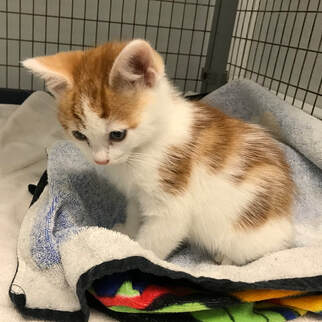 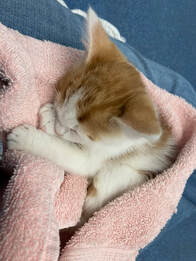 On Dec. 6, we took in an absolutely adorable 8-week old kitten, whom we named Peter.  Peter got his name because he hops like a bunny.  Baby Peter, as he has now come to be known, also has no tail.  We often think of that as a cute feature.  But in fact, it sometimes brings with it some serious challenges.  Baby Peter can’t urinate or eliminate stool on his own, at least, not at this point.  And so, when he came to us, though he was so affectionate and purred constantly, he must have been quite uncomfortable, full as he was of waste that needed to be out of his body.  And of course, he then wasn’t feeling too well, so he wasn’t eating much.  Dr. Melora Hunt took him home and sedated him and cleaned him out.  He felt much better…and was so exhausted from his discomfort that he slept a long time.  Melora put Peter on a med, Cisapride, to help him eliminate stool.  And she also added Miralax to his regimen.  Upon his return to the Shelter, with  volunteer hearts melting rapidly, Peter got lots of loving time and care.  But still he wasn’t able to urinate or defecate.  Dr. Sally has been working with him, expressing his urine on a daily basis.  Peter is eating much better now…diving right into his slurry of Fancy Feast kitten pate.  Sally is trying to teach some of the volunteers how to express his urine for him.
Volunteer Fran comes in almost daily to read to Peter and hold him. 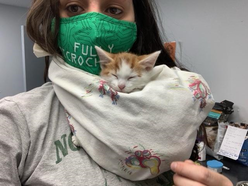 Volunteer Christine N. has made a sling to fit around her neck so that she can carry him close to her while she does morning duty.  From Christine: “He sat in there and purred the entire time. He is such a magical baby. “

​We are all hoping for the very best for Peter…carrying him in our hearts…that he will be able to live a life surrounded by love and understanding. 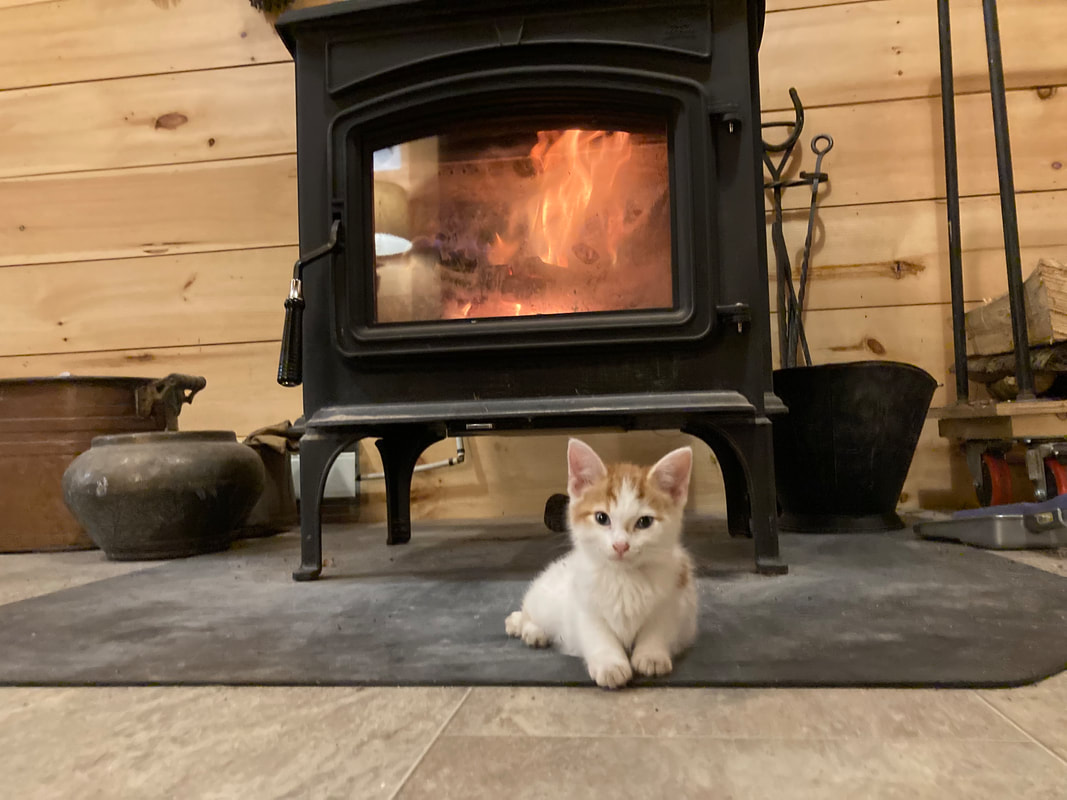 This from Dr. Sally:  Peter is a very new intake with very special needs, with Manx syndrome causing spina bifida and associated fecal and urinary issues. His mobility is pretty good, a positive sign. He’s a beautiful bundle of purring joy who allows himself to be treated which is also a positive sign. Time and developing a treatment regimen that works for him is the plan with the goal being that he can comfortably be who he is supposed to be. ​