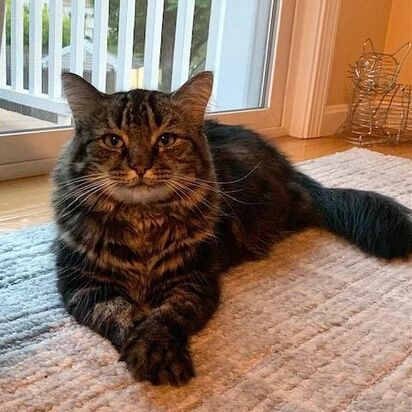 ​
​Celebration of Sheldon
-The Bernstein Family

We adopted Sheldon from KAS in September 2021, just a short month after losing our beloved cat of 17 years, Nemo. Our hearts were broken and I wasn’t sure how long it would take before we would want to adopt another cat. But it was clear to us very quickly that a house is not home without a pet to love…. How empty our house suddenly was.

I soon began poking around on pet adoption websites and stumbled on this photo of a cute bear of a cat named Sheldon at KAS. What a handsome kitty!  He has this serious (yet goofy) face and just looked like the softest thing you’d ever seen. He had arrived as a stray at someone’s barn and apparently wasn’t getting along with the other cats and found himself in the shelter shortly thereafter.  His story tugged on my heart strings as it seemed at first that KAS wasn’t sure if Sheldon could be socialized enough to be adopted… they thought he may have to be a barn cat forever. Humans were new to him and it seemed he had never lived in a home. But after months and months of work with him in the shelter, he seemed to be getting used to people and was enjoying some attention… he was coming out of his shell.

We drove the two hours to the shelter to meet him. He had put on a couple of pounds since his photos had posted and was cuter than ever. We were able to have a visit and sit with him and just pat him. He was really shy and didn’t engage too much (he never left his spot), but he didn’t run and hide either. We even heard a little purr which was encouraging. We couldn’t really resist him and felt it was a good match so two weeks later, we drove back to adopt him and bring him home.

Those first few days were exciting for us, but he was clearly very afraid and very shy. We put him in a small room with the litter box, food, and a bed along with his favorite toys and favorite kitty tower/bed that KAS gave us (thank you) and let him get comfortable. We spent lots of time in that room with him, just visiting and talking and petting him and hanging out, and after 3 days or so we could get him to play a little.  But he was still afraid to come out of the room… and he never made a peep. He never meowed or cried or anything, but he also never hissed or scratched. He was being such a good cat, but he seemed so sad and stressed.
​ 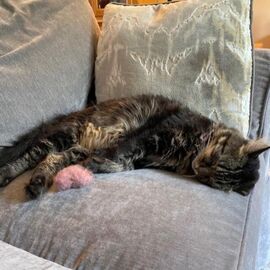 But as these things go, slowly over the next few weeks, he got comfortable. We were all in the living room watching tv one night when suddenly, one of my step daughters says, “Look.. it’s Sheldon.. he’s in the kitchen!”. Ok shhhh…. Everyone be quiet…No one move… Sheldon is IN. THE. KITCHEN. It’s a miracle! And it’s been nothing but progress since. To think we weren’t sure if we would ever hear him meow and now he is SUCH a talker! It’s been so fun to watch his personality come out and love him and play with him and develop our daily routines. He loves to play and run around the house at the speed of sound. He has his favorite toys which he will carry from one room to another and he has his favorite chair that he loves to sleep on all day. And like many cat owners, we no longer need alarm clocks… Sheldon knows when it’s breakfast time and will come wake us when he wants food! 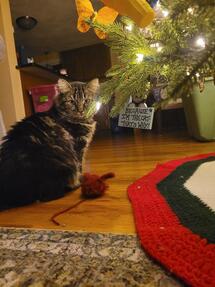 He greets my husband every night when he walks in the door and he adores when my two step-daughters are home. He will follow them around and they will play with him and brush him and he just LOVES the attention. In the summer, he enjoys laying in the sunlight by the sliding glass door and he watches the birds go in and out of the bird house. We have learned that he is afraid of thunder and heavy rain, but rather than hide under the bed, he just goes to the main hallway and stays there... someone must have told him to stay away from the windows! He loves his breakfast and dinner and at times, I wonder if he is still surprised that food is given to him every day…. He never leaves a crumb and is soooo happy at meal time.  What a ham he can be when he’s hungry and his humans have come to bring him food.

It’s been over a year now and we still see changes. He will come up on the couch now and watch TV with us. He sometimes needs coaxing, but he’s coming up more now on his own. On the weekends he will jump in the bed in the mornings and purr up a storm and snuggle until we get up to feed him. We can even pick him up now, which I wasn’t sure we would ever be able to do (although he does appear to be afraid of heights and prefers ground level!). He’s a wonderful cat with fabulous kitty manners, the softest fur and truly not an ounce of aggression in him. Given where he came from and his lack of human contact, I think this says so much about the care and love he got at KAS. Sheldon’s barn days are definitely over … he’s now living his best kitty life!