Some 16 years ago, Cinco lived in a cat colony down on Bay St. in St. Johnsbury.  A very kind man tended to that colony, feeding them, trapping them, getting them spayed/neutered, tested, and vaccinated.  He did this for 12 years.  Some of the cats disappeared, new ones came.  But Cinco was steadfast.  He was laid back and knew to lay low and not challenge.  Then about 4 years ago, Cinco was trapped...and brought to our Shelter.  He was quite shy but not aggressive.  He was just a very quiet boy...and at times, other cats would visit him in his condo and hang out, have breakfast with him.  And he was mellow with that.  And on occasion, on our camera videos, when no one was in the Shelter, he would be filmed playing with various toys, or rolling around on the floor in what looked like abandoned bliss.  But he would never show these to the humans that came to tend.  Occasionally he would allow petting.
And then a wonderful ray of sunshine appeared in January 2019.  Robin Castle came in to meet Cinco...and she fell in love.  And thus began his journey...which Robin tells in “Cinco Comes Home”.
In these times, when we are home a lot...a nice cup of tea and a good read might just do the trick.  So, enjoy. 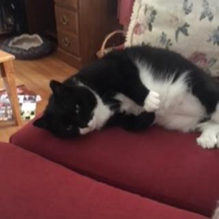 January 19, 2019: It was a cold day and a long ride from St. Johnsbury to Barre.  As soon as I shut off the engine I could hear Cinco’s fast breathing, like he was in distress. Cinco was home, but all he knew was that his whole world had been turned upside down – yet again.
I set him up with his carrier in my upstairs bathroom, which is a warm room. He had all he needed there including his food and water, his litter box and a soft bed. I came to visit him frequently in his first week. I reached into the carrier and stroked his head, talked to him, read to him, and just sat with him. I’ve had cats my entire life and thought I knew them well. When I was a kid, we had barn cats and some needed time to trust people. I felt up to the task of taking care of a once-feral cat, but had not considered just how long Cinco lived outside without regular human companionship.
Then my vacation was over and I was gone to work all day, but continued to visit with him as much as I could. I realized early on that Cinco would need lots of time and space, but my idea of how much time he would need was quite different from his.
He started coming out of the bathroom and exploring the house after a month or so. I could hear him running around downstairs and would find my throw rugs discombobulated the next morning. He had plenty of toys and he seemed to be enjoying them, but he didn’t want me around while he was out of his carrier.
In May, he discovered a spot under my bed that felt secure to him and would only come out when I was not around. We had a dark period where he just hid under the bed and I could not even reach him, much less pet him. I pushed soft blankets under the bed to provide an alternative to the cold floor.
One night in July he started howling like a wolf! I was at a loss to explain his behavior as he came up to me while I was laying in bed, looked directly at me and vocalized as if he was trying to communicate something. I consulted with Helen at KAS – was this him warming up to me or was something wrong? She suggested a urinalysis and we found that he was suffering from a UTI. This felt like a turning point that he would let me know something was very wrong – but once he felt better, he went back to hiding from me, only hanging out under the bed or in his carrier. 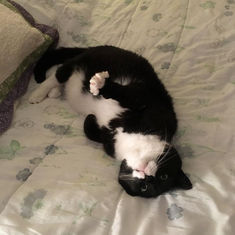 I became aware that he was teaching me patience and compassion. I was lonely for a cat to hold and love up, but he liked more subtle forms of affection – and only on his terms. Sometimes he would bite or scratch me without warning while I was petting him and I wondered if he was just testing me to be sure I’d respect his boundaries, or if he was telling me again that he did not feel well. I would respond to a sudden scratch by raising my voice a little and then leaving his presence for a while. It hurt and was distressing to me, but I knew how important it was to respond as gently as possible. I would remind myself that his aggression was coming from a place of automatic fear and survival. I have often tried to imagine the life he led when he was on the streets. Where did he sleep? How did he stay warm? Did he ever feel safe enough to get a good night’s sleep? I also noticed that he had a tendency to watch my feet closely and I wonder if he had been kicked.
In late summer, he decided that sleeping on the bed was far better than under it. He started allowing me to pet him and talk to him while he was on the bed alone, but he has never once slept with me in two years. Once when I was in bed, he jumped up and meowed, but seemed very worried about what might be under the covers and jumped down when I moved. So for about 18 months a pattern held that he seemed content with. During the day, Cinco slept on my bed. At night, he slept on the downstairs couch. I joked with friends and co-workers that although he liked me when I was upstairs, he found everything about me suspect when I was downstairs. Mostly, he did not want me to pet him or come near him unless he was in his carrier or on the bed. 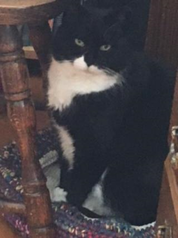 When I was assigned to work from home in March of 2020, I thought maybe my constant presence would put him at ease with me. However, for almost a year, he would come downstairs during the day only for brief walks around and if I spoke to him, he seemed not to hear. In fact, for a long time I thought he was nearly deaf because he did not react to the sound of my voice. I assumed this was a natural result of his age, though a doctor told me that exposure to the extreme cold can result in hearing loss in people. Could this also be true for cats?
On February 8, 2021, I was sitting on my couch when Cinco walked up to me and wanted me to pet him. This was the first time he approached me for attention since he was sick with the UTI in the summer of 2019. Naturally, I worried that he was sick again, but he seems fine though he is a changed man. He approaches me every day now – while I’m sitting at my desk working or while I’m on the couch. The other day I was lying on the couch and he came over and looked me up and down, as if to say “move over and give me some room!” So I sat up and he jumped on the couch to lie down next to me.
Cinco may never want to be on my lap, or want me to pick him up – these are things I accept about him. I am not complaining. I love that he now responds to the sound of my voice and seems to finally know that he’s home. The miracle of his decision to trust me is like a flower blossoming after a cold winter.