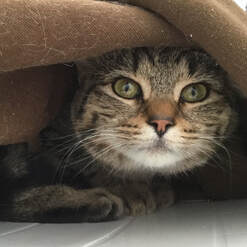 Little Cricket came to the Shelter when she was 7 months old. She was rescued in January by a kind person who lives near a barn with a feral cat colony in North Danville. Cricket had wandered over to the house and was unusually friendly, looking for human company. She had hit the right address where she would be warmed up, fed and loved, although the resident house cats were tapping their claws for her to be surrendered ASAP.

At the Shelter she was very shy at first, hiding under her special blanket, but soon her curiosity and friendliness took her out for new adventures. Her cat neighbor Ruby was very scared of other cats, but Cricket was so polite and playfully innocent that she was able to make friends with her. She was cheerful, she greatly enjoyed her meals, let Ruby sleep in her bed, and she greeted the Shelter volunteers at the door like a puppy.
We knew then that she would do well in a new exciting home with many friends. We were looking for a diverse, loving family for her.
​Cricket was adopted in mid March by Bobbi from Concord NH. Bobbi was hoping to find a sister and playmate for her big tabby boy Hampton who was very lonely for cat company.
During the first few days Bobbi reported that Cricket was scared and hiding in her safe room, but on day three she came out to sit on Bobbi's lap, making biscuits. Her new life unfolded from there.
​ 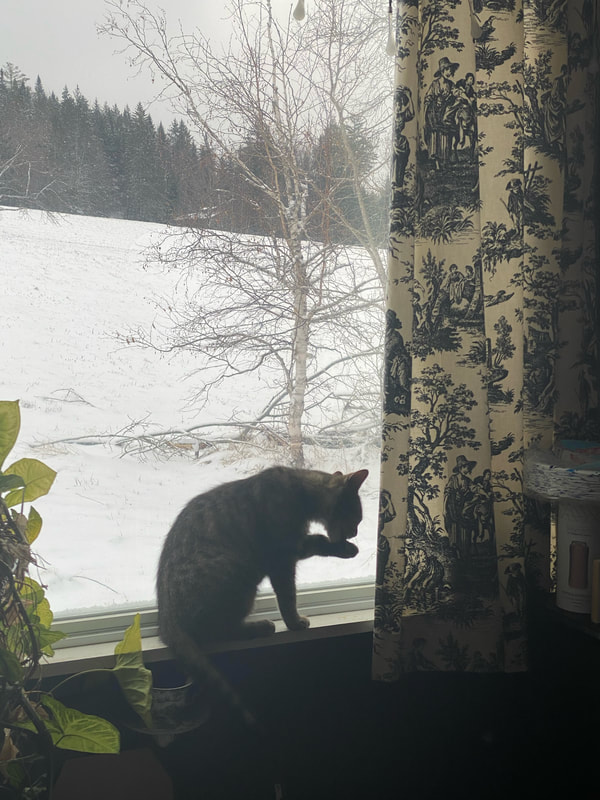 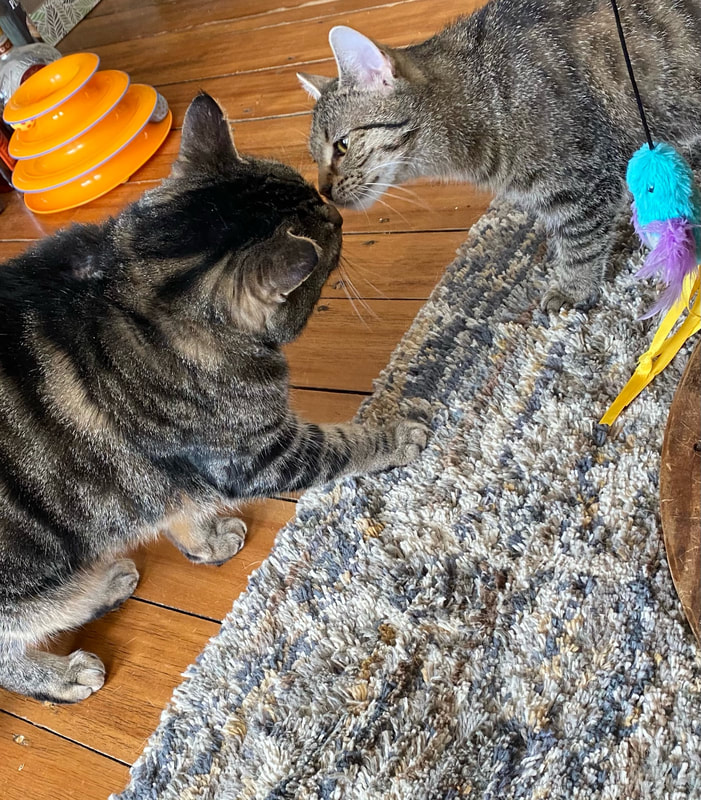 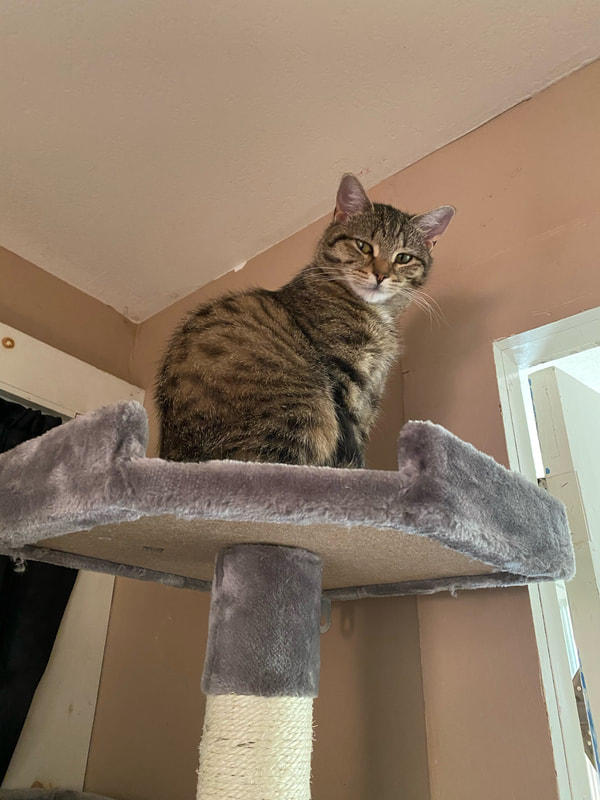 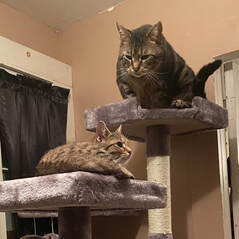 ​On April 2nd Bobbi wrote:
"So... Cricket has become Pickle. I do not know how that happens, but it does. Miss Pickle Pie aka Cricket kitty is just the sweetest. She’s adjusting very well. Two weeks ago, she was very scared and now... she practically runs the show around here. During the first week her canned food was not that important to her but now? Well, now I see why you said food was the way to her heart. She knows when it’s breakfast and supper time. As I am writing you, she and Hampton are playing on the cat tree together.
​ 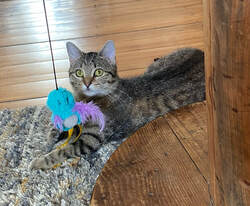 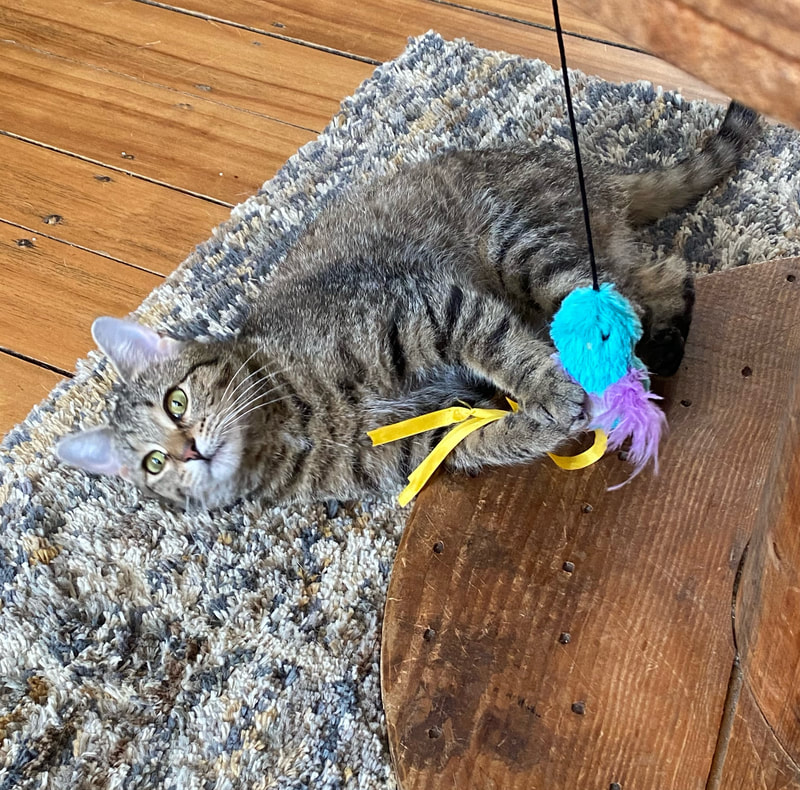 My boyfriend Jeremy is only home on the weekends so she’s still a little unsure of him. I have to use her bird toy to get her to come out when he’s around. Like with everything else it just takes time.

Still not much interaction between her and the dogs yet. Mostly exchanging of glances and meeting at feeding times. I anticipate soon enough we will have more “close encounters”. She’s a smart cat, she integrated herself slowly. It’s like no one really even noticed she was here and now she’s just a part of the daily routine.
I love how she gallops around the house like a herd of buffalo. Oh, and her purr is great. She purrs when she eats, when you pat her, when you make eye contact... so sweet." 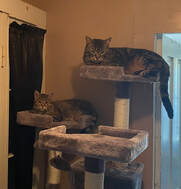 On April 13th Bobbi wrote:
"I thought you would like this pic of Pickle and Hamp. They’re getting pretty close which makes me very happy. She’s letting me hold her now. Before, she could walk on me or sit on me but no holding in my arms, and now I hold her every morning after breakfast for some quality patting time. She and the dogs are friendly, but I still haven’t captured any cute pics. All in time."​​