On a warm July summer day one of our volunteers passed by a house in Marshfield with a sign "Free Kittens". She knocked at the door and took the three remaining kittens home as Shelter rescues. They were sick with calicivirus in their early life and were treated successfully by our Shelter vets to become healthy, rambunctious youngsters with exceptionally high and cheerful kitten energy.
​
Elena

Elena was the most confident of her siblings. She went home with Judy in Danville, VT on December 18th to be the companion of another young tortoiseshell cat called Reese.
Reese was adopted a year ago from KAS.  She was found as a single kitten and didn't have the joy of a young playmate until Elena joined her family. Judy reported that the two are getting along great after some initial shyness. They look so much alike that they could be siblings. Reese is learning kitten-play with her new friend, and Elena, who is now called Ella, is loving her beautiful forever home. She is sharing a cat tree and racing through the house with her new sister,  and she loves watching the fire in the wood stove.
​ 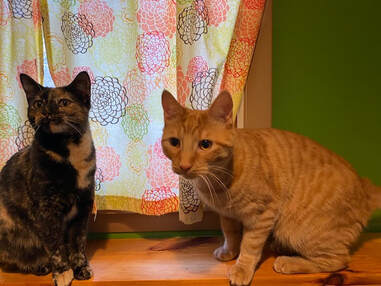 Jacob and Carmella were adopted by Meghan, Derek and their baby girl in Barre VT. They had been looking for a pair of lively kitties after their beloved senior cat had passed away, who used to zip and zoom about the house.

On January 13th they wrote:
The kitties are settling in quite well. They immediately figured out the basics like litter and eating/drinking which was great. They spent much of Monday and Tuesday in our basement family room behind furniture, coming out to play but being quite skittish, but they are really starting to come out of their shells now. ​ 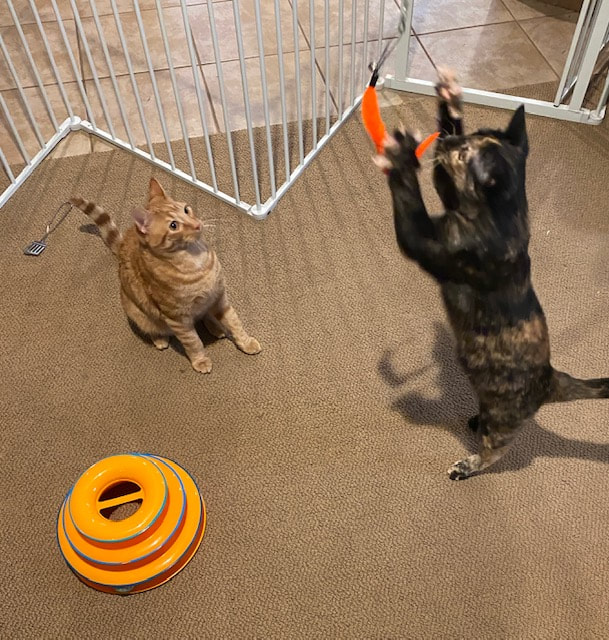 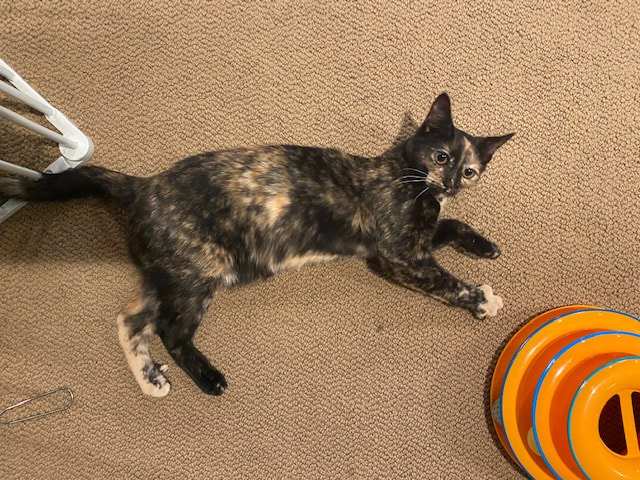 Last night they spent all evening hanging around us and playing - Carmella dragged a play wand across our living room, down two flights of stairs and into the downstairs family room!  They have also spent time on our bed each night but haven’t gotten to the point of sleeping with us. This morning Jacob decided to sit by Derek’s feet while working and made a brief appearance during a video meeting. Carmella also has decided that she would like Derek’s office chair as every time he gets up she jumps up on it. 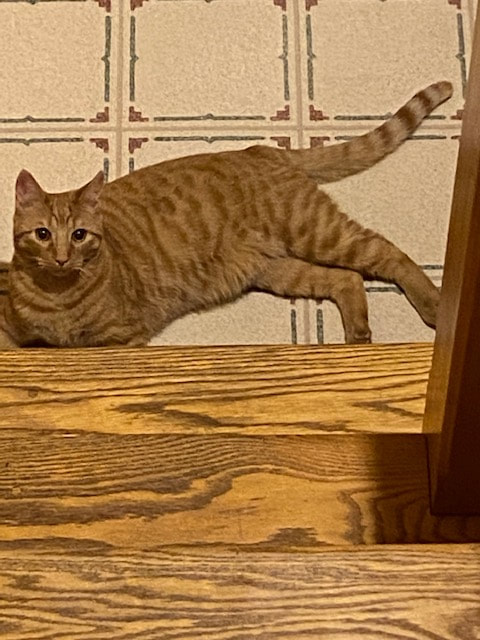 Lastly, we have decided to give them new names. We are both huge music fans and have landed on “Cash” and “June,” named after Johnny Cash and June Carter. It will take some time for them to recognize it (as much as cats recognize their names to begin with…) but we’ve started using their new names while petting them and playing with them.
Attached are a few photos of them making themselves at home. 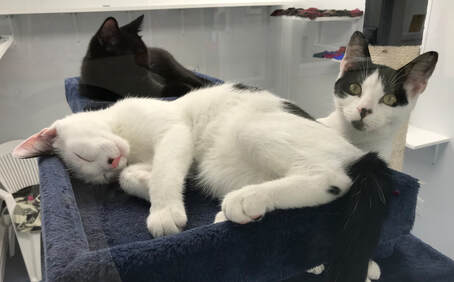 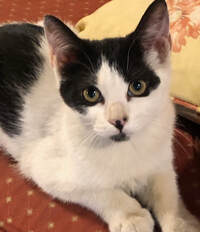 ​Emily and Mario
​
Sometimes it takes a while until certain cats find their forever home but it always is worth the wait!
Emily and Mario, who were trapped in a red barn in Cabot VT, became some of the friendliest, most social and human-bonded kittens of the year. They truly had star qualities and yet they spent several months at the Shelter and in foster homes until they found their forever home.

Emily and Mario were adopted at the age of 9 months by Angie and Brent, who have a lovely house with a fireplace and a large bay window with bird feeders in front - a kitty heaven!
They also have a dog, Uncle Buck, who is well behaved and who adores cats. He was very respectful of their previous elderly cats who didn't want to be bothered by him. There is a room in the house with a cat door that only their cats are allowed in, for litter box use and feeding. Polite Uncle Buck won't even go in when the door is open.
Angie and Brent first had their eyes on some other kittens, but when they heard about Emily's and Mario's exceptional personalities, they quickly decided that they were the ones and took them home for Christmas. 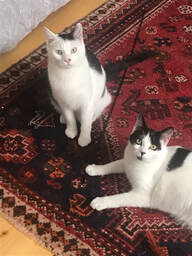 On December 24th they wrote:
"The kitties are settling in so well. They got used to their space very quickly and were ready to cuddle. They are eating, playing, and using the litter box. We tried a little face time, through a gate, with Uncle Buck. Emily was the bold one (of course) and came out to sniff a little bit. Uncle Buck was very calm and had great body language. So, all good so far!
Thank you so much for bringing these little Holsteins into our lives. They are lovely kitties." 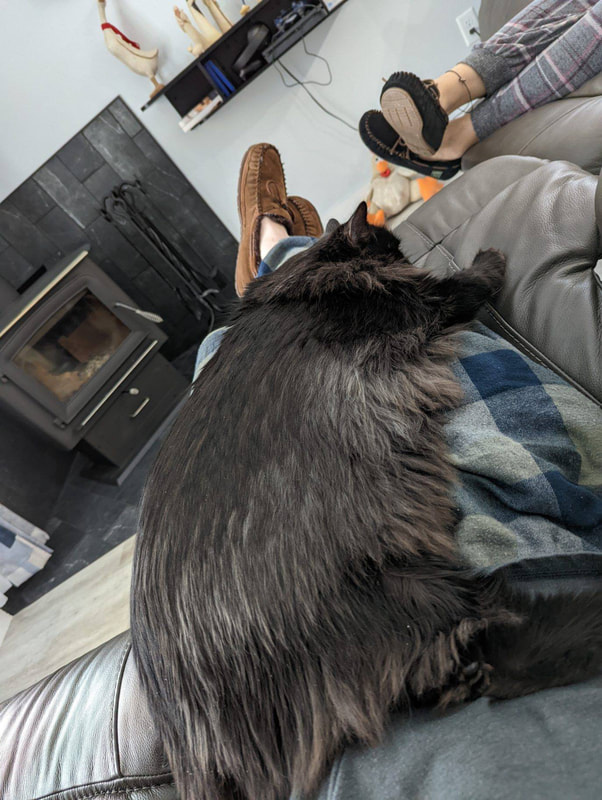 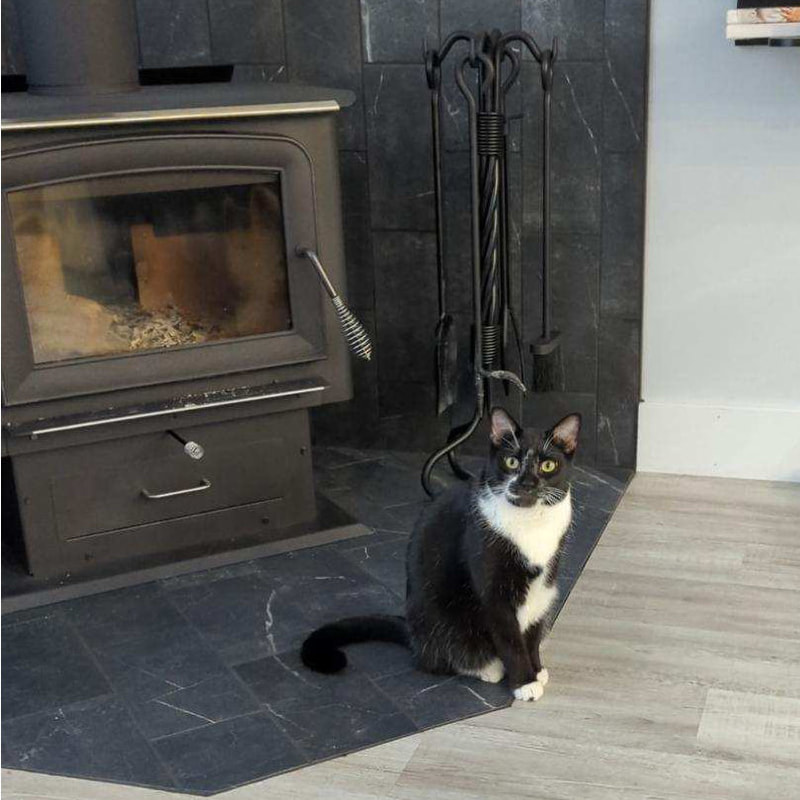 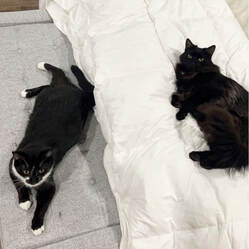 Toby and Patrick were surrendered to the Shelter in May 2021.
Long-haired Toby was a matted mess and needed a "lion cut" to be liberated from his smelly felted coat. Upon arrival he growled and pretended to be fierce, so that it took a couple of days until we found out that he was in fact a big marshmallow and mama's boy.
Patrick, his tuxedo friend, was very scared and stayed in hiding for weeks. Once he hid so well within the Shelter that the volunteers looked for him for hours until he was found, buried in a pile of towels in a cupboard under a sink.
But as time went by these two boys became super confident and the mascots of the Shelter. Patrick overcame his anxiety and would be the first to greet a volunteer at the door. Toby was a love bug and quite a character.
And just at the time when they started to be bored with Shelter life, the right people showed up for them.

The boys went home on December 12, 2021 with Bryan and Melodee from Island Pond.
Their adoption counselor Nancy reported that Toby was out and about in his new home immediately, ate right away and played a little bit.  Patrick stayed in hiding for about 2 days. Then all of a sudden, Patrick decided things were o.k. and hopped up onto the couch with his new people! Patrick was a bit slow to eat and drink, but now both boys are eating and drinking like champs.
Bryan stated that the cats settled in well and were doing great. Some of their favorite toys are the laser pointer and ribbon wand toys. Toby and Patrick are both very affectionate with Bryan and Melodee. Toby sits on their laps daily and Patrick sleeps between them every night. Toby does sleep with them but tends to be in and out of bed all night and likes to settle down at the foot of the bed from time to time.
They all enjoy cuddling on the couch. There is a wonderful spiral staircase in the home and the kitties have mastered going up and down the staircase.  Toby especially likes to go up halfway to lie down and observe what's going on below. Patrick does love to sit on the kitchen counter, just like he used to do at the Shelter at feeding times, and that is "absolutely o.k." in his new home.
Overall, Bryan and Melodee are very happy with the boys, they love having lap cats and feel that they are doing great. 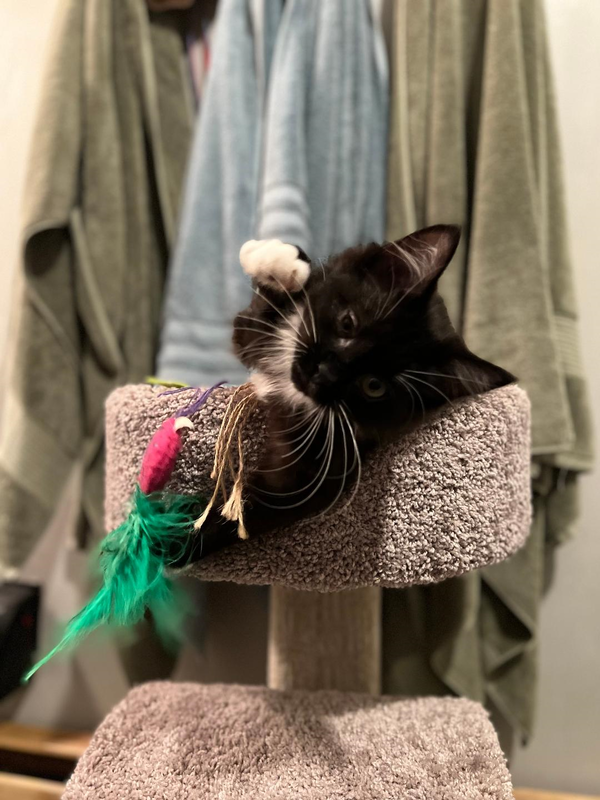 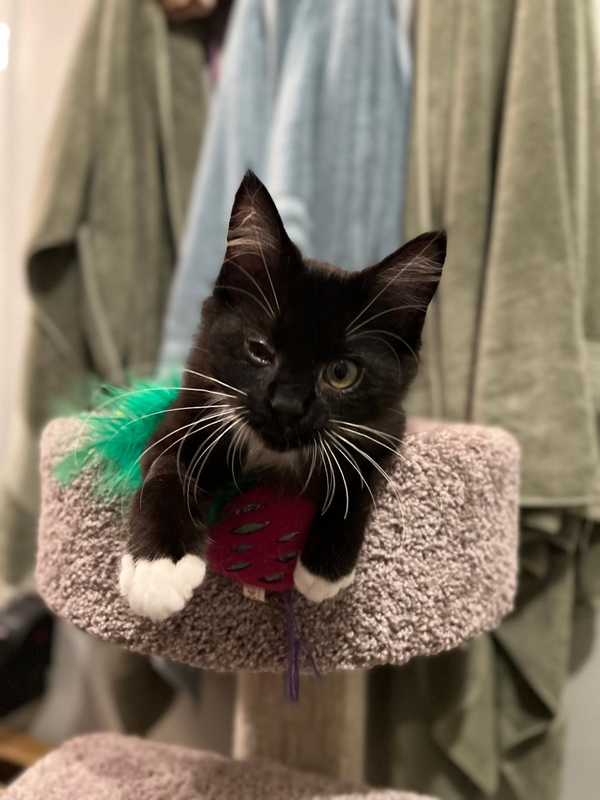 ​Wynken is a beautiful, long haired, black feline girl with a hint of tuxedo.  Her beginnings in life were rough and yet, through all that she endured, she kept her playful joy.  She had a damaged eye from a virus.  She suffered a different virus that almost killed her.
Our own vet tech, Andrea Chiesa, gave her special ICU care at the Shelter and Wynken survived.  So…of course…they were bonded for life, Wynken and Andrea.  And now…Wynken is a part of Andrea’s family.
​
From Andrea:
“Oohh she's been so much fun. It's been a while since I've had a kitten and she loves playing fetch. I find myself laughing out loud.  It's fun to hear her and the other resident cats playing and running and chasing each other.  When we play with the mouse, I always ask her if she's spying with her little eye.

Oohhh! I was walking through the living room and saw Wynken and Yeti sleeping side-by-side near the fire. I could cry!!!! Soooo haaapppyy.”

From this from Cyndy, her foster, on hearing that Andrea was adopting Wynken:

“Oh I’m crying! What a happy outcome for the littlest, half gone kitten I nearly missed in our woodshed. Andrea is wonderful and I’m sure Wynken is in for one amazing life!

I have no clue how long or how many times she was sick before we found her. So glad she can see and now it can be a sweet quirk.

Please hug and kiss her for us. I have her on my fridge and send so much love and positivity every time I see her picture.”