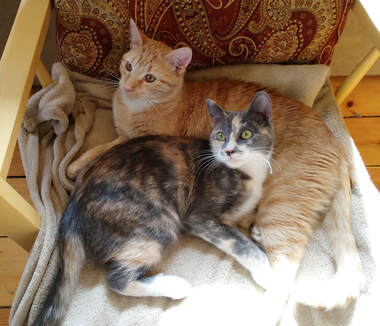 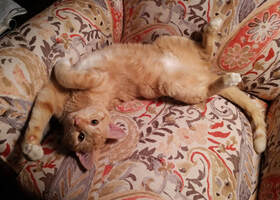 These two young siblings are not only beautiful but their life among humans has been very lucky.
They were raised and socialized so well by their previous owner that they grew up to be super friendly, happy and fearless kitties. Although they couldn't stay at their first home, they brought a quick beam of sunshine to the Shelter before they were adopted to another sweet home by Sharry in Canaan NH.

Sharry is an old hand with cats, and her house is an indoor-kitty heaven with plenty of interesting spaces to explore, windows to look out of, lofts and cat trees to climb up to, stairs and hallways to chase each other up and down, cozy chairs to claim... and all that shared with a lovely new human who speaks cat!

So, it was no surprise for us to see the first pictures of the two youngsters owning the house without hesitation, and to read Sharry's update shortly after Ivy and Oliver went home with her:
"The cats are settling in nicely, and it's been a great joy to watch their exploration. I'm pleased with how comfortable and relaxed they already seem to be." 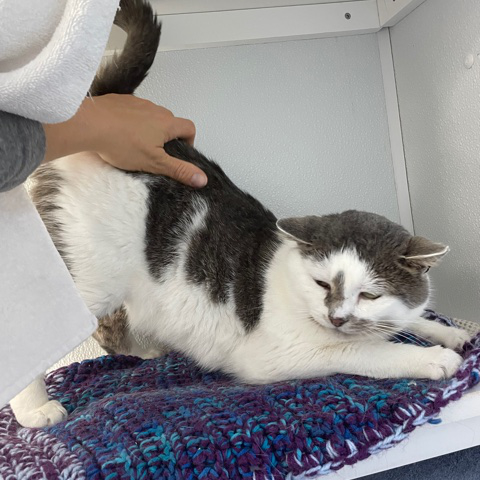 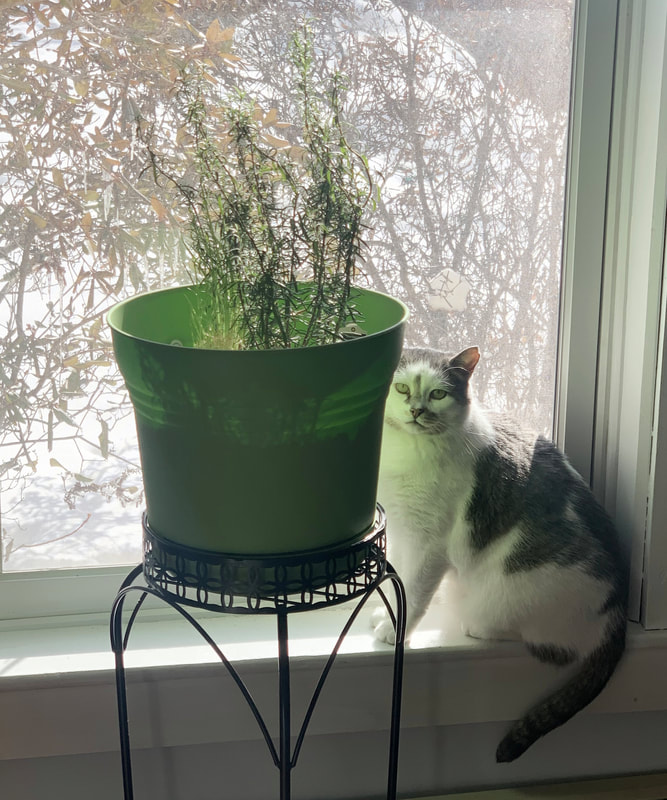 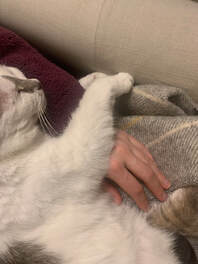 Now and then a cat comes along that has one of those faces and personalities that just tugs at your heart and makes you melt. Bobbie was one of those cats.
This 2-year-old kitty came to the Shelter from a farm in a neighboring town where the owners were concerned that he was harassing the resident cats.  But he turned out to be such a gentle, sweet, shy boy, that it was hard to imagine him harassing anyone or anything.  He appeared quite withdrawn at first, maybe a bit worrisome, crouched as he was….but the volunteers reached out to pet and caress him...and he responded with full-throated purrs and head butts. His body and soul just loved the human touch.

When Bobbie first went to his new home in Littleton, he was shy. His adopter quickly realized that he loved to be brushed and petted, so he got brushed and petted often, which helped him to settle in.
His new name Indy (after Indiana Jones) seemed to make him braver.

Initially Indy stayed in his safe room for ten days so that he wouldn't be overwhelmed in his new environment. Then he was let out and began to explore his home. He began talking to his person, feeling comfortable and getting more and more cuddly. Indy was a bit skittish at times when there was a different noise and he would run back to his safe room. But over time he became more adventurous.

Some of Indy's favorite toys are a ball with a bell in it and a cat nip toy.
His person says Indy is such a sweet boy and a cuddle bug. He is amazing and has a soft, sweet meow. Indy is well loved at home, is feeling more confident and is definitely warming up to his new life. He is fantastic and I'm really happy with him. 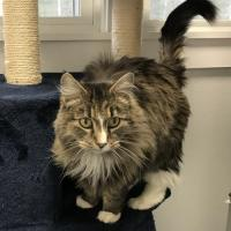 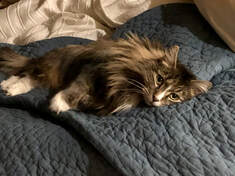 ​Sprout is a 7-year-old sweetheart with a nice portion of Maine Coon in her feathery coat. When her family situation became increasingly lively with new young humans and puppies Sprout started to retreat into the basement and to disappear on long outside walks looking for more peaceful places.
Finally, her concerned family decided to surrender Sprout to the Shelter to give her a chance for a better fitting home.

It didn't take long until Sprout caught the eye of her new person.
After she had spent only a couple of weeks at the Shelter, Brooke from East Burke took Sprout home to her family and to her spacious house, hoping that Sprout would keep her company while working from her home office.
Sprout appeared to be rather nervous and in need of a lot of quiet time after her previous home experience, and Brooke worked patiently with her new kitty to make her feel safe in her new environment.
Sprout happily took all the time she needed in her cozy hiding spots.

"I just wanted to give you a quick Sprout update.  Slowly but surely, she is becoming more comfortable.  She still spends a lot of time under the bed but now she stays at the edge rather than under the middle where you can’t reach her.  Each day she comes out a little more.  She sleeps on the bed at night instead of under the bed and she is spending more and more time on the bed during the day.
She is also starting to adventure a bit more during the day.  She has made appearances in the kitchen several evenings this week and even came down to the basement floor to watch my workout earlier this week.  She is still very nervous so that the slightest sound or movement of your hand can send her running but she is getting much better.  It used to be that if anyone tried to put their face anywhere near her, she would run.  Now, if I lay down next to her on the bed, I can put my face about 6 inches from her and she stays put.  She will also let me pick her up for a couple of seconds without panicking.  Steady progress but I think it is going to take a while…..  She is very sweet and we love her very much." 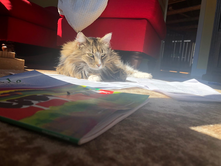 ​On April 5th Brooke wrote:
"Sprout is doing really well! She rarely goes under the bed anymore.  She sits with me in my office during the day and she sleeps in the bed every night.  She used to only sleep by our feet but now she will even come up and lay on my stomach.  She still startles easily and doesn’t allow you to get your face close to her or pick her up but I think she’s really making progress." 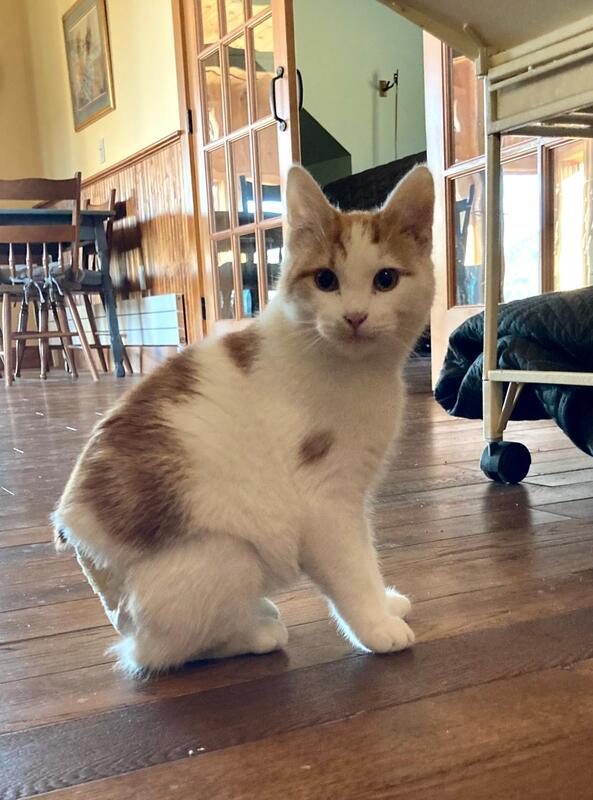 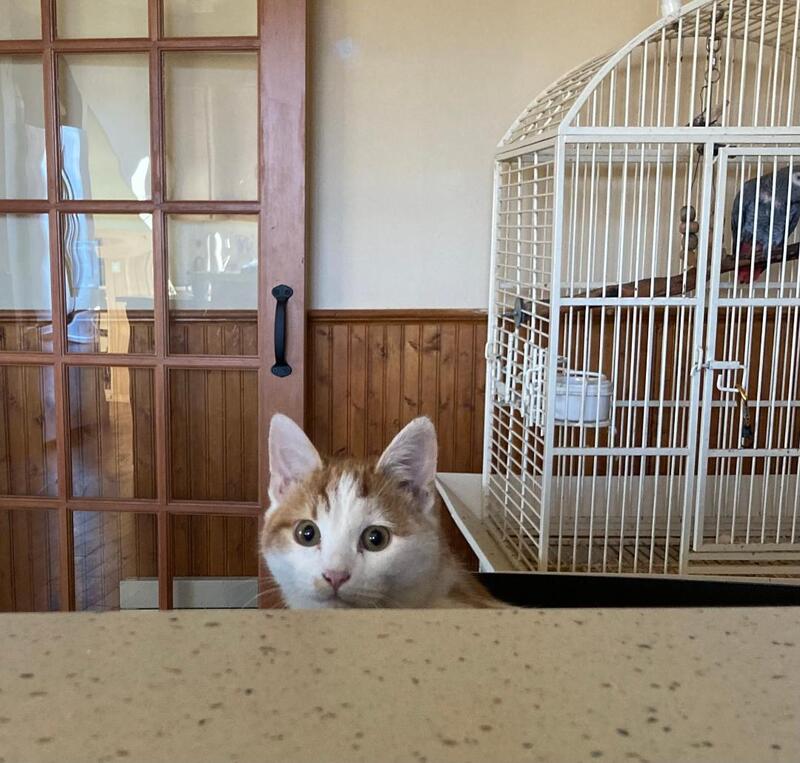 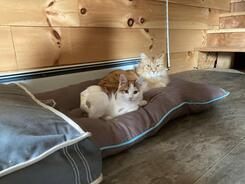 ​Peter
​
Many of you have been following Peter’s journey.  He is the kitten who has Manx Syndrome.  He was fostered by our advising vet, Dr. Sally and her spouse, Ric Prescott.  They succumbed to his irresistible charms and adopted him on Feb. 28.  Here is Dr. Sally’s recent update:

“It’s hard to believe Peter is now 5 months old, a little 5 pound wonder! His happy energy and zest for life is not slowed down at all by his body, he just bunny hops when speed is required and walks purposeful when feeling casual. He lives to eat and practice hunting skills, anything could be prey, currently lady bugs are a big hit!  Peter wears a newborn size diaper and the routine of the day has smoothed to 4-5 changes and, when he scampers away after a cleanup before the new diaper gets back on, ‘naked boy’ knows the joy of that freedom as well as any human toddler playing the game!
I guess it’s safe to say Ric and I didn’t see this family addition coming but we’re happy to have his joy and energy in our home!”​ 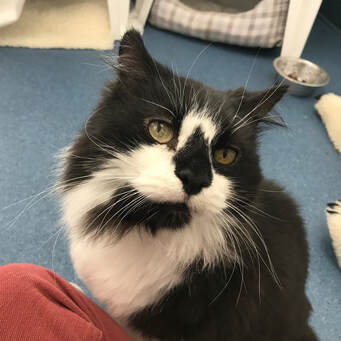 ​Dominic was found on the streets of St. Johnsbury in March of 2018.  He was very bedraggled, matted, and scared.  And as it turned out, he was also FIV+.  The shelter gave him plenty of sweet time and love and in August of 2018, he was adopted by one of our volunteers.  There he blossomed into a beautiful and loving boy, who wanted nothing more than to be petted and have his belly rubbed.  Sadly, Dominic was no longer able to stay in his adopted home and he came back to the Shelter in the Fall of 2021.  But about a month later, he went into foster care and fit in so well that his adoption by Helen M. was finalized on Feb. 28, 2022.  As it turned out, Dominic had an eye that needed to be removed this past March, and so, now, he is Dominic, the Pirate.  It hasn’t fazed him a bit.  He is still the same cuddly, purring boy, managing quite well with one eye! 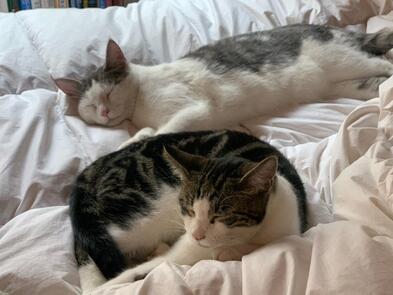 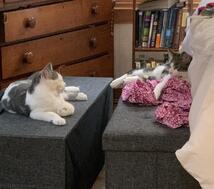 ​Hayley and Scott from Waitsfield had just begun to look for a bonded pair of cats after losing their beloved felines several years ago.  How very lucky Baloo and Aladdin were when Hayley and Scott saw them online and emailed to inquire.  With a stunning application, and references full of good words about their love of their pets from friends and vets, Hayley and Scott were approved to adopt the brothers, Aladdin and Baloo. These two boys are about as handsome as it gets…and are absolutely cuddly and loving.  Here is the update on the boys, who went home on March 31.
“Both boys are doing great! Both extremely active and playing constantly and both extremely affectionate, purring and cuddling all the time.  They are sleeping both with us and in their beds and not wanting me to type this without their help.  So sweet and we couldn't ask for anything better for the perfect kitties! We are thinking of renaming them if that's ok.  Maybe Tico for Baloo and maybe Ziggy for Aladdin. They are so much fun! Thank you again for giving us these beautiful animals! Hayley and Scott"