In early January, we received word of a home that had been foreclosed on, with the owner then leaving without letting anyone know of the many cats that were still there.
​
Our trapper, Nancy Pellegrino, spent several months working to bring the cats to safety.  It was an unbelievable labor of love on her part.  The ten cats are now in our care.  At the beginning they were all deemed “feral”.  But now, three months later, they are making wonderful progress.  Many are ready for adoption, to the perfect, cat savvy home.  Here are some photos and updates.  They will go in pairs, because that is how they will be the most comfortable.
As some of you know, there is nothing like the feeling of bringing a feral or semi-feral cat to the place where they finally feel safe and loved and even begin to trust and love back. 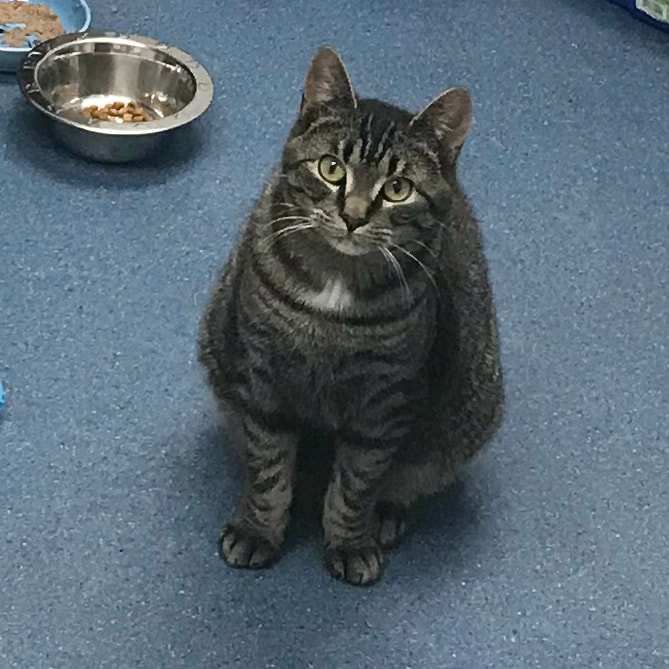 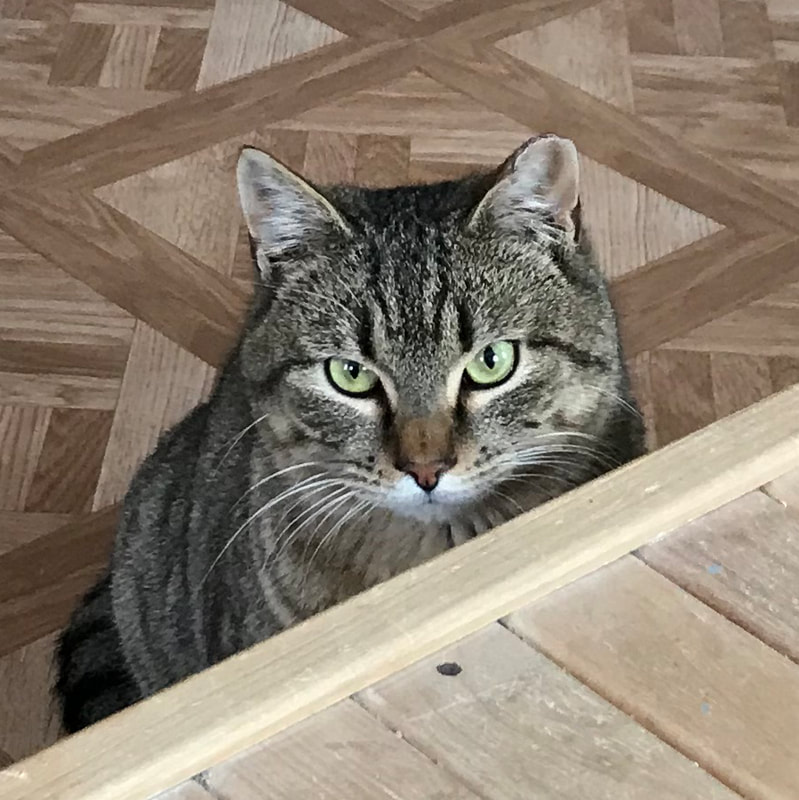 Austen and Vincent are two brothers, we believe.  They are so very handsome.  They are living in foster with Nancy Pellegrino and have made themselves at home with her other cats.  Vincent has turned into a total love, constantly crying for petting.  Austen is still a bit wary…but cries to Nancy for his food and no longer runs away. 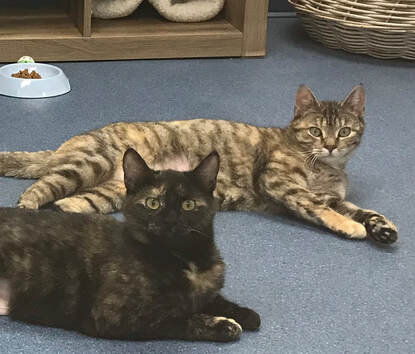 ​Katsura and Mama Bear
In the Shelter

Julia Persch wrote about the girls:
"I sat in the girls' room for an hour, working on my laptop and flirting with the cats once in a while. They came fairly close, were relaxed and blinky-eyed. Katsura lay near my chair and Mama Bear on a tree platform right above me. Half an hour in I fed them wet food. Both cats ate on the floor: Katsura at arms length with my hand holding the rim of her bowl. Mama Bear ate three feet away.

Afterwards Katsura was very flirtatious. She sniffed my hand when I held it out, rolled on the floor in front of me and rubbed against the computer table. I placed my hand there on the table leg, and Katsura rubbed her body along my hand a couple of times.
Once she wacked my hand without claws when I held it out to her.

They both love company. Katsura is more actively engaged. Mama Bear looks very content when she feels safe and close by, enjoying company in a quiet way."
​Pixie and Audrey
In the Shelter

Pixie and Audrey are at the shelter in their own colony room.  They are still a work in progress, but are coming along.  They used to hide in their hiding boxes whenever we entered the room.  But now they stay out, enjoy their meals, and even are beginning to give us slow blinks.  Soon, very soon, they will take the leap of faith and maybe play and even eat out of a volunteer’s hand. 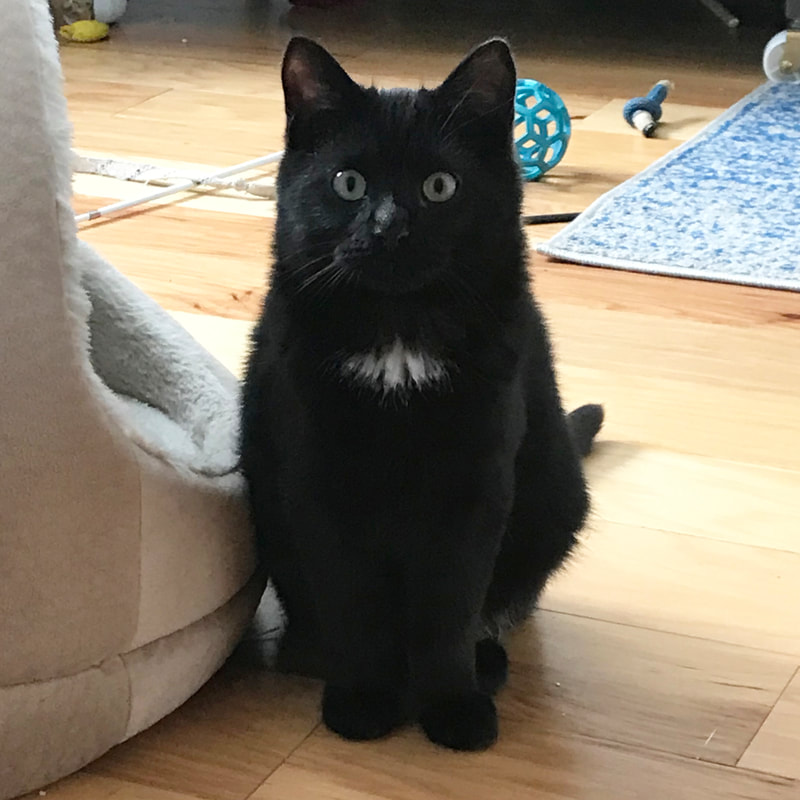 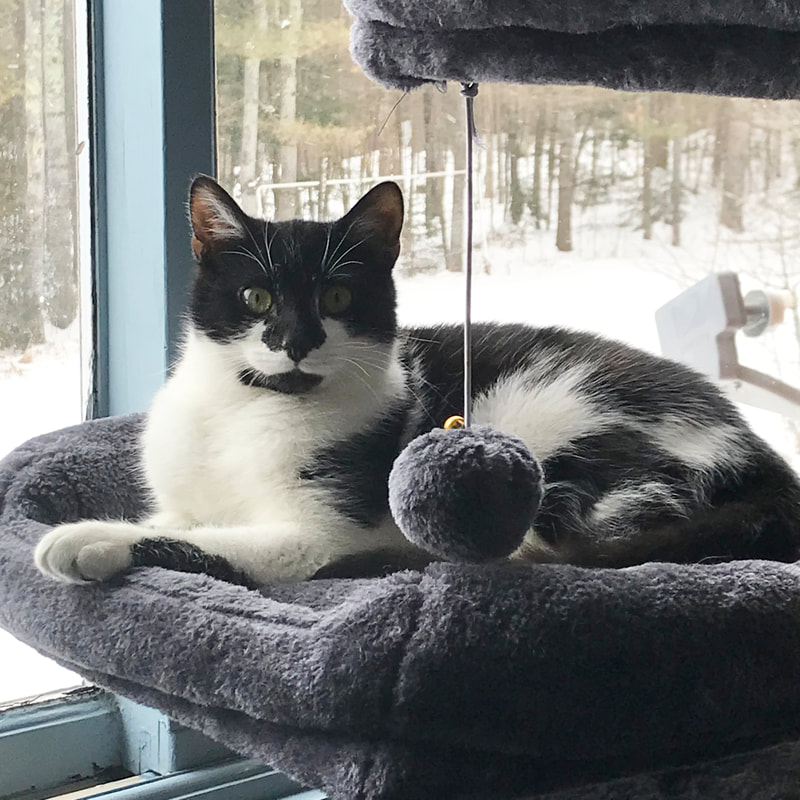 Chauncy and Beauregard
Fostered with Alicia Clarke and family
​
From their foster family:
"March 22:
I wanted to fill you in on the kitten's progress after a little over a month.  They have grown in many ways.
Chauncey is a little love bug.  He greets us with head butts and rubs and wants to be petted and scratched under his chin.  He is especially affectionate at 6:00 am.  That might have to do with food.  He plays on his own and with Beau.  He can be rough but he also can be very sweet.  He likes to lick arms, legs, feet and hands.  He will crawl under the blankets at night and lick almost like he is nursing.  Sometimes this is followed by a bite!  He chirps a lot when playing and he cries when he sees his bowls of food before we set them down. He still loves to eat but he doesn't steal Beau's food and the hissing and growling around food has completely stopped. He uses the box appropriately and his poop is firm.

Beau shows his trust and affection by sleeping part of the night on my legs and sitting on the bed when we are in the room with them..  He too will run to greet us.  We haven't yet pet him and he is still shy of hands but he watches Chauncey with his squirmy rubs and hugs with people.  We think it is only a matter of time before he will enjoy a petting.  He eats much slower than Chauncey, savoring every bite.  He loves to play with string, wands and little mice.  We have to watch that he doesn't eat those mice.  I have removed all the ones with fur and tails that can be bitten off.  He also loves to chew wool blankets and socks.  He had a lovely felted cave in his room that we had to remove because he was eating around the outside.  When he plays with toys he plays rough!  It's as if he is truly hunting.  When he plays with Chauncey he is much gentler.  He still likes to chirp and bite his neck, but Chauncey just lies there.

During the day we give them more space by setting up the gates to allow three rooms to be open so they can run. They like this. Especially when they can hang from the bathroom curtain!  When the other cats are by the gate the kittens don't seem at all flustered; no fat tails, hissing or growling.  Rosie will sit by the gate with them on the other side and growl but Budbill and Rooster just watch when they chase after each other on the other side.  We have not let all five cats be together and I'm not sure we will.
So, there is the latest on those two cuties!  I'm not sure what your plan is for the future; where they need to be developmentally to consider a forever home, but they are certainly going to make someone good pets and great companions with lots of laughs and affection!

April 1:  I think they are both ready for a permanent home. I left Beau at 2:30 this morning snuggling close to me in bed. Still doesn’t like touch but he sure likes to be close. Chauncey is a little love who delivers kisses, hugs and sometime even purrs. I fear they are getting so comfortable with us that it may take a big adjustment when they are adopted. You would know best how that works. Anyway, they have come along way and I’m sure will still get even closer to people."
​Dottie and Dash
Fostered with the Tucker Family

From their foster family:
​"They're doing so well here! They're very social with humans and cats alike. Following us around with curiosity about everything we do. They enjoy being pet, but not being picked up. They do have a habit of chewing up things and we're working on that. Cat toys, a scratch pad, one rubber cat food can lid, a USB charger cord and an ear buds cord have been sacrificed so far. We're also working on keeping them off the table as we sit down to eat and they want to steal food from our plates. Hopefully this will all improve with training. But at least it shows progress from a month ago when they would hiss and hide from any human presence."