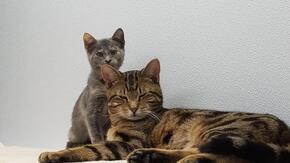 Nessie and Miley
​--Helen Morrison, Board of Directors President

This November newsletter is devoted to friends.  After all, friends are who share the sunny times with us; friends are who help us through the hard times.
If we are lucky enough, each of us can point to a few people in our lives who are very close friends.  We really don’t need a lot of friends….just those few whom we can count on, who are there for us, no matter what.  That is not to say that those friends aren’t honest with us when they are worried about us, when they think that maybe we need a loving-yet-direct talking to.  But there is also that unconditional love.  They love us for who we are.  They don’t use personal stuff that they know about us against us.  They can be trusted to keep confidence.  And they can appear when we least expect it...a precious gift in our lives...in the good times, and in the trying times.

It is so interesting to think about friendship among us humans.  And it is interesting to think about friendships between humans and animals.  And it is interesting to think about friendship between animals...sometimes of different species, sometimes within the same species.
We often get cats or kittens in pairs that are friends, that are bonded, and we are asked to adopt them out together.  And when we have kittens, we are finding that the emotional and social health of the kittens is best when we adopt them out in pairs, as siblings.  But one of the nicest things that happens is when two cats come to the shelter who are strangers at first...but become best friends.  Some months ago we got a young kitten (Nessie) and an older cat (Miley) surrendered to us.  They were separate at first.  We let them out together...and they seemed quite drawn to each other.  And then, we decided to take the first chance.  We put them in a colony room together...and low and behold, they became fast friends.  They were both quite attractive to adoption applicants, separately.  But we decided to hold steady and have them be adopted together.  And they were adopted together...and they are absolutely as happy as can be...solid, close, secure...with each other and with their new humans.  It was absolutely the right decision. 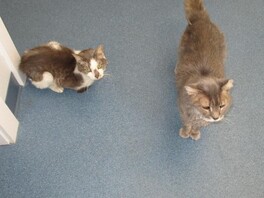 At the moment, we have two old kitty codgers at the Shelter, both with some serious health challenges.  There is some sort of understanding between them that they are sharing in this journey to health, that the special care and attention given to one is strengthening the other.  Their names are Earl and Finnegan.  You may remember Earl from the October newsletter.  Earl is over 15 years old and came to us at 4 pounds 11 ounces.  He now weighs 6 pounds, 9 ounces.  Finnegan is about 11 years old.  He was given up because he began misbehaving.  Finnegan and Earl share many of the same challenges:  hyperthyroid, irritable bowel, having to take a lot of meds, having to eat special foods that they kind of soldier through, together.  In fact, they seem to encourage each other by trying their own food and then trading places to try the other’s food.  They let each other know if one has overstepped by using a gentle paw thwap.  They seem to forgive quickly.  They encourage each other by example to eat well. They are there for each other in the good times; they are there for each other when things are a bit trying.
​
They are both in our med suite, a kind of ICU for kitties. They get special one human-on-two kitty attention by our Board member, Deb.  And they are gaining slowly, in weight, in health, in confidence, and in friendship.

So, that’s what it is all about...those interactions that bolster us up, help us through the hard times, love us for who we are.  Nothing is more valuable and precious.