Some things are simply pure joy.
A delicious dinner made by friends, for friends...exquisite tastes, fascinating textures, ambiance, faces we love in candlelight.
The often-taken-for-granted beautiful sunrise...the pure joy of that first flash of light coming up over the hill.
Three five week old kittens, new to the world, safe, full of wonder.  A sweet tiny kitten, discovering the delight of a blissful nap.
Pure joy.  Unencumbered gifts.
​ 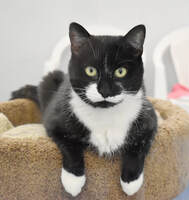 Some joys, though, come from working through challenges.. something you never thought would work out well... becomes jaw-droppingly wonderful.
I would like to tell you of two such joyful challenges.

Some of you may remember reading about a beautiful tuxedo cat named Stash.  He came to us as “a bit unpredictable”.  In truth, he was a pretty aggressive cat,  both to other cats and to our volunteers.  We were at our wits’ end.  And then Pam Parkinson came into our Shelter life and Stash’s life.  And Stash’s world slowly opened up so that he could be his very best self. 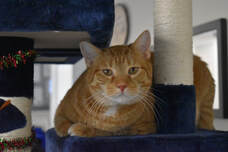 We also had a gorgeous orange cat named Alfie.  He, too, has been in our newsletter before.
He was at the shelter for a very long time...because he had some issues that put people off.  But we discovered that he loved kittens.  And we asked the Moore’s if they would foster Alfie for a while.  Love and trust grew; Alfie got his very own kittens.  And the rest is a joyous saga.

Stash and Alfie’s stories follow.  They show the joy and hope of challenges met, beyond expectations.  They are the kinds of stories that are part of what makes this Shelter “business” so utterly rewarding and joyous.
​ 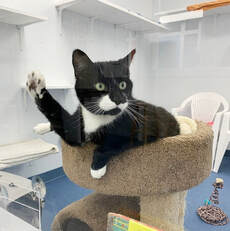 April 19
Hi Helen,
I hope all is well with you and everyone at the shelter.  I wanted to share some exciting news with you!  Stash is now out and about loose with my other 4 kitties. They are doing very well, and I have even weaned him off his fluoxetine.  I am so proud of him!
Take care,
Pam 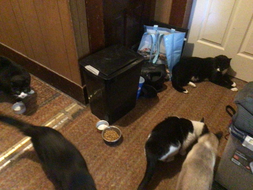 April 24
As many of you recall, Stash came to the shelter with some challenges.  He ended up fostering with me and my family, and adjusted so well with us that we adopted him.  Happy ending right?  But his journey did not end there.  When I adopted him, he was living in his own room, separate from the rest of the family.  We set him up so he had a whole bedroom of his own, with an exercise pen extending into the hallway to allow him to see everyone without being able to attack them.  Slowly over time, I saw Stash spending more time in his fenced-in area.  My young female Felina started spending a lot of time sitting by him outside of his fence.  At first he would reach through and swat at her, but eventually they could be seen laying together, one on each side of the fence.  Felina then started trying to run into his room with me at feeding times.  She was so insistent that I gave up trying to stop her.  After countless sessions this way, I started to let her in to visit freely for short periods of time.  Then the day came when one of the dogs pushed Stashes fence open and I found him laying with his new friend in the hallway.  When he saw me he jumped up and greeted me, clearly very proud of himself.  He allows me to pick him up, he lounges with the other kitties, and he loves life again.  His transformation was amazing to observe.  Stash is a new cat, all he needed was love and time to find himself. 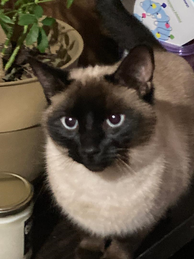 April 25
Here is a picture of his sister who just would not give up on him.  She came from a shelter in Canada.  One of a litter of four born to a semi feral black domestic short hair!

May 2
Stash follows all of us around the house, demands attention, and “helps” get things out of the fridge! Lol.  I can carry him all around now no problems at all.  He actually got over with the dogs today, and instead of getting mean jumped up and sat beside my husband.  I was able to pick him up and carry him to dogless territory.  He is doing so well,
Pam 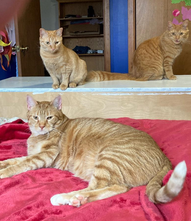 Alfie’s Story
-Ellen Moore
Alfie has gone from a cat that does not show very well and seems to have grumpy cat syndrome to our cuddliest animal.  He very much likes to butt your head snuggle up to your neck and then ride around on your shoulder. Also he does not like closed doors. At all. He likes to be where we are. Although he also loves to be with his girls. The two kittens we got ... well he believes are his and he’s been raising them very well.
They are now old enough to be considered cats but he still snuggles some like they are his babies.
He’s incredibly healthy and seems to be enjoying everything.
Although he really does want to go outside and catch one of our chickens.