In January of 2019, KAS received a call from a resident on Cherry St. in St. Johnsbury of a cat living under her porch. The caller believed the cat was pregnant because she looked like a little black bowling ball.
One of our volunteers was able to trap her and take her home until she could get her to the vet. The cat was terrified of being handled and put up a big scary fight in trying to get her in a carrier. The volunteer was bitten badly, so that the cat had to stay in quarantine for 10 days to be observed for rabies.
She was, in fact, at the vet for almost a month for several health concerns.  She did not have rabies and she wasn’t pregnant. She was named Julianna. 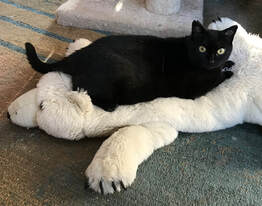 When Julianna came to the Shelter a month later, she was a tense bundle of fear and resentment. She was quite difficult to tend to, with lots of hissing and lunging. She frightened some of the volunteers. There were hints of ways to reach her, though. She liked to play with the toys in her condo. And she loooved food.
But still, Julianna did not seem to be making any progress toward being an adoptable companion pet.  And so, 6 months later, in August of 2019, it was decided that a barn cat situation might be the best placement for her. Until such a place could be found, volunteer Helen took Julianna home to her garage as a foster cat. She had a lovely condo in the garage, with a cozy cave on a warming pad. She had access to an outside catio where she could sniff the grass and watch the birds.

Fall and winter came, and nobody had shown interest in adopting Julianna for their barn. But she seemed to relax in her garage home, keeping warm in her little hut or exploring the space. Every single meal was a feast to her. While she was eating, she was oblivious to anything but her food and began to allow a little petting, but only then.
Caring for a very shy or feral cat and seeing her become content and somewhat friendly is irresistible to a cat-lover and inevitably leads to foster-failure. Helen decided to adopt Julianna in October 2020 to keep her as her “garage-cat”.

But Julianna had other ambitions. Being adopted seemed to change her mind profoundly. As temperatures began to fall, it became obvious that she wanted to be an indoor cat. She had shown signs of arthritis in her legs, and she would wait at the door to come inside.
And so she did. She started out in a cat condo in Helen’s office in November 2020. She had to share the room with cat Ali, another “unadoptable” cat who didn’t like other kitties, so the two of them had to take turns in roaming free in the room.
One day while Helen worked at her computer, she felt a tickle on her feet: Julianna was licking her toes affectionately. Another time, while Helen took a nap on her recliner, Julianna hopped on her lap and joined her for the first of many naps they have since taken together. Hands were still off-limits, but Julianna could trust that she wouldn’t be touched. She loved being played with, using a wand toy with a squeaky mouse. She would look lovingly at her lap person and at her playmate.
The idea dawned to try introductions to the other feline housemates and to find out if Julianna could be part of the living room society. No surprise that she did a bit of hissing and letting the other cats know that she was not to be messed with. Over the course of a few weeks, the residents slowly accepted her presence and her boundaries.

Julianna didn’t become close friends with anyone until Dominique arrived, a big fluffy one-eyed cat, who was once deemed unadoptable, as well. She completely fell in love with him, and pursued him with a steady, loyal, and adoring passion, even though he didn’t quite return her affections but rather tolerated her. However, when she recently sprained her paw and was in obvious pain, Dominique stayed close to her and even showed concern. 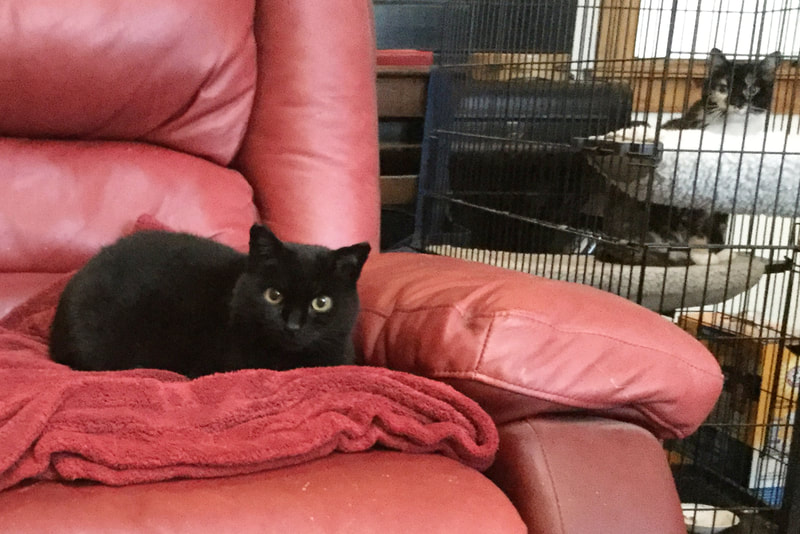 Since Julianna has become part of the house family, she seems to be in constant bliss. Her body language shows contentment all day long: with the twinkle in her eyes, the smile on her cat face, the slow whips of the tip of her tail. She flops right where she could be stepped on with total trust. And she loves to rub her face on the hats and gloves and sweaters of her humans, proclaiming her ownership.

In a way she is more affectionate than some pettable cats that we have known. And we have no doubt that eventually she will let us pet her, maybe in a year or so.
Patience….that has been the key for Julianna and her humans.  And how it has paid off!!