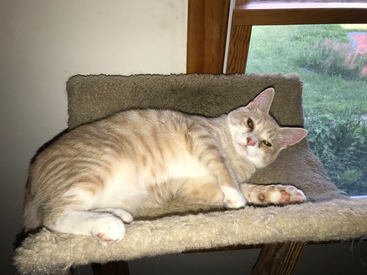 Little Maddy became the latest addition to a three-some of sweet and spicy ginger cats that were adopted by KAS volunteers Caleb and Nikki from St. Johnsbury in the past two years.
Maddy is super friendly and takes advantage of a rich choice of playmates. Besides his two humans, he loves his new feline friends Goose, Sadie and Pooch, his rabbit pal Sweat Pea and his dog buddy Booger. 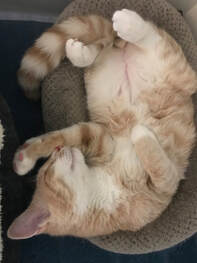 ​Caleb sent an update on all his feline adoptees on August 8th:

Maddy (a.k.a Stinky Baby or Mister Friend) has blossomed into an extremely playful, mischievous and sweet part of the family.  He spends most of his time playing with all of the other cats, the dog and the rabbit.  He still carries his favorite toys around in his mouth like he did at the shelter.

His behavior is very similar to Goose in that he has two modes (play/eat and cuddle).  When he is in play/eat mode, he will wander the house playing with any of the other pets and trying to get at any people-food if we are eating.  We are in the process of training him to understand he will not get people food.  It took us a while to get to that point with Goose and it is going to take a while with Stinky Baby too.  He does not want people-attention while he is in play/eat mode.
Then there is cuddle mode which is normally in the morning or at night.  He likes to scent-mark then press his body against our faces.  Then he will cuddle for a little bit and we know exactly when he is done because the next phase is the one where he attacks our feet!  He does this by jumping like a flying squirrel and landing on our feet with all for claws then grabbing, kicking and biting (not too hard). 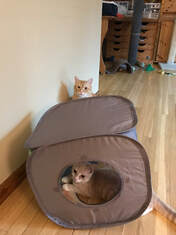 Goose and Maddy
​Goose (a.k.a Mr. Goobasgoo) was difficult to integrate into our family at first, but we got through it and are so glad we did.  He is very athletic and can be too much for our other cats when he wants to play.  At first this was a constant issue, but as time passed, he has calmed down.  He does still have occasional tiffs with Pooch (our older cat) or Sadie, but they are few and far between.  Pooch plays with him every morning after breakfast.
Just like Maddy, Goose has a play/eat mode where he wants attention from the other pets and will try to scavenge for food then has a cuddle mode when he wants people-attention. 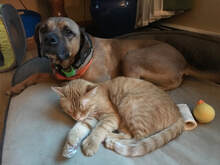 Most of the time he can be found cuddling with Booger on the dog bed or waiting attentively in the kitchen even though it is not time for him to be fed.  We also let the cats down into the basement occasionally which he loves and if you make the slightest move in the direction of the basement, he runs over to the basement door and asks to be let down.  He seems to understand how door handles work and fortunately his paws are just too small to fit around the basement door handle (he does try). ​ 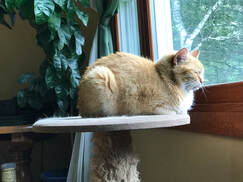 Sadie (a.k.a Little Baby Feen) is a hard-working girl.  There are numerous cat towers around the house, and she cycles through them all day patrolling the outdoors for security threats or prey.  She takes it very seriously and will give angry looks if she is interrupted.  She is also a master moth hunter and will talk to moths if they get in the house and are on the ceiling out of her reach.
She is very sweet at times and will cuddle.  She has never been interested in spending time in the bedroom but will cuddle on laps in the living room.
Sadie doesn't care for attention from the other pets but tolerates them fine and she does still LOVE laser toys.  The other cats have learned to get out of her way when it is laser pointer time. 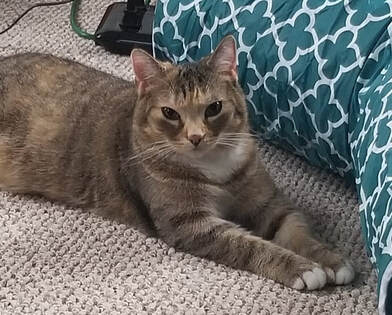 Eliza came to KAS in February 2021 as a raggedy stray with itchy scabs and patchy fur due to a flea allergy and a secondary fungal skin infection. She felt quite miserable and was also scared by other felines in the Shelter. But within her 5 month residency she blossomed from a cinderella kitty into a princess beauty. She even learned to trust other cats and made some polite acquaintances.
Eliza was adopted by Jill and Ben from New Hampshire, and went home on July 18th. 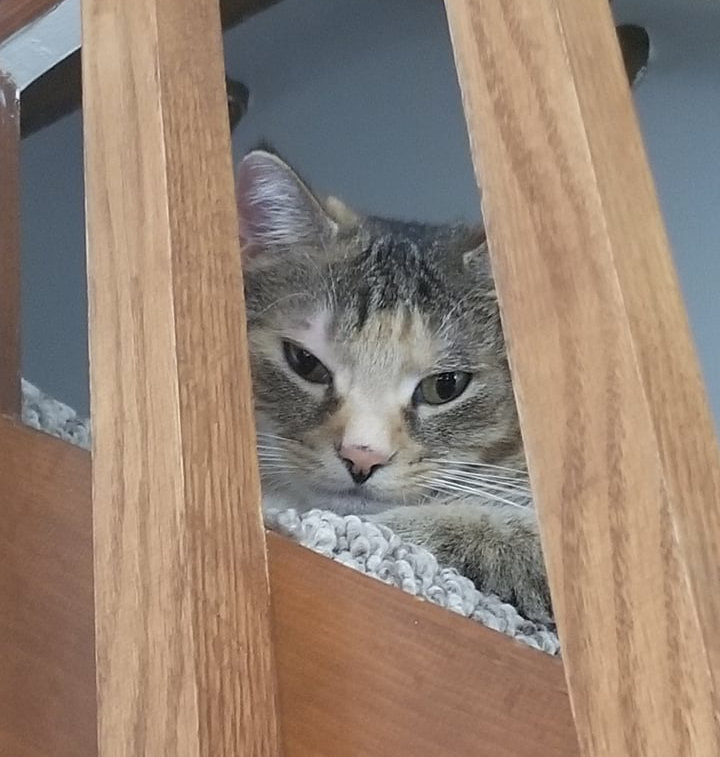 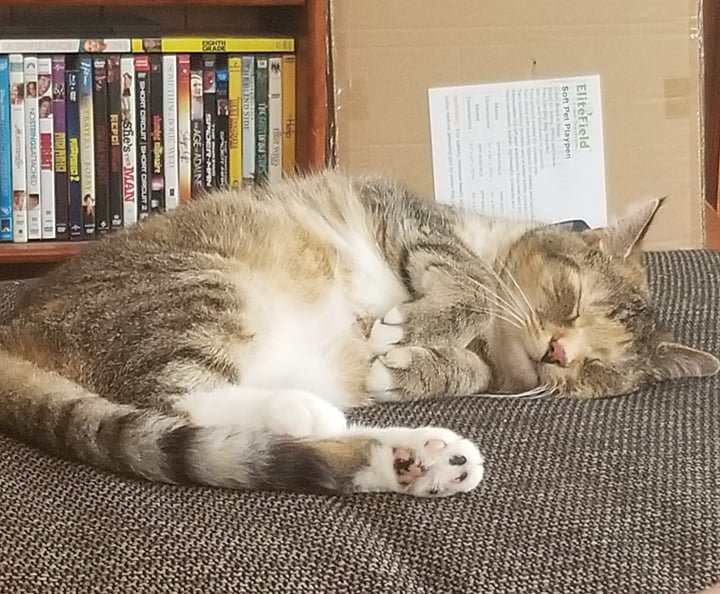 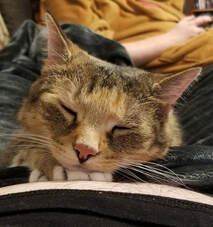 Jill and Ben were amazed with how fast Eliza settled in. As they got to know her and her feline habits, Jill was pleasantly surprised that they shared some of the same quirks! Eliza loves to hang out on the couch with them but also enjoys getting into some small, funny places in her new home.
Eliza can be a bit moody at times, just like a princess, and if she wants attention and her people are busy for a time, then she will turn her back to them and sit on the end of the couch and pout!
Jill says that Eliza's personality is really starting to shine through. She has the run of the whole house and gets the zoomies many times during the day. It's always super funny to see her sprinting from one side of the house to the other, and up and down the stairs!
She's also really enjoyed taking naps in her favorite scratch bowl that Helen and Julia gave them when they picked up Eliza at the Shelter. Jill says it's almost like that's her space to remember of the wonderful people who cared for her before she and Ben did. Eliza does get bored quickly so has a variety of toys and she switches them around frequently.
Eliza typically sleeps on the couch in the living room, but at times will cuddle up with Ben. She is eating well and particularly enjoys eating when she is in the company of her family.
Jill commented: "We are so happy, we LOVE her. Ben has fallen in love with her. We are lucky to have her and she is amazing. Eliza is super, super good and the sweetest thing ever. We could not have asked for a better cat."
Jethro and Freckles
​
When Jethro and Freckles were surrendered to the Shelter, we didn't know at first how to handle them. Big fluffy Jethro looked scary; he growled, hissed and lunged at everybody and put out intense energy.
Freckles the tabby seemed feral and paralyzed with fear; he hid in a cubby and never showed himself.
Little did we know that these two were in truth the sweetest marshmallows and cuddle bugs. They only needed some patient attention to come out of their shells and to show their true nature. 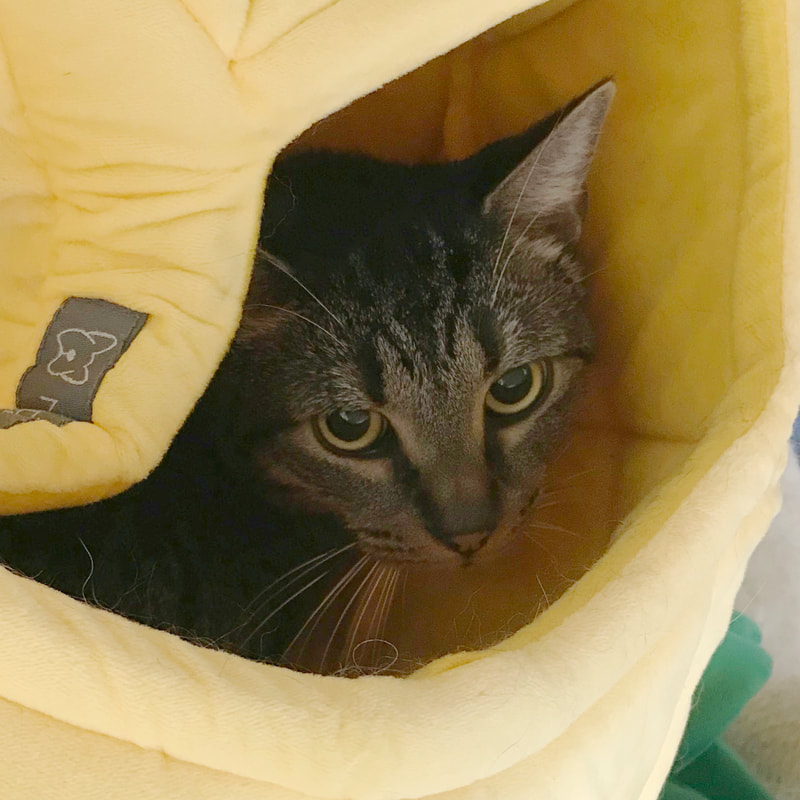 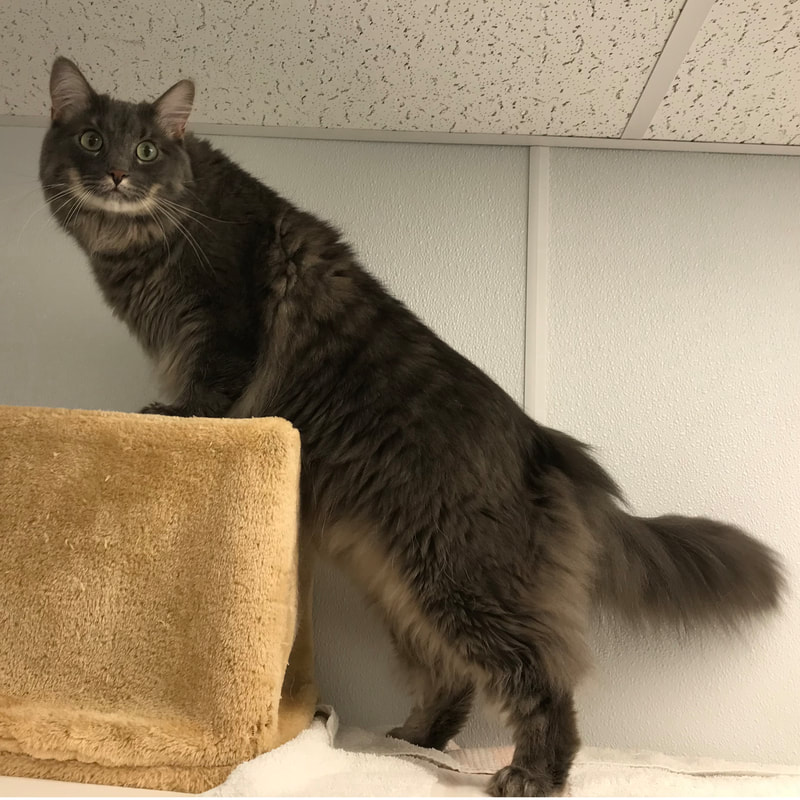 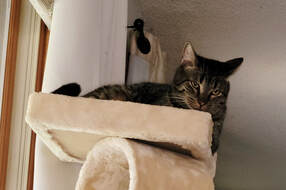 On July 10th Jethro and Freckles, now called Gibbs, became the newest family members of Mara and Rodney in Bethlehem, NH, and their young dog Mando.

July 12th " When they first arrived at home, they explored the space set aside for them, checking everything out.  Jethro did his hissing thing and we ignored it.  We spoke to both of them, and Gibbs allowed us to pat him. Later, they were both hiding in the same space, with Jethro in the forefront.  We talked to them. Then, we took turns visiting them.
The first night, we left the door closed and Gibbs found the cat door and explored the first floor.  After doing a full search because he was meowing, I found him behind the living room couch. I talked to him and then left him there.  Jethro was still downstairs under a chair, so I talked to him. He allowed me to brush him and then he went back to hiding. I left his food for him by his hiding spot.
This morning, I found evidence in the first-floor litter box so there was more exploring done. They are both downstairs, hiding, however Jethro is clearly curious and likes the visits.
It is slow going; however, they are eating and taking care of business.  Jethro has been rubbing me and the environment.  I suspect Gibbs is doing the same.  Both Rodney and I add play to our visits so we are hoping that we will become too much to ignore!
We know that this is going to take some time, but we are encouraged by their explorations on their terms and their increasing comfort levels with us by staying in the same hiding spot knowing we know where they are and taking care of them as best, we can during this building trust period.

July 16th "Jethro and Gibbs are out!  They venture throughout the house at night.  Gibbs was soaking up love today, making biscuits while Jethro played with the cat tunnel."

July 19th "The boys are enjoying keeping me company while I work!  Dog Mando is aware of them and steers clear.  He's curious and wary."
​ 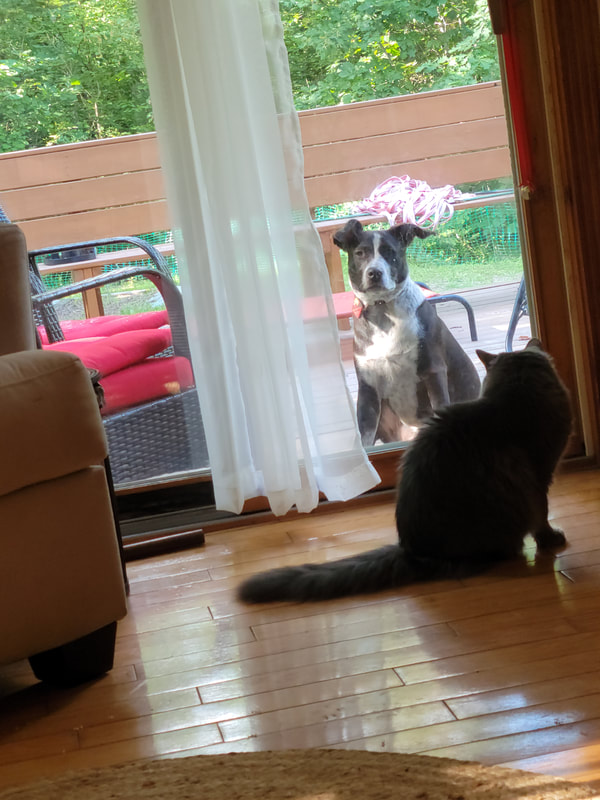 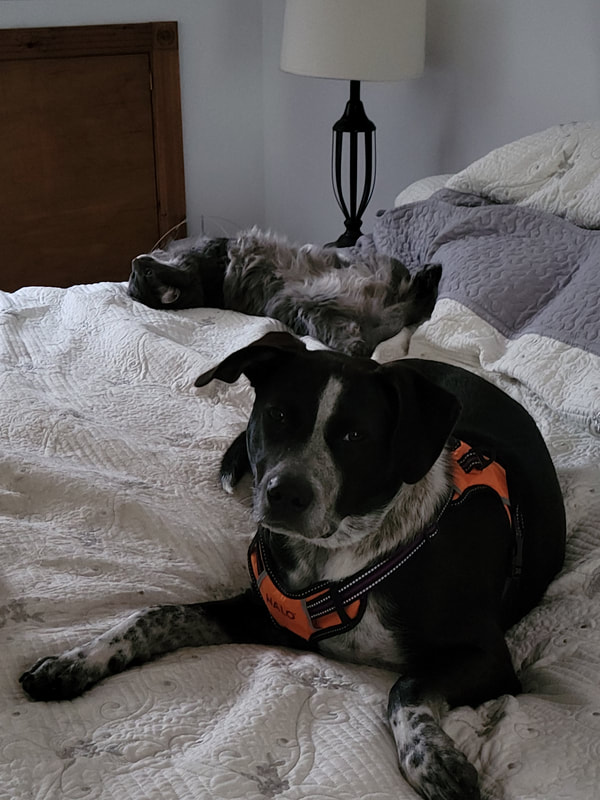 August 2nd "They are all out and about and part of the family. Jethro and Mando sleep in bed with me between them!  Gibbs and Mando hang out in the same room.  They are happy and funny.  Rodney likes when they visit him in his office!
Thanks for giving us this opportunity to include them in our family!" 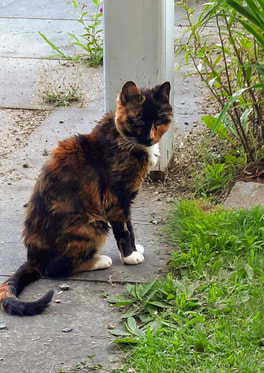 ​Oreo was surrendered to the Shelter in June at the age of 15.
Feeling harassed by a young child in her family she got so stressed and thin that her life-long guardian thought it best to let her go. She weighed less than 5lb at intake.
After a short time at the Shelter Oreo was diagnosed with a serious gut infection, which had probably been lingering for a while and was triggered by her dramatic life-change. One morning she was found lying in her room, nearly dead, covered in feces, and without the immediate medical attention of Dr.Melora Hunt, she would not have survived. But she was a feisty little cat with a strong will to live; she made it through.

Nina from Fairlee, VT, had her eyes on Oreo's posting on the KAS website.
A year ago, she had adopted two Main Coon mixes from the Shelter. These siblings were 14 years old at the time, quite scared and not particularly social. Nina said that it took some time and patience, but they became friendly and trusting pets. Sadly, Simba the male had passed away recently from cancer and his sister Lily was grieving and lonely for cat company.
Nina's passion is in geriatrics (in humans and cats). She only adopts cats who are 12 years or older and she has the kindness and skill to give senior cats a lovely home with the special care they need to be happy family members.
Oreo, now called Violet, went home with Nina and her husband on July 3rd. 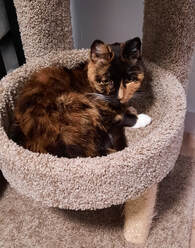 Nina wrote:
July 4th: "Violet has claimed the guest room bed. She is eating well and loves to play. Lily and she are still hissing at each other but otherwise ignore each other."

July 16th: "Violet loves flowers and grass, so gets a five-minute supervised visit to the flower garden every day. She follows me everywhere.
The girls scream at one another in the late morning hours and then retire to their separate floors. I think they hang out together in the early morning hours, but I cannot prove it yet."

July 23rd: "First trip to the local vet was this week: Violet weighs 5 1/2 pounds.  Her appetite waned briefly but has picked up again. She sure likes outdoor walks around the garden.

August 2nd: "Miss Violet loves her cat tree AND the catnip mouse that comes with it. She is gaining weight and loves to play in her water bowl."

Thank you, Nina, for giving Violet a new life and a sweet home! ❤️