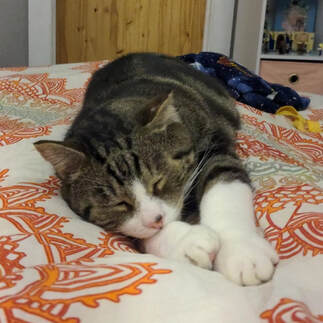 Miller has quite a history.  He came to KAS about two years ago, full of buckshot, thin, with an infected foot, and a mouth that was totally messed up.  The shelter spent lots of time and love getting Miller healthy.  And we were all so happy when Miller was adopted, about a year ago.  Miller bonded especially closely with an  elderly man.  But sadly, Miller’s human buddy passed away suddenly.  So, Miller returned to the Shelter.  We all wished so hard for a new special person to come along for Miller.  And our wish came true.  Sarah of Maine saw his photo and read his story and he was the kitty for her.  Miller now has Sarah to himself…and he loves it.  Sarah is away for the day, working at an aquarium.  But then she comes home to cuddle and squeeze Mr. Miller Cat.  And he couldn’t be happier.  Once unlucky, this boy is now twice lucky. ​ 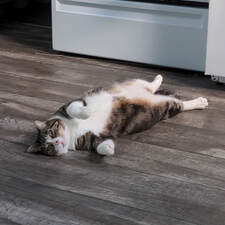 June 1, the day he was adopted.
“Miller and I made it home safe and sound, and he seems to be adjusting very well!

I made a little tent for him and put his red bed inside, but he immediately started exploring the apartment and rubbing his face on everything. I was sitting on the couch and he was being very chatty-- turns out he was hungry! I gave him 1/4 can of Fancy Feast and he ate every bit.

Then he led me to my bedroom and jumped up onto my bed. I laid down and he kept head-butting me to pet him! He started purring, and after a few minutes he laid down, rolled over, and started kneading biscuits :)

I'm so happy he feels so comfortable so quickly, it's only been an hour since we got home! Now he's snoozing up against me on the bed and purring.

Thank you so much again for everything, your boy finally has a home and I'm grateful I can be here for him. “
​
June 5: “Miller is doing great! He seems very happy and comfortable, we love to sit on the couch together and he sleeps with me every night. I got him a couple string toys and he loves them!”

June 24: “He's doing really well! He LOVES to play, we have several play sessions a day.” 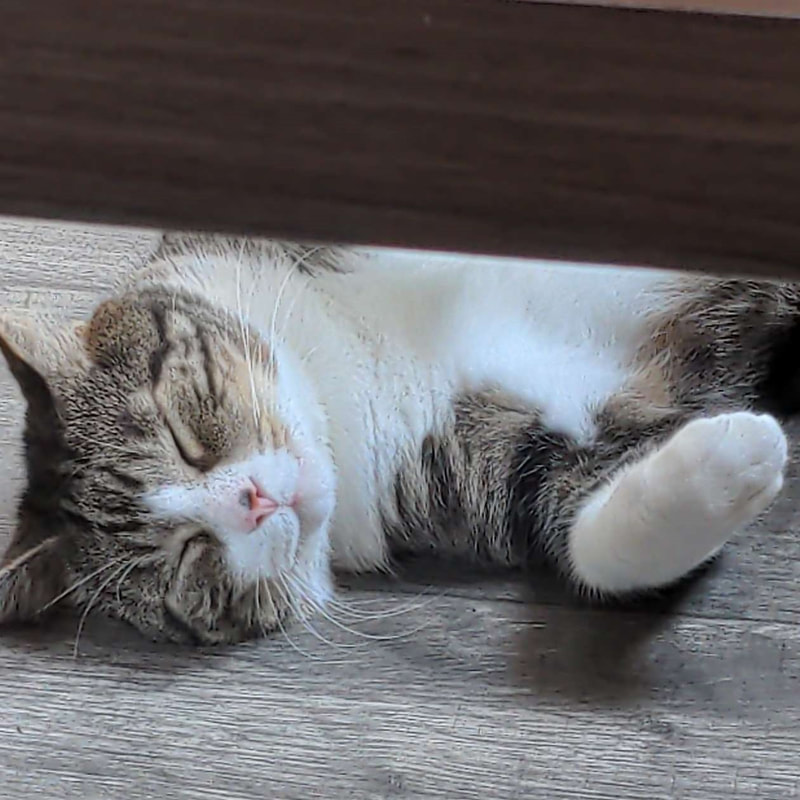 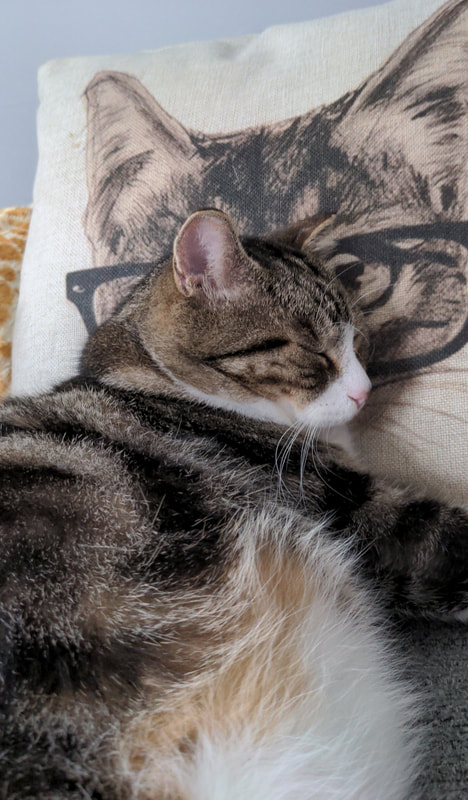 July 10: "Miller settled into my apartment and made it his own immediately upon bringing him home. He loves to cuddle, be brushed, and have a conversation with you! Perhaps most of all Miller loves play-time: I got him a couple toys on a string and he zooms across the whole apartment to chase it down and pounce on it! He will play at all hours of the day too. When I'm getting ready for work he meows for play-time, so I find myself simultaneously brushing my teeth and running around my apartment with a string at 5:00 am! Miller is such a wonderful companion, and I can't imagine life without him!" 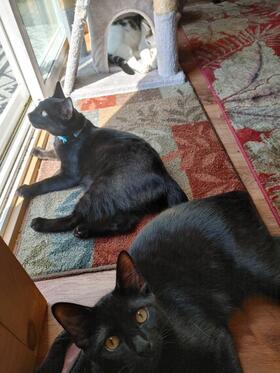 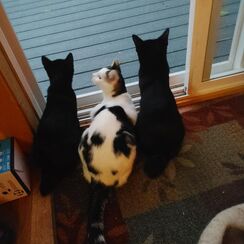 Jem and Dill are two beautiful black kittens from the Katarina clan.  Both have stubby tails.  They look so alike that their adopters, Dee and Den McDowell, had to put collars on them to tell them apart.
Dee and Den already have one Kingdom Animal Shelter kitty named Telly, short for Donatello.
Telly was adopted about a year ago with his brother, Domino.  Sadly, Domino passed away.  Telly definitely needed another kitty in his life.  He was very lonely for his brother.  So…Dee and Den decided to adopt Jem and Dill, who now go by the names of Jimmy and Dilly.
In almost no time, Telly’s lonely days were over and he was absolutely thrilled to have new friends. In fact, the three have a raucous and joyous time together.  And Telly and Dilly have become especially close. Telly’s lonely days are over…and everyone couldn’t be happier. 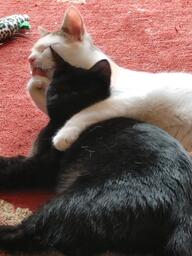 The following are from Dee:
June 29:  “Ohhhhhhh.....my goodness, what a life. Things are going really well and these boys are very, very busy. They run all over the house and play so well together now. We ended up putting a collar on Jimmy because we just couldn't tell them apart. Telly is just loving them both and they get along so well, not to say we don't miss our sweet Domino.
Thanks for checking in. I feel like I'm either vacuuming all the time or picking up after them. The house sure has livened up."
June 22: “All is good and everyone is doing really, really well. Telly is loving his new pals and they are very, very busy. They really make us laugh and when they slow down we get to cuddle them."
​June 16: “We are happy!!” 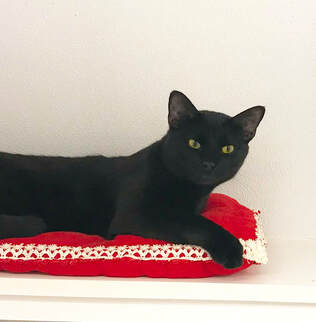 Thor is a wonderful, all black kitty.  He is part of a large family of extremely friendly, gorgeous black kitties, a few with tails, but most with stubby tails or no tails at all.  If you saw the June newsletter, this feline family was featured.  Katarina is the Queen, the matriarch.  And there are many wonderful offspring.  Thor is one of them.

Thor went home on June 17.  He was adopted by Bill and Monika, but in truth, it is their daughter, Tangeni, who has stolen Thor’s heart, and he, her heart.
Here is Tangeni’s update.

"Hi, my name is Tangeni, and I am the best friend of a wonderful cat named Thor! He is so fun to hang around with! He is kind, hilarious, and lovable! But, I'm not the only one who loves Thor, my family does too! My mom loves him because he makes her laugh, and my dad loves him because he gets a buddy to snuggle with!  My sister hasn't met him yet, but i sent her photos, and she loves him already! Thor is such a playful cat. He has a tunnel that he LOVES, and a fish on a stick that he can't stop playing with!​ 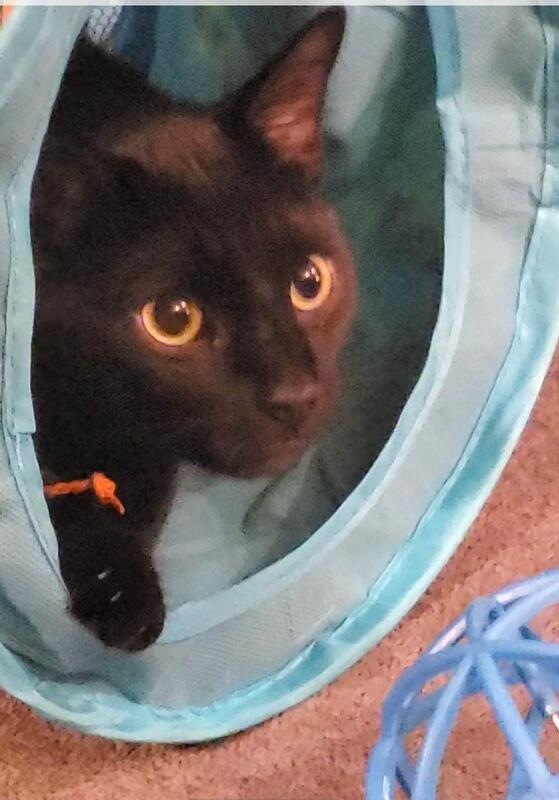 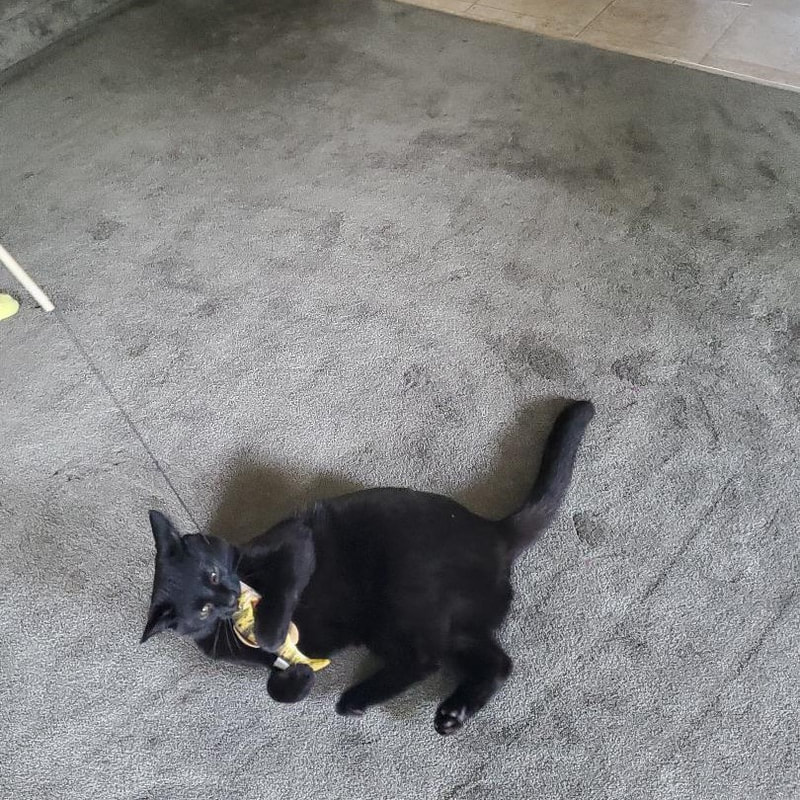 He's so entertaining! Thor loves to play with me, too! We run around the house together, and once we are tired, we snuggle! Thor always listens to what I have to say and follows me everywhere I go. He's my companion, and we trust each other. We have no regrets about adopting him and proudly accept Thor as one of our family members." 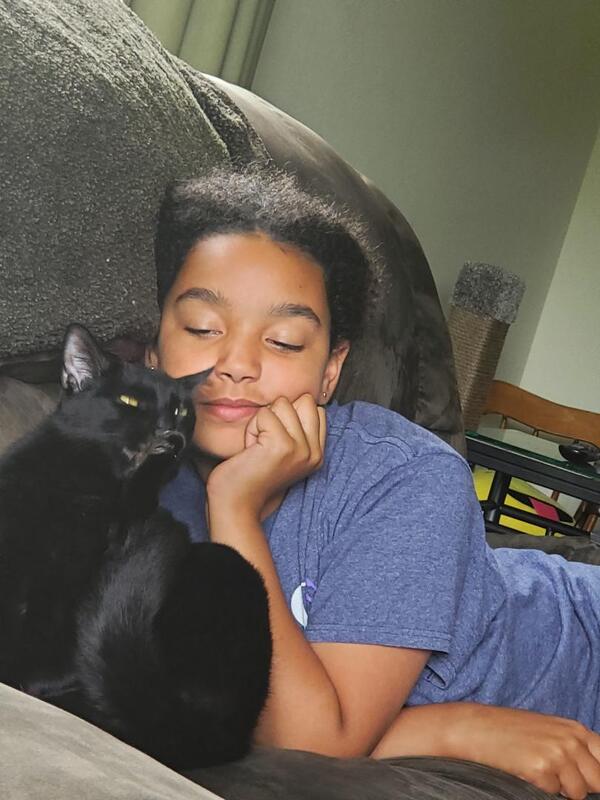 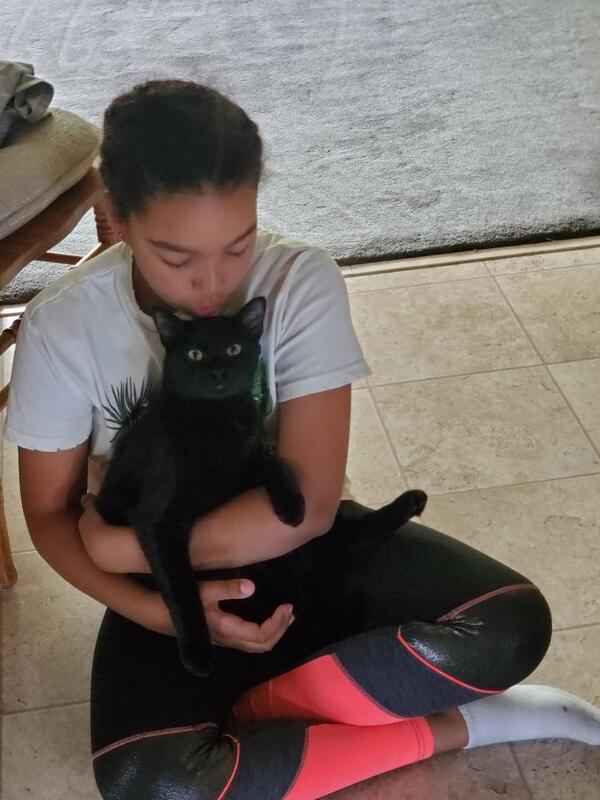 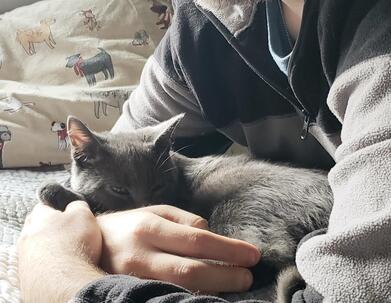 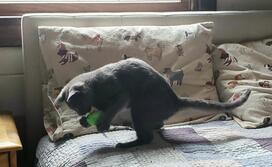 Rocco was adopted by Kevin and Liz from NH and Rocco went home on June 22. Rocco joined one dog and one cat in the household.

Just 2 days after Rocco was home, Liz sent a note.

Rocco is moving fast when he's not asleep. ❤ He seems to be feeling much more at home and showing signs that he really wants to explore the rest of the house. In fact he tried to make a break for it this morning!

We introduced Rocco and Maisie (the resident cat)  face to face with the baby gate a couple days ago and it went really well for their first full view of each other. Almost no hissing, lots of sniffing, some paw play. Once we did that, they then started to bat paws with each other under the closed door throughout the day. And now they do this a lot! 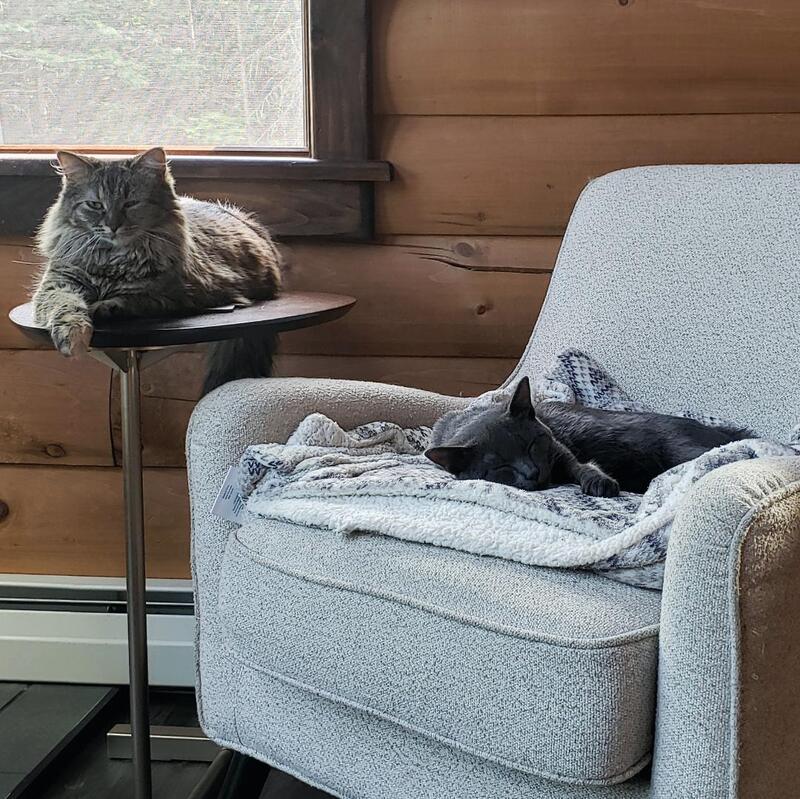 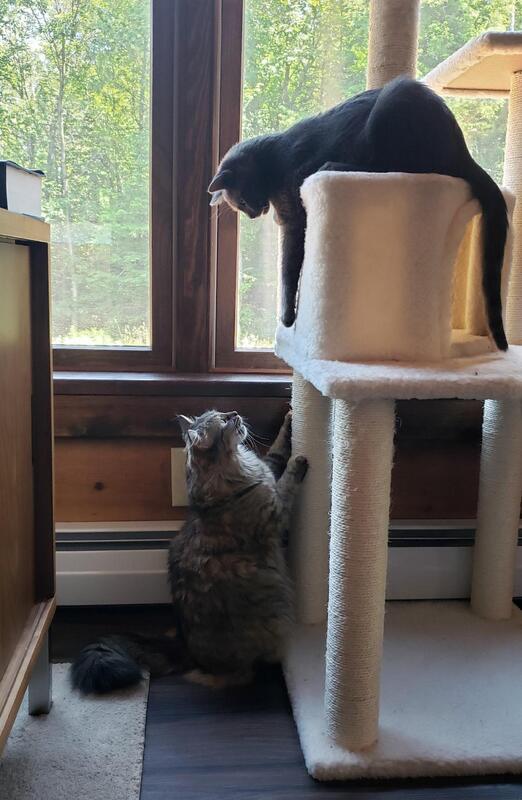 And as of July 10:
We feel that Rocco is just about fully integrated into our family now. He doesn’t need to be separated when we’re out of the house. The only thing “at risk” when he’s around is the paper towel roll in the kitchen!  He definitely seems like he’s home and content.  Maisie and Rocco still play together a lot, but I find it to be much gentler than before, and it’s so adorable when they are both laying with their heads close, and gently boxing with their paws. 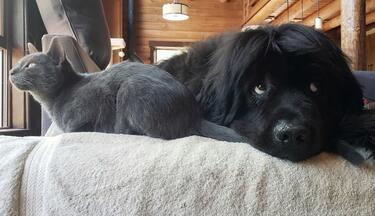 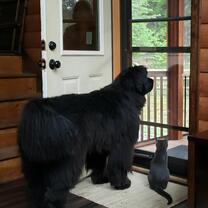 Holly (the dog) loves to go over and sniff Rocco while he’s in the chair, because he’s close to her head height. She sniffs and puts her head down next to him and he doesn’t mind in the least. It’s so much fun for Holly to be able to interact with one of the kitties, and she continues to know that she needs to be gentle. I guess they call Newfs “gentle giants” for a reason. 😊

Another fun thing is that a few nights ago Rocco started visiting us in bed at night, and oh my goodness it’s so sweet.  Rocco can’t seem to pick one person so he goes back and forth between us, whether it’s in bed or on the sofa. But this is just another sign that he is accepting this as his home and accepting us as his family."​ 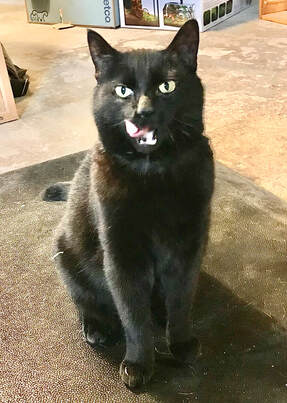 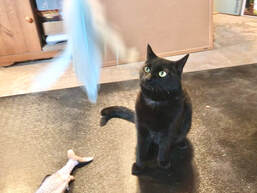 This 9-year-old perky little cat was surrendered to the Shelter because she didn’t seem to fit in.
In her first home she got scared out of the house by a new set of family dogs, then she was passed to a relative. But having her own mind and not matching with an inactive small-apartment life sentence, Poppy showed her disagreement until she wasn’t wanted anymore.
​
Although she didn’t come highly recommended as a pet from her previous owner, her foster parents quickly discovered the real Poppy. She thoroughly enjoyed the refuge of a quiet, safe and patient home where her quirky cat-ways were understood and appreciated.

After a few days in her foster home, her foster dad Caleb wrote “I wanted to quickly give you an update on Poppy because she is doing so well!  She is an outgoing love bug, and we think she would be really easy to adopt. She likes to perch up high and look out at stuff.”

Nancy from Milton, VT adopted Poppy on June 11th and gave her a wonderful home with lots of windows to watch out at bird feeders, lots of rooms to explore and a couple of cat-loving humans all to her own. 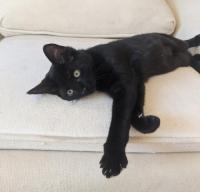 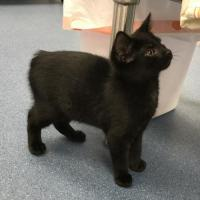 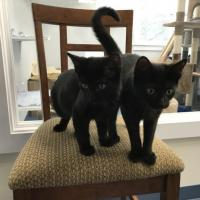 Scout and Finch are two kittens of a large family of bobtailed black kitties, who all have the most endearing qualities.
These two affectionate siblings were adopted by a family with children in St. Johnsbury who promptly fell in love with them. They made themselves home in a heartbeat, charmed the children, parents and grandparents alike and found their undeniable place in the family.

Their new mom Rebecca reported that they were snuggly sweethearts, good with each other and with everybody they meet. “They are with us in every room, whether sleeping or playing, so sweet. When the little girl was brushing her teeth, they were sitting on the sink watching her, one cat on either side. They are totally relaxed around the kids and totally acclimated to their new home.”

Scout and Finch have several young relatives who are still looking for their forever homes. All of them are wonderfully friendly and human oriented. They are gorgeous with shiny black fur, bobtails, and Siamese traits. These cats are gentle, vivacious, playful and very athletic:
Katarina, Anise and Licorice, Ebony and her 4-month-old kittens Guinness, Fiona, Liam, Clover and Aidyn.  You can read about them here on the KAS website: https://www.kingdomanimalshelter.com/available-cats.html