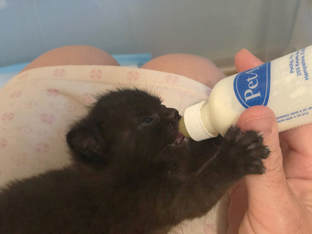 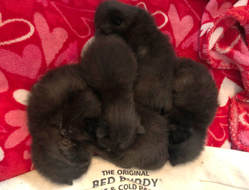 Ricky, Pink, Peach, Lilac, and Apple
In mid-June, a passerby discovered a surprising sight on the side of Route 5: five tiny, black kittens, all alone.  After a trip to the vet, it was determined that the kittens were about 1 - 2 weeks old.  At this young of an age, kittens need to be bottle fed every 2 hours.  After their discovery, there was a rush to find a foster home that would be able to feed, care for, and nurture these tiny balls of fur until they are old enough to go to their forever home.  Luckily, we were able to find a foster home for them relatively easily. Now, all five kittens are doing great and thanks to many donations of KMR kitten food powder, they are happy, fluffy, little kittens. 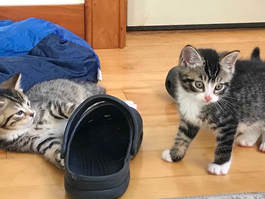 Barry, Merley, and Po (All Adopted!)
Barry, Merley, and Po were discovered living under a porch in Sheffield when they were about 8 weeks old.  They are now about 3 months old and are doing great in their foster home and are healthy, playful kittens.  They are very rambunctious and love to play and wrestle, especially while eating. 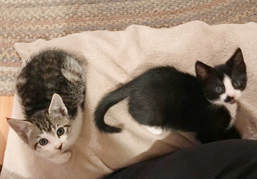 Sherlock and Watson (Both Adopted!)
Sherlock and Watson were abandoned and found on a porch in Lyndonville when they were about 8 weeks old.  They are now about 3 months old.  Sherlock is extremely outgoing and loves to sleep with his people.  He likes to be petted and loves people.  Watson is a bit more aloof, cautious, and independent.  They both are getting used to dogs, and they do well with young kids and other cats. 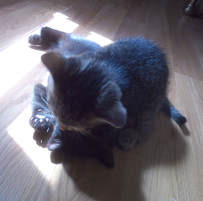 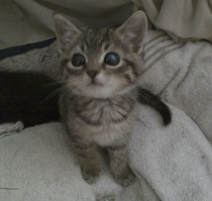 Sebastian (Adopted!)
Sebastian was one of five kittens born to a feral mother.  Shortly after we got him, it was discovered that he is blind.  He is currently in foster care with Beauregard and Wendell, and he loves to play and hang out with them.
Sebastian is already adopted!
Interested in Adopting One (or More) of These, or Other, Kittens?
Frequently our kittens are adopted straight out of their foster homes because there is such a demand for them. For that reason, if you are interested in adopting kittens, it is recommended that you send in an adoption application and authorization for release of information, both of which can be found on our website at http://www.kingdomanimalshelter.com/adopt-a-cat.html, or you can pick them up at the shelter during adoption hours. Once you fill them out, you can either email them back to adoptions@kingdomanimalshelter.com or drop them off at the shelter during adoption hours, or mail them to us at Kingdom Animal Shelter, PO Box 462, St Johnsbury, VT 05819. Our adoption hours are listed on our website at http://www.kingdomanimalshelter.com/hours.html. When you fill out the forms, if you don't have a specific kitten or cat in mind, you can leave that field blank, and once your application is processed, you can select a cat or kitten who fits what you are looking for. Getting approval early in the process means we can arrange a time for you to meet the kittens prior to them getting into the shelter.