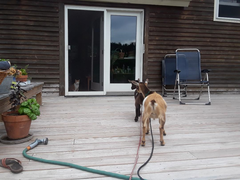 This past summer I noticed that Julia, through her role at KAS, was placing foster kitties among her friends during the restrictions of covid times. I thought “I can do that”.

Enter into my life Mr Budster, a red American Tabby of a certain age.

Only glitch was that he had a non-healing area on his nose which needed checking out before his arrival, in order to avoid passing any possible infection around my home and outside critters. This happened on the way here, the vet said it looked like cancer, not organisms. A couple of trips and tests later this was confirmed. Buddy, who already suffered from high anxiety, was growing more fearful of potential trips even as we both became so fond of each other. I committed to keeping him here, no more trips, which is how it has gone.

Buddy was rapidly becoming the King-of-Quite-A-Lot in his new home.  He enjoyed ruling his kingdom from the rocker next to the stove, reminding me when his box was ready to be cleaned, time to eat again, be rubbed, calling his lap time....I let him be while showing him that he was loved. I apologized when I accidentally bumped his nose, and he got it. We spent so much lap time together that I posted a little thought on my fridge, "A cat is an inspiration to be useless." As he would rub his head on my hand I sang him that silly song, "Soft Kitty" from Big Bang. He loved it. I swear he laughed at me, and smiled about the appropriateness of the music.
His fear of other animals didn't exist as long as there was a door between and they showed deference to his need for respect. His curiosity was so cat-like, with the dignity of maturity.

I adopted Buddy in order to guarantee him a home to the end, however soon that would come. Yes, I had definitely succumbed to that strongest of motivations, I love that cat.

The time came when the effects of his cancer crossed the line from workable to miserable, with a sudden rapid slide to the end. It was time for Buddy's last vet visit, at home. That morning, while his preparatory medicine was taking effect I talked to him, hoping to distract him, help him relax as his body started to feel weird from the medicine. We talked about what he has taught me, and this is what we said. 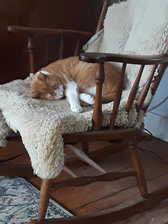 And sure enough, the rest of Buddy’s last day was better than fine. He relaxed, his pain and anxiety were gone, even though he stayed awake far longer than the vet expected, with his paw curled around my fingers. He died slowly, comfy in his favorite rocking chair. I was right with him all the way. I even sang that silly song as his final purr faded away.

Buddy taught me that loving can be relaxed yet attentive, cuddly yet spacious, unknown yet clear, no expectations yet full of sharing, giving and tons of affection. Good love, f'r sure.