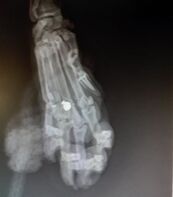 In mid-April a good friend of KAS found an amiable senior cat walking around the Fairbanks Museum, quite skinny and seemingly a stray. Since nobody claimed her, she was surrendered to the Shelter and made it her home with confident strides on her dainty little paws, quickly winning the hearts of all the volunteers.
​
We called her Nina Padma (padma means lotus, which is a symbol of compassion).
Nina Padma turned out to be about 10 years old, fearless and calmly affectionate on her own terms, neither daunted by being blind in her mysterious left eye, nor by being nearly deaf. Soon her health improved with the right nourishment and thyroid medication.

Nancy Rivet, one of KAS’s Board members who adores older cats couldn’t resist her. Nina became her very own; she went home with Nancy on May 29th and was named Nina Lou.
Only a few days later Nina Lou started to limp badly. The vet found that an old gun pellet was lodged in Nina’s paw, which had broken some bones in the past and must have been very painful at the time, but it had healed over. Now the old wound had broken open again.

Nancy is nursing her Nina back to health. They are getting to know one another, and Nancy is falling in love more every day. This very special sweet cat couldn’t be in better hands! 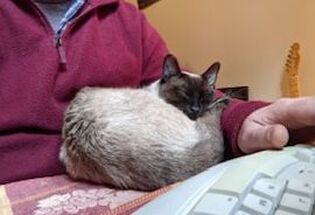 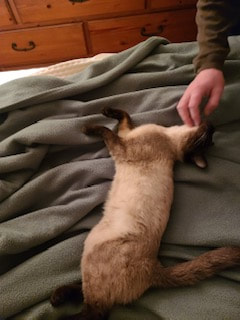 Milo, now called Moki, a beautiful young Siamese boy, was found as a skinny tick-ridden stray, eager to make friends with everybody. He was adopted by Emily and Ryan and went home with them on May 1st.
Moki was doing great from the start. He slept with his new people his first night home. He loved exploring everywhere in the house. He followed them everywhere, played and rolled on his back for belly rubs.
Emily said that he was not hiding at all; he was a little sweetie but clearly a rascal too. He was very smart and knew their patterns already. He was getting up on counters (which they were working on). Emily said he had a cute high-pitched meow and a good purr.

Update from May 8th
Emily wrote: “Things are great. He is a lovely snuggle bug. Last night he was naughty and climbed the Bakers rack to get to his food on the top shelf. He knocked off a potted plan to get to it, making quite a mess. He is super comfortable and interested in everything. Hoping since he is so smart, he will learn the rules of the house. We love him.  He is always starving or telling me he is starving. I will ask the vet about it when he gets his next vax. Hoping he realizes he has forever food and he will calm down about it. He has great hunting skills with fake mice. He loves his tower. He is a fun little boy to play with.
Update from May 25th
Emily says that Moki is very loving and sleeps with them every night.
Moki loooves to play. He plays with just about anything and carries his toys around like a prize. He makes his family laugh, and they are very happy with him. He is very confident, a bit sassy, wonderful, and a bit naughty. Emily says that he is a smart boy, because he knows he is not supposed to be up on the counters, so he watches until they leave the room, then climbs up and jumps down when they return. Moki greets them at the door when they return and also greets strangers when they come in! Moki loves when the doors and windows are open to accommodate the breeze and nice weather.
The family has recently adopted a 10-week-old female kitten called Meera. So far, they are very interested in one another when they meet at the baby gate of Meera's safe room. 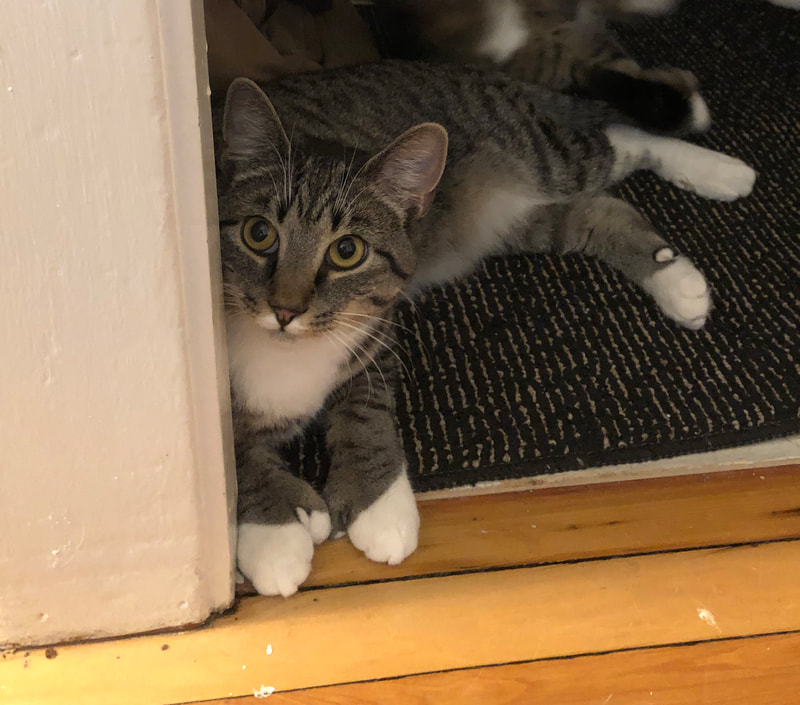 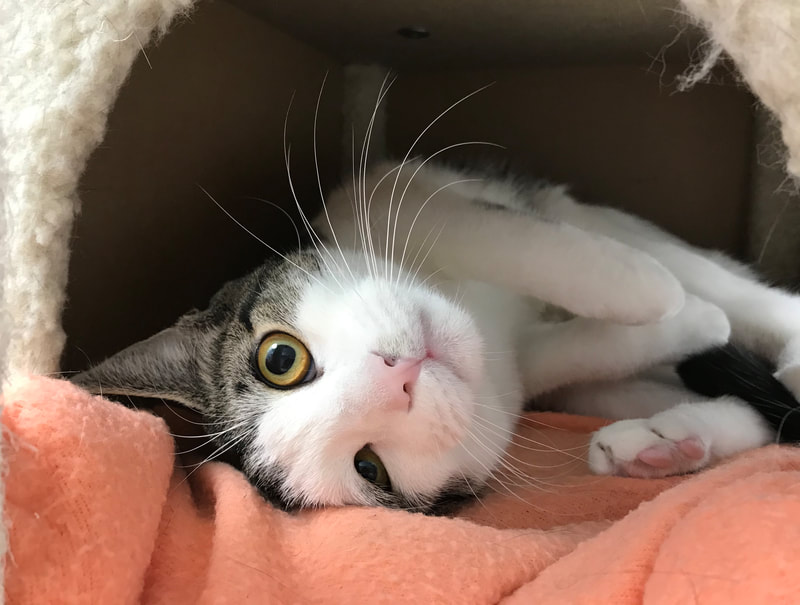 This close-knit trio of brothers was surrendered to KAS when they were about half a year old. They liked to sleep in one warm snuggly heap of fur. When one of them purred, the others would join in for a big purring concerto. They all were shy and they seemed inseparable, two challenges for their adoption that didn’t prove to be insurmountable:

On May 22nd Travis and Eric from Berlin, NH adopted them and took them home to be companions for their lonesome cat Raz. They knew that it would take patience to lure the three boys out of their shells, but the kitties had shown to be affectionate and keen on belly rubs from their foster mom and from volunteers at the Shelter, so it would only be a matter of time for them to trust their new people.

On June 4th Travis wrote:
The boys are definitely showing progress in warming up to their new home. That being said, they still have a ways to go. Petey has definitely made the most progress. He will now come out for pets, even if there are no treats being offered. He loves playing with a feather toy, and is the most laid back and casual.
Joshua will still not come out for pets, but if we come to him, he lets us pet him, and he seems to really enjoy himself. But he rarely will leave his corner of the world if there is a human in the room.
Gabriel is a mixed bag. He will come out to investigate whenever Petey is playing or getting pets. And Gabriel enjoys playing at a distance (like with a laser pointer.) The only time Gabriel will really get close to Eric or me is when we are feeding him treats or wet food. He has not let Eric or me pet him yet, but we think he's getting close.
Overall, their second week with us has seen some real progress, and that is very encouraging. Raz is curious about the sounds and smells coming out of the kittens’ room, but there has still been no sign of pending hostility. We are hoping this will continue when we prepare for introductions. The brothers are also curious about the cat sounds and smells coming from the rest of the house. We've done a few scent exchanges so far, and will be doing more in the near future.

As for the brothers' names, we have chosen their new ones:
Petey's new name is Tofu.
Gabriel's new name is Miso.
And Joshua's new name is Dashi.
We are using their new names frequently, and hoping they will start to identify with them in time.
All in all, everyone seems happy and healthy, both humans and cats alike.

Thanks again to you and everybody at Kingdom Animal Shelter. These boys are a special group with specific needs, and you all were very helpful in preparing us to navigate these unique waters. With the ground the brothers have gained in the past two weeks, Eric and I are optimistic about their growth in the future.