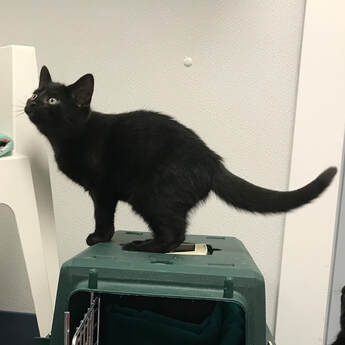 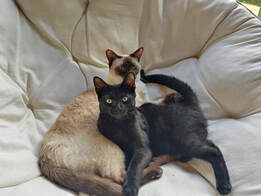 This little boy is one of five awesome black kittens of matriarch Katarina, a beautiful bobtail Siamese who is still looking for a loving home.

Atticus was the first of his siblings to be adopted. He went with Denis and Annette in NH, who were looking for a playmate for their lonely Siamese boy Tornado.
Cheerful and confident Atticus made himself right at home, to the great consternation of Tornado. But things have been going well with careful introductions.

"Annette said the pickup went great and she was very impressed with your shelter. She thinks that you all do amazing work and the kitties are incredibly well cared for. I had no doubt that any of this wouldn't be the case. I'm happy that we adopted Atticus at 14 weeks old. The 4 additional weeks of development goes a long way into integrating him into a new home. He's fabulous!

I have never had a kitten as relaxed and calm as Atticus. He is very cool. He definitely loves to follow me around and jump on me wherever I sit. For whatever reason he seems to have taken to me and he has been typically by my side. He slept by my head last night and I don't think he got up once.

Tornado is having a difficult time with his new roommate but isn't displaying anything out of the ordinary. I also think that a lot of progress has been made in the last 24 hours and things are already looking up. Tornado has allowed for a small zone in which he'll let Atticus up to before he gives him a quick, muted hiss. Atticus is intelligent and respectful and he will lay down facing Tornado when this happens. On several occasions Tornado will walk up to Atticus and sniff his nose, he even licked his nose once before hissing and returning to his safe zone about a foot away. I'm observing that Tornado has had his routine rocked with a stranger and that he is just trying to figure out Atticus's role in the family. When I brought Atticus down stairs this morning Tornado came running behind and waited calmly as Atticus had a drink. I then sat with my cup of coffee and Tornado came running over and put his nose on Atticus' nose and then backed off and gently hissed at Atticus. Tornado then sat on the floor and looked at Atticus for over 5 minutes before walking away to find Annette.  I do think things are going well."
​
On June 13th Denis wrote:

"Just so that you are aware we changed Atticus's name to Scout.

​Scout has always been great with Tornado. He always respected the boundaries that Tornado set and was happy doing his own thing for a couple of weeks. Tornado was incredibly curious about Scout all along despite being very anxious. His whole routine was turned upside down and he went a few days without eating and drinking. I was concerned about dehydration but he started drinking on the third day of Scout's arrival.

Fast forward to today and both cats are fully adjusted. Tornado will not let Scout out of his sight. He always watches him play and Scout has brought Tornado out of his shell. Tornado plays with Scout daily and they constantly chase each other around the house in a gentle manner. Very rarely do they sleep apart and Tornado has been sleeping much less than before his stepbrother's arrival. Even when he isn't in the mood to play, Tornado has to know where Scout is and he will sit and watch Scout run around and play for hours.

All is good and we are incredibly happy with our experience.

Thanks for all that you do!" 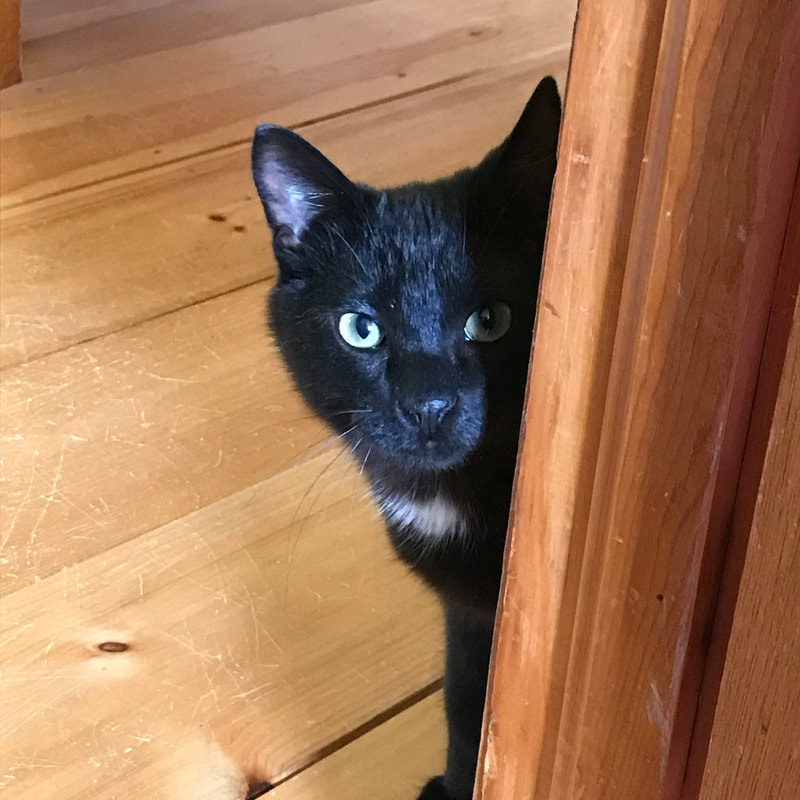 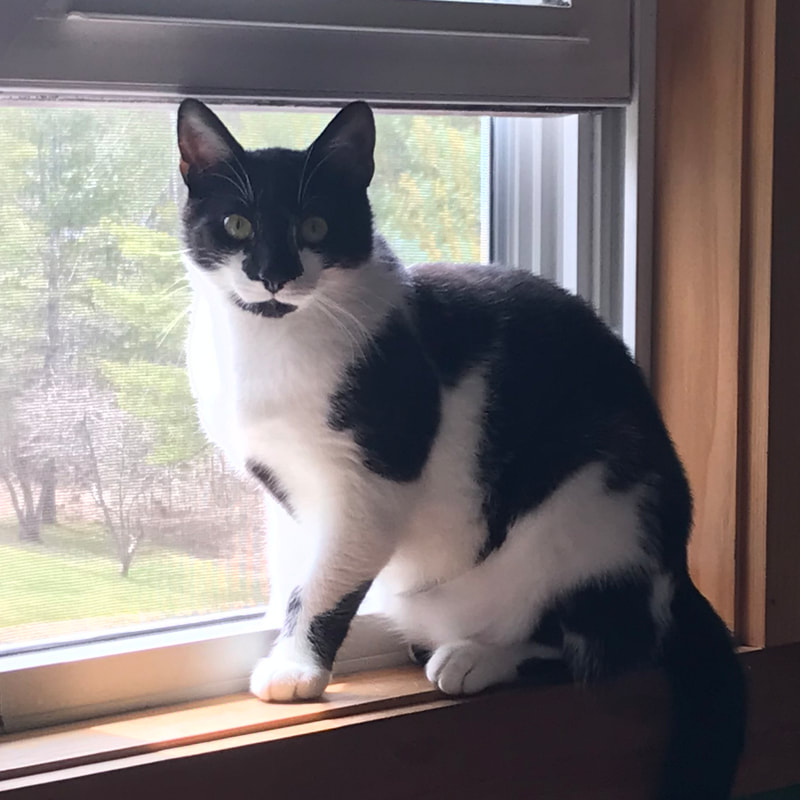 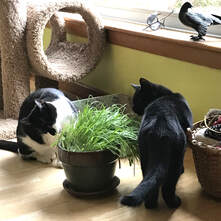 Beauregard and Chauncy are 11-month and 9-month-old youngsters and best friends.

These playful, sweet boys were abandoned in a run-down house in the middle of winter and had to fend for themselves for at least two months, along with a number of other young cats, until they were rescued.
They became quite shy during that time, and they must have gone through periods of starvation which led to anxious behavior around food. But they made great strides in their foster home.

Their foster mom Alicia said:
Both cats have learned to trust people, they want to be with us and meow to let us know. They have lots of energy and are very early risers!
Beauregard, who is black-and-white, loves to sit or sleep close to people but he still backs away when we try to touch him. He will lick fingers or touch them with his nose. He will run and greet us. He plays rough with toys but he is gentler with Chauncy. He enjoys to sit in a window and look out at the birds and squirrels.
Little black Chauncy is a love bug. He greets us with head butts, loves to be petted and purrs his approval. He plays on his own or with his friend Beau, and he chirps a lot. He can play rough, but he also can be very sweet.
They are both very vocal with little chirps. They are sweet boys.
It has been a wonderful experience to see them become comfortable, safe and lovable!"   ​ 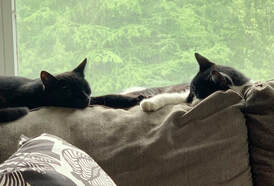 Chauncy and Beau went home with Kevin and Ann in West Burke, who have experience with shy and feral cats. The kitties will take their time to warm up to their new family. They couldn't have found a better place to do so.

"The cats are doing well. Poirot (aka Chauncy) will spend time with us and is seeking our attention, always on his terms.
Sibelius (aka Beau) remains aloof but will be with us beyond arms reach. We expect someday he will come closer, but in his own time.
They are both quite active chasing and playing with toys..."

Their first at-home photo shows them snoozing in a window on the back of their couch, feeling utterly cozy and relaxed. 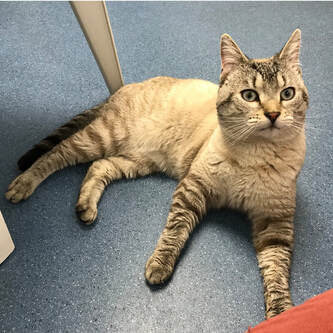 Frankie was an unneutered handsome young fellow who lived isolated in a bedroom for nearly a year before he was surrendered to the Shelter. Until he got into solitary confinement, he had caused a cascade of cheerful kittenhood to spill into the world by mating with every available female cat in the house.

Frankie was very well loved in his first home and a dedicated cuddler. During his short residence at the Shelter, he took every opportunity for lap time with his human caretakers. But the cat society felt different. Long after neutering he displayed such a strong tomcat perfume that there was no peace among the male residents for weeks. Everybody was eager to meet this guy and box his ears, and vice versa. 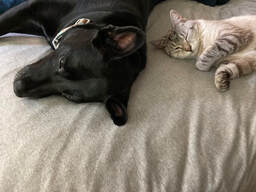 Frankie was thrilled when he could go home with his new dad Cawley who owns a sweet cat-loving dog called Murci. Maybe a dog companion would give this boy some peace...

"Things are going well, Frankie’s a charmer, very playful and agreeable. Murci gets along with everyone, so he quickly figured out she’s not a threat, and now they share the bed comfortably. My girlfriend’s cat is less amused by his antics, she’s 11 and has been the only pet in the house since she was a kitten. But she warmed up to Murci pretty quickly, and is tolerating Frankie. Meanwhile I couldn’t be happier with him, he’s such a love."​