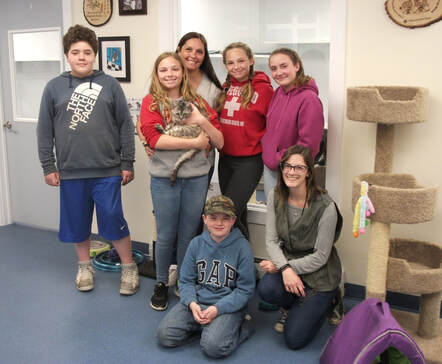 Standing: ​Riah, Bella with Zola, Holly, Peyton, Brianna​
​Sitting: Blake, Ms. Lyon
​The following articles are written by the Newark Street Students:
​
​Fundraiser for Kingdom Animal Shelter
​We Newark Street Students decided to hold a fundraiser for the KAS. Seven students and one parent and our teacher, Hillary Lyons, have been visiting the animal shelter for the past few months, once a week. We go to see the cats/kittens and we go to learn things about the cats there and to learn things about other kinds of cats and how to train them and how to act around other cats and a lot more. We decided to do the fundraiser for them. We raised many items for them. They received many items from our fundraiser that they needed. We held the fundraiser from May 6th-May 10th. Over that period of time we got many items from our peers. We knew what to ask for because we went on their website and found out what they needed and then typed up a flyer and gave it to our classmates and teachers. We brought all the stuff that we got them on May 15, the Wednesday after the fundraiser was done. We students came with our teacher and helped bring the items into the rooms where they store their items. We have been planning this fundraiser for a while now and we finally got everything ready and sent home the flyers. That Monday our classmates and teachers started bringing in items for the Animal Shelter and by the end of the week, we had gotten over $150 worth of items. We got a lot of cat foods, cat litter, and paper towels. They were very happy for all the items that we collected for them.  Thank you so much for everyone that donated to us and to KAS.


Bark In The Park and The Newark School
​On June 8th is the St. Johnsubry Pet Parade. We have been invited by the KAS to be in the parade. KAS will be having their own float. They are also doing a raffle. People buy a tennis ball and their name goes inside the ball. After the parade all the balls are put out on the grass of the park. There is a dog that goes around and picks 7 tennis balls and if the dog picks your tennis ball then you win a prize. If you buy a tennis ball for $5.00 you will get a chance to win many great prizes. There can only be one winner for the first place and the prize is going to get a cash prize of $500! There can be two people that get in second place and their prizes will be $100 each. There can be two people that can get in third place and their prize would be $50. And only one person can get in fourth place and they will win a dog basket with treats and toys. There can only be one person that comes in the fifth place and the last prize given out will be a cat basket with cat toys and treats. Winners will be drawn right after the St. Johnsbury pet parade on Saturday, June 8th. Thank you to Community National Bank for providing the cash prizes.

Newark School Students and Stash
When we first met Stash at the Kingdom Animal Shelter on April 10, 2019 Stash was very anxious. He was always looking over his shoulder checking to see what we were doing. When we were given a tour of the new facility, Stash had a box covering the gap in the bottom of his door. We were told if there wasn’t a covering, he would swat at people when they walked by. He also sometimes would bite volunteers that tried to pick him up. But now, the last time that we came to visit, one of our parents sat in the condo room with Stash. This was on May 15, 2019. She sat with Stash and even got him to purr. He wouldn’t normally purr with other volunteers. She was petting him and read his body messages well, she even read to him. She was with him for half an hour and didn’t get bit. Over the past month and a half when we have been at the Kingdom Animal Shelter, Stash has changed a lot and is even getting closer to being ready to get adopted. ​