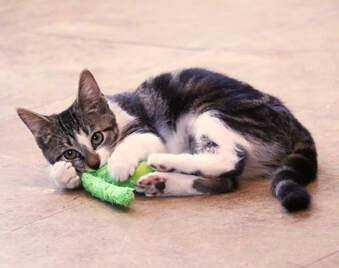 Geneva was just skin and bones and eyes when she was found close to starvation on the Rec field in St. Johnsbury on a hot summer day. Although she looked pitiful, her spirit was unbroken and cheerful. With a little nursing she became a bundle of joy who was relishing life in its fullest. And the little gooseling turned into a beauty, inside and out.
She would cuddle and play with everyone and be the first to greet you at the door like a puppy! In fact, she was super happy to meet dogs when she became a foster kitten at Deanna's pet grooming center. She tried to rub up against the visiting pups all the time.

Renee and David from St. Johnsbury were looking for exactly such a kitty to take home and love.
Their two-year-old Golden Retriever Ruby adored cats as well and was longing for a feline friend to snuggle and play with. Geneva happily moved in with her new family the week before Thanksgiving.

Renee wrote:
"We are doing fantastic here! Geneva is a joy to have around. She fit right in from the very first night and loves everyone and especially her dog sister, Ruby. They are best of friends and are nearly inseparable!"
"We had a very quiet Thanksgiving at home with just Ruby and Geneva who have bonded tremendously. They play the whole length of the house on a daily basis. They tire one another out too! Then, Geneva grabs a cat nap in the sunny living room window while Ruby curls up as close as she can. "
"I've told my family and friends that it was a "match made in heaven!" We are ALL happy about our decision.
Happy holidays to you and everyone at the shelter and beyond!" 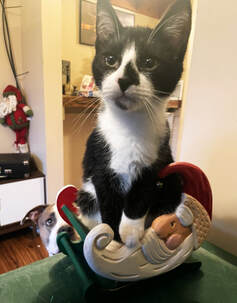 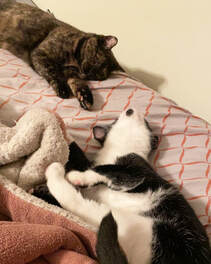 Little Georgie was a special gift from nature and one of a kind!
When he and his siblings were found under a porch in Cabot, little did we know that he came with an extra big portion of kitten love and a totally fearless attitude to life. Had he ventured out before he was rescued, he would have walked up to Coyotes and Racoons wanting to make friends. And there is a tiny chance that he would have disarmed them with his charm as much as his humans...

Foster mom Deanna, who runs a dog grooming center, soon discovered that Georgie was different than other kittens.
She thought that Georgie was amazing and odd, a bit like Lenny in Mice and Men: "He is super affectionate and needy, no fear, never wants to be alone. He is a lot of cat…. It will definitely take a special person to deal with his personality. He gets into EVERYTHING.  We have to crate him when we eat as he tries to dive into your dish!  It’s not like he is hungry, just nosy!"
She also discovered that Georgie loved dogs and couldn't get enough from playing with them.
Deanna seriously considered adopting Georgie, but his advances were overwhelming to her resident cats. He just didn't know social boundaries... 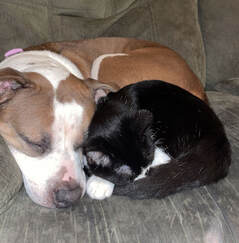 Deanna's assistant Mila was eager to find out if this amiable boy would fit in with her own pet family. Her sweet Pitbull Gema and her cat Twix would have to agree to the new housemate, so Mila took Georgie home for a trial.

On November 4th Mila wrote: "Georgie fits in so well here. He and my dog Gema are two peas in a pod! She is so gentle with him and loves to groom him all the time. My cat Twix is also starting to love the little guy! He’s won all of us over.
I tried putting him back in his foster room after our 'trial', not knowing what the outcome of my application would be. But he cried at the door until I went back in and picked him up. He’s such a love, and I would absolutely love to have him but also understand that there is a process that you must go through, when finding homes for these little guys. Deanna called mine his “perfect home” the other day and that really pulled at my heart strings."

Mila was soon approved as Georgie's new mom and took him home for good.
On November 22nd Mila wrote: "Georgie is so very happy, as are my other fur babies and I.
He completes my home and I can’t imagine life without him now!" 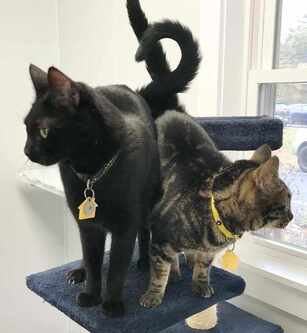 This bonded pair of a brother and a sister was surrendered by their owner who sadly couldn't keep her kitties due to health concerns.

Jasper is an outgoing, gregarious fellow who loves to meet new people. Pearl is a gentle sweetheart. She is a little timid in new situations and literally leans on her confident, cheerful brother.

They were adopted by Gretchen and her mother from Wheelock, Vt.
Gretchen and her family live in a quiet, peaceful home with plenty of room for cats to zoom around and many windows for watching birds and wildlife.
Their adoption counselor Nancy wrote a day after Jasper and Pearl's adoption:
"The family reports that they are doing GREAT! They got home, came out of their carriers immediately, began checking out the house, and very quickly found a lap or a bed to snooze on. They both have been affectionate and at the time of the call, Jasper was hanging onto Gretchen's leg and Pearl was napping in Gretchen's daughter's lap! Overall, a wonderful start into a new life!"
​ 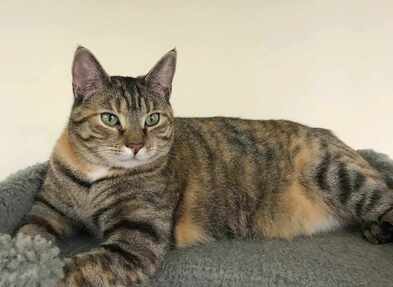 ​Katsura arrived at the Shelter with a large group of semi-feral cats. They had been abandoned in a run-down house in a neighboring town for several months in the middle of last winter.

At first, Katsura was one of the kitties that seemed more inapproachable than others. She would hiss and growl when people came close to her cat condo. She was very scared in her quarantine cage.
But when she was moved into a spacious colony room together with one of her sisters, she turned out to be quite sweet and cautiously interested in making friends with her caretakers.

Over time she became super friendly and the star of the Shelter! She would run to greet people at the door. She loved pets, and eventually she even dared to sit on a lap. She was very sisterly with all the other Shelter cats and had just the right way to approach a newcomer. She was friendly and welcoming without being too much in a new cat's face.
​They all trusted Katsura quickly and felt at ease around her.

With such excellent social skills, she became the perfect assistant in working with two very shy cats: Amahl and Geraldine. She befriended them and encouraged them to come out of hiding. With Katsura's help both cats made great progress in being more confident and trusting around humans.

After doing such a great job Katsura got the biggest reward: She went to her forever home with Jill, one of our volunteers. Jill and her partner Rita felt that they won the lottery!
The last hurdle for them would be to introduce their resident cat Fannie to the idea of a new roomie. They knew that it could take a while; but if anybody could convince Fannie to new cat-company, it would be Katsura!

On November 30th Jill wrote:
"We are moving along, slowly but surely, with Katsura's intro to Fannie. They are looking at each other often through a 2-inch gap in the door, and we are letting Katsura out into the main part of the house for an hour or so every day (this will increase), with Fannie closed off in her own room. Every now and then Fannie will let off a little hiss, so I don't think she is quite there yet, as far as meeting face to face is concerned.
We spend a lot of time with Katsura in her room, playing and petting and lots of treats. She is gaining in her confidence daily, and we really enjoy having her here. We look forward to getting her out into the house full time!"
​
Nash and Penny

Black-and-white Nash and fluffy Penny were rescued under a porch in Cabot, Vt, together with their brother Georgie.
They were very shy at first, little Nash in particular, and they took comfort in each other's presence. But once they moved in with their foster mom Deanna, who runs a pet grooming business, they started to feel more and more at ease.
With Penny's special looks, KAS got several requests for adoption on her own. But we wouldn't have separated them. Nash would have felt very scared and lonely without his protective sister.

At Deanna's doggie day care they soon caught the eye of Jennifer from West Burke who longed to add some young playful energy to her pet family. Her two large gentle dogs could use a little perk, and she had a big beautiful sunlit house to offer: a heavenly playground for any kitten!
She decided at once to adopt Nash and Penny.
After taking them home, Jennifer reported: "Penny and Nash are doing really well. They are exploring the house, cuddling on the couch with me, and are very comfortable around the dogs. Their eating schedule is in place. Nash has the best purr. Penny is funny. She has found a perfect hiding spot in the folds of a blanket."

Thank you, Jennifer! They both have found their perfect, loving home.