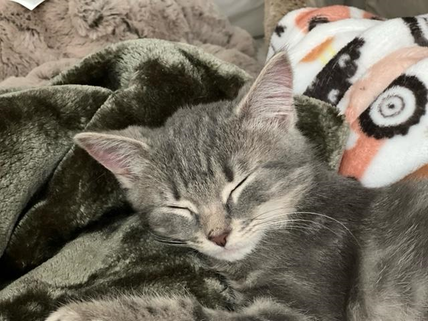 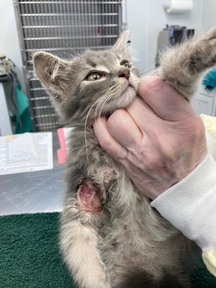 Many of you were so taken with Oliver’s Story.  He was a beautiful, light gray tabby feline boy who came to KAS on August 15, 2022.  A concerned supporter of KAS called us to say they had found him in their yard, somewhat late at night, had taken him in, but wondered if we would take him.  There was a caveat.  He had a pretty bad wound on his right front leg, and his paw was bent under when he walked.

We took him in and named him Oliver.  And he was such a love…affectionate, purring constantly, lively.  But…he was quite underweight and infested with lots of parasites.  We cleared those up, and gave him antibiotics.  And his wound began to heal very nicely.  But the paw stayed curled under.  It was determined that there was significant nerve damage that would never recover, and it would be best if the leg was amputated.  And…so it was…on Sept. 30. 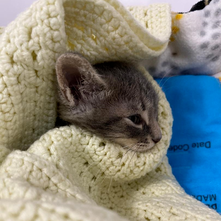 We received so much support for Oliver…in good wishes, and in monetary donations.  Those donations covered the cost of his surgery and post-op care.  We are so grateful.
And now…the very best news.  Oliver is doing just fine as a three legged kitty.  He went home on Sept. 9, and is now a beloved part of a family of two dogs, an older cat, and two other KAS alumni kitties, Walter and Sonny.  Walter is especially enamored of Oliver. 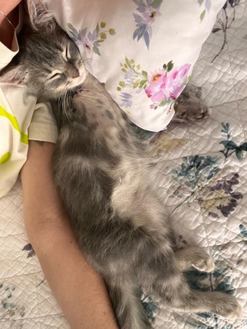 Here are some updates and photos from his new human mom, Mandy:
​
Sept. 10
He was very cuddly last night and stayed close to me all night. Very little sleep was had between playing, nose kisses and neck snuggles. He’s been napping most of the day

Always hard to pull myself away but getting ready to bring the dogs for a walk and spend time with the boys….and maybe a nap for me too.
​ 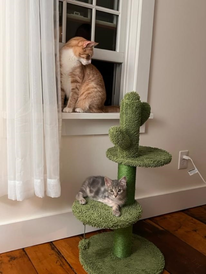 Sept. 14
Oliver and Walter have become fast friends. Sonny is a bit slower to warm up, but he is getting there.

Sept 16
I let Oliver explore the house today. He did great. Checked out every corner, with Walter right behind him. I thought at one point Walter was going to pick him up and carry him back to our room 🤣.  He jumped through the cat hole with no problem and even used the litter box!
I have to tell you. He reminds me so much of my girl Charlie who we lost in November. Something I can’t explain. I have said from the beginning there was this unexplainable connection I felt to him from your very first post. We absolutely adore him. Thank you again.
Sept 20:
Oliver joined our family a little over a week ago. In a few words Oliver is spunky, brave, all love, all heart and he is absolutely adorable. He has fallen into place seamlessly and made fast friends with Sonny and Walter, both former KAS kitties. I can’t thank Helen, Rod and all the KAS volunteers  enough for all they do for their animals. The compassion and attention they give is second to none. I am so lucky and honored to be Oliver’s mom!

​Click here to see a video of Oliver playing. 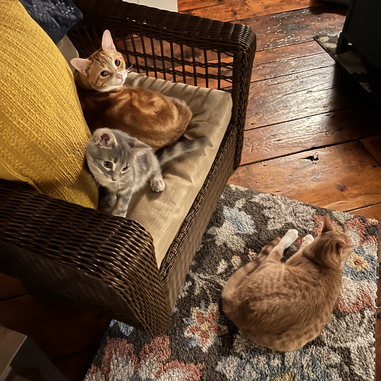