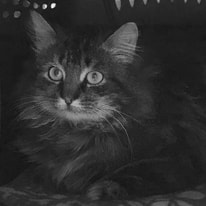 Kingdom Animal Shelter often gets calls to take cats that aren’t quite the easy, well-socialized cats that adopters are usually looking for.  They may be semi-feral or even feral.  We try our best to bring them to a place where they can be socialized enough to be in a home.  And we do that for a good length of time, not giving up on them.  We recently got a kitty, Sheldon, from an adjacent town.  He was quite frightened and hissed and lunged whenever a volunteer would come into his room to tend.  But we are very lucky to have a volunteer who has spent significant time with him, doing Reiki and Aroma Therapy, and he is progressing nicely.  One can now sit in his room and he will come out and eat and then groom, being much more relaxed. He will even reach out now and touch a hand gently with his paw.   And he seems to very much like to be read to and called “pretty boy”.  Sheldon has excellent prospects to be an indoor pet and is available for adoption.
Occasionally, however, it is very clear that a cat we have is just not going to be happy confined in a home, and not going to want to have any human connection.  They will be happy to be outside, well tended, kept as safe as possible, and perhaps ultimately allowing human nearness.  These cats are then considered for our Barn Placement.

Last Fall, we trapped a mom cat and her five kittens.  She had given birth to her kittens in a barn loft, in among the tunnels of hay bales.   We named her Clarisse.  The five kittens ended up being the Reindeer boys...Santa, Prancer, Comet, Blitzen, and Dasher.  All five boys have been well socialized and adopted to wonderful homes.  Clarisse stayed in foster all winter with one of our experienced fosters, to keep her safe.  But even with our foster’s experience with such cats, Clarisse never warmed up and was obviously not happy being confined in a home.  This Spring, Clarisse went to her new home at a farm...with lots of hay bales made into cubbies and tunnels, and chickens and goats to keep her company.  For about a month, she will be confined, in a large area...with food, water, a litter box, her toys, and a big window to the outside for her to observe all the goings on.  By the end of the month, she should then know that that is “home” and can be let out to begin her new life.

Kingdom Animal Shelter is possibly unique in its approach to barn cats.  We require an application and commitment to good care.  We ask for a safe room or enclosure, of good size, where they will have food, water, toys, a litter box, and bedding for a month.  After a month, the cat will hopefully then know this spot as home and will stay.  It knows that it has shelter and food there.
Some shelters give out barn cats, ferals, and simply say, take it home, keep it in an enclosure for a few hours, and then release it.  Of course, probably the cat will disappear...either leaving the area and/or being taken by a predator.  It isn’t a recipe for success.

One of our adopters, Liz Liacos, has adopted several of our appropriate barn cats.  She has done a magnificent job of slowly introducing the cats, Ebony, and then Colleen, to their new barn home...giving them a good month enclosed, with care and food before she lets them out.  They are thriving….and we are so grateful to Liz for her attention to their success, happiness, and survival.
​ 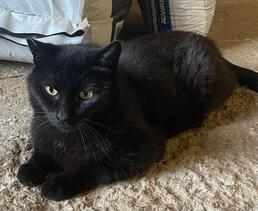 Slash (formerly known as Ebony) was adopted from KAS many years ago and has happily resided at Cottonwood Farm in West Newbury, MA.  As Chief of Rodent patrol, he happily patrols his equine farm, keeping it free of unwanted critters.  Although a barn cat, Slash still enjoys attention and being petted.  If you ignore him though, you get a good swipe to remind you who’s in charge!
​ 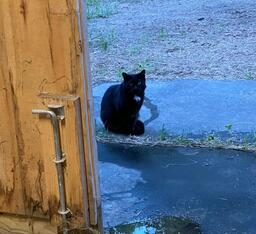 Colleen was adopted from KAS in 2019 and joined feral kittens, Spooky and Spicy.  She resides at Brook Haven Farm in Chester, NH,  an equine retirement sanctuary. Although she won’t allow you to pet her, she regularly shows up for meals and gives the evil eye, if you dare be late in serving her. 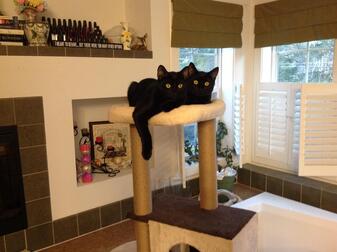 Colleen's kittens in their new home