Santa and His Reindeer…. in May

Last October we received a call from some folks in East Burke that there was a female cat coming around.  These folks were feeding her but didn’t want to take her in.  And she did seem feral.
The woman called a few days later to say that a very young black kitten had fallen out of the hayloft.  Our trapper, Nancy Pellegrino, went up to see what the situation was.  Low and behold, there were five kittens in that hayloft.  We trapped the kittens and the mom.  Those kittens were named Santa, Dasher, Prancer, Comet, and Blitzen.  Here are some updates on what we refer to as “the reindeer kittens”.  Enjoy.
Dimitri and Blitzen
-Gene and Pat Kelley
We are very thankful for having found our kittens Buddy (Blitzen) and Ollie (Dimitri) at Kingdom Animal Shelter. Not only because Buddy and Ollie are so wonderful and bring such joy to our lives, but also because the people at Kingdom Animal Shelter (Julia, Nancy and Helen) were and are so caring, helpful and knowledgeable. ​
​The above pictures were taken shortly after the boys came to live with us. It is hard to believe, as I am writing this, that the boys have been with us for three months and have grown so much. They still make us smile and laugh every day, with their playing, loving, purring, shaking hands/paws for a treat,  scampering down the stairs when they know it is time to eat, Ollie’s talking (little whimpering meows and coos) and Buddy’s almost total silence. 😉

Below are a few pictures of our boys taken over the past 3 months. 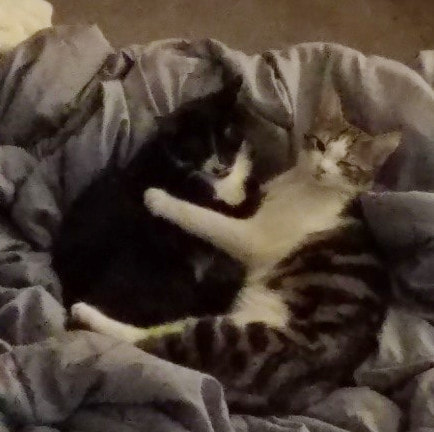 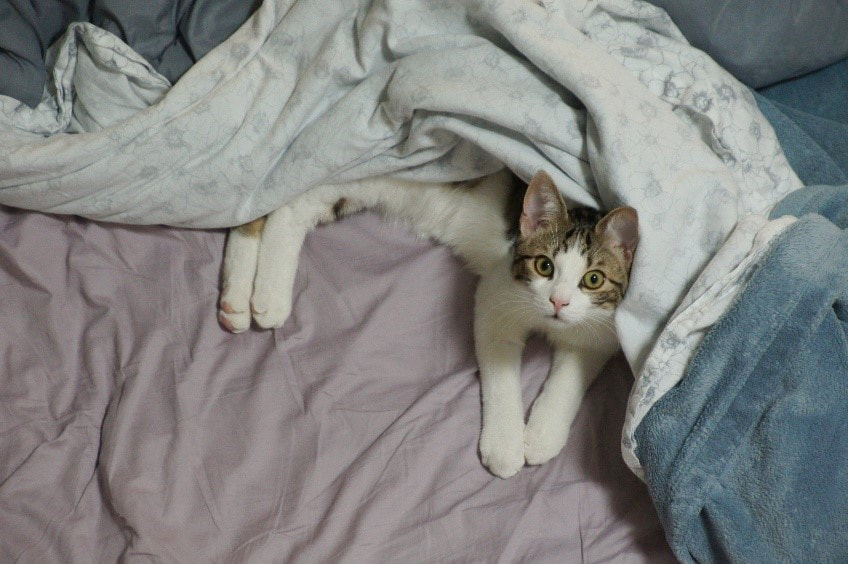 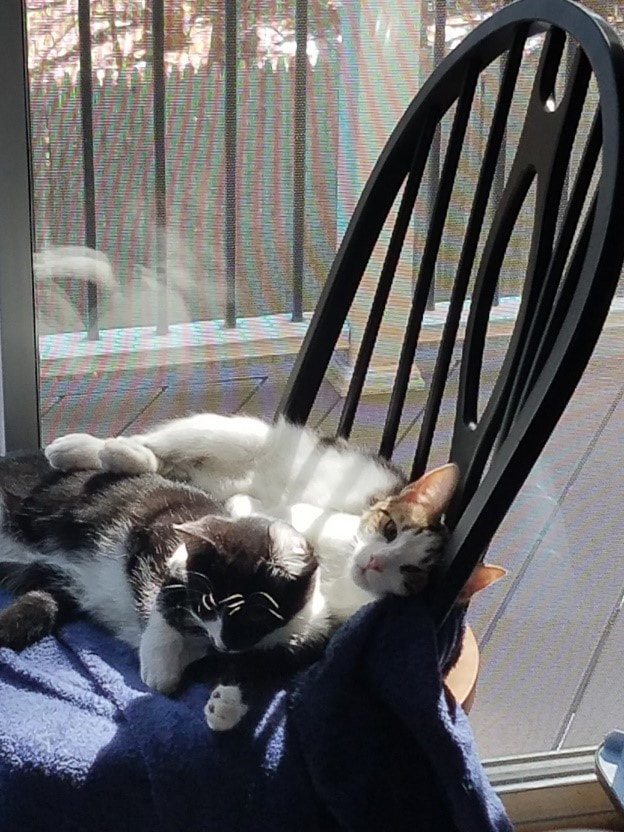 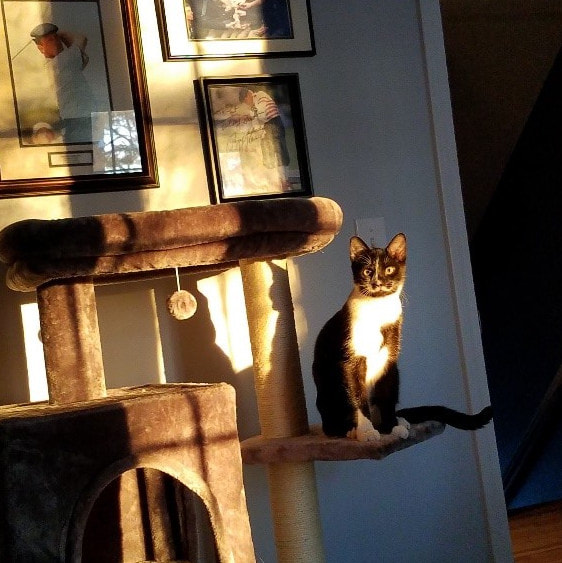 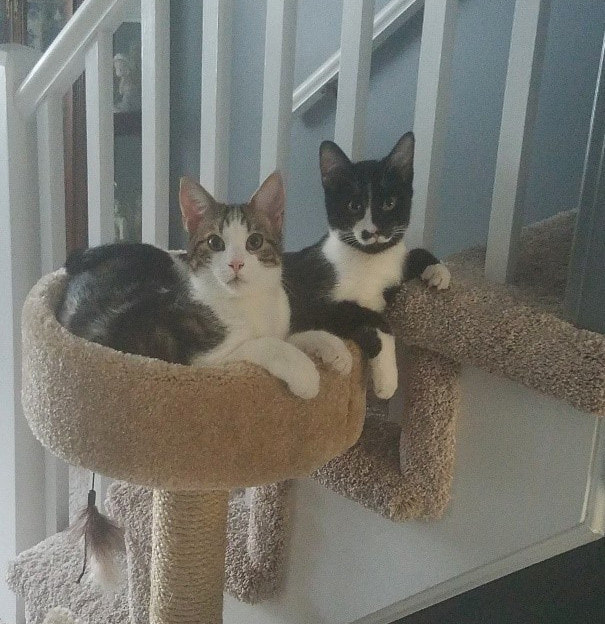 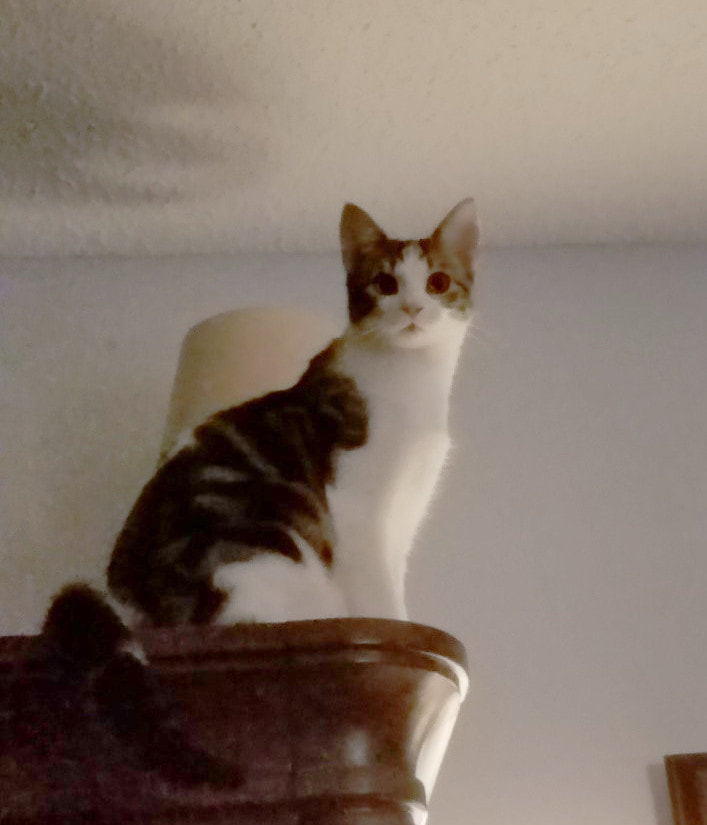 February 6
They own this house now...Mornings are like a racetrack around here.  They’re both running full board from one end of the house to the other.  Sounds like a heard of elephants.  This time of night they’re sleeping, both are on the cat tree right now.  They sleep at the foot of our bed after we go to bed, though I think they might prefer their cat house/tree tonite.  They are doing really well.  Ozzie gets moody sometimes he’s still adjusting. We just love them both!!

April 25
The boys are doing fabulous!! They are both love-bugs.  Both wild & crazy guys..lol...Ozzie (Comet) ended up taking to me, yup he’s a Mommas boy...Charlie (Prancer) loves everyone..lol. They both play with the outdoor cats through the window.  It’s fun to watch.  I’m including a video & I'll send more pictures in a second email...We love them... Donna & Tim 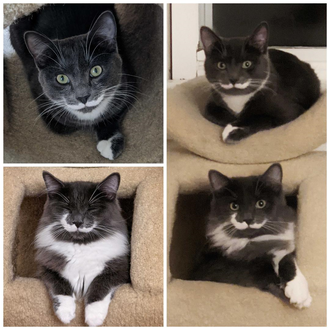 Santa and Dasher
Santa has the most wonderful purr, Dasher LOVES playing with his little red string, and they're both totally enthralled by the bird feeders. We are having such fun getting to know their personalities and watching them play with each other. For whatever reason, Dasher never lets Santa go to the bathroom alone -- he always wants to stand on top of him as he goes, which cracks us up!

Dasher recently met the Hairy Woodpecker in the window feeder and his eyes got so big I thought they'd pop out of his head! Ha! Most of the birds that frequent the window feeder are much smaller so he was quite surprised when that guy landed.