​Kingdom Animal Shelter has had a wonderful time over the past months...checking in on our volunteer fosters, and even accepting applications for adoptions, processing those, and meeting with the applicants using Zoom.  It has been surprisingly delightful and illuminating to try to figure out new ways for our Shelter to carry on, rather than just sit idly by, twiddling our thumbs, waiting for the right time to reopen to the public.

Following are some of the stories of our foster cats, or our new foster-to-adopt program, which in some cases had led to their being adopted.  When an applicant is approved on paper, we then meet them via Zoom.  If they look very positive, we make arrangements for the approved applicant to take the cat home, and see how it goes.  We then check again in two weeks or so, to see if they want to tie the knot.  So far, all have wanted to.
​
Here are their various stories, in their own words, with some very sweet photos.
​ 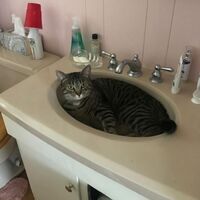 When Helen brought Sparky in a cat carrier, the first thing we saw was her beautiful eyes: fearful but curious. We brought the carrier upstairs to a quiet and safe guest room. We greeted Sparky as our guest, somebody we didn’t know but wanted to accommodate. 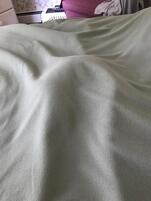 We thought she would hide under the big chair but instead she climbed under the heavy covers of the bed, and turned for a few days into a breathing big lump. Sparky ate and used her litter only at night. Then her curiosity took over, and Sparky started to peek her cute nose in our direction.  It was funny to watch her body moving like a careful boat towards the shore (end of the bed), making waves under the covers, smelling the air, getting used to her new company.

During the day my husband and I would humbly come to pay visits. We would carefully lie down at the opposite corners of the bed, and Sparky would come out to sit between us, purring loudly her opera aria. It was very touching that Sparky was always making sure that we equally received her affection. During the next week we would come and play and nurture our fresh friendship.

Then, when Sparky felt totally safe with us, she started exploring our house, slowly and mindfully. There were periods when she would feel overwhelmed and decide to go back to her safe room. But it didn’t last very long. 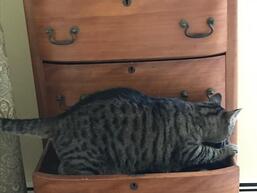 Now Sparky knows all the corners of our house, probably better than we do. Her favorite thing is to sit at the window, as if it is a National Geographic channel, and watch birds, chipmunks and squirrels. Sometimes she reacts with all her body, and sometimes she dozes as we all do when we watch TV. She is funny and playful but also very strong willed. She knows what she wants.  And though she sometimes loves to come and let us pet her, it is always she who decides. When we are in the mood to pet her, which we should admit happens very often, she may just politely decline. But Sparky is always there for us. She might not let us frivolously touch her but she is a part of our household, paying the same attention to what we are doing and what is our mood, as we do.

We offered her a safe place and she offered us the cat’s wisdom how to relax while being alert, how to be in tune with your body, how to know your barriers, how to respect what is happening right now, how to be always elegant no matter playful, moody or sleepy.
​ 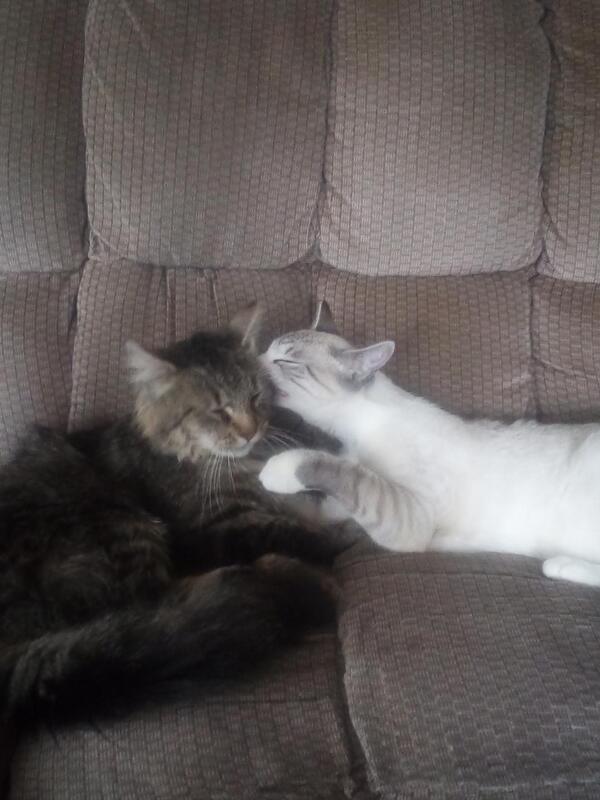 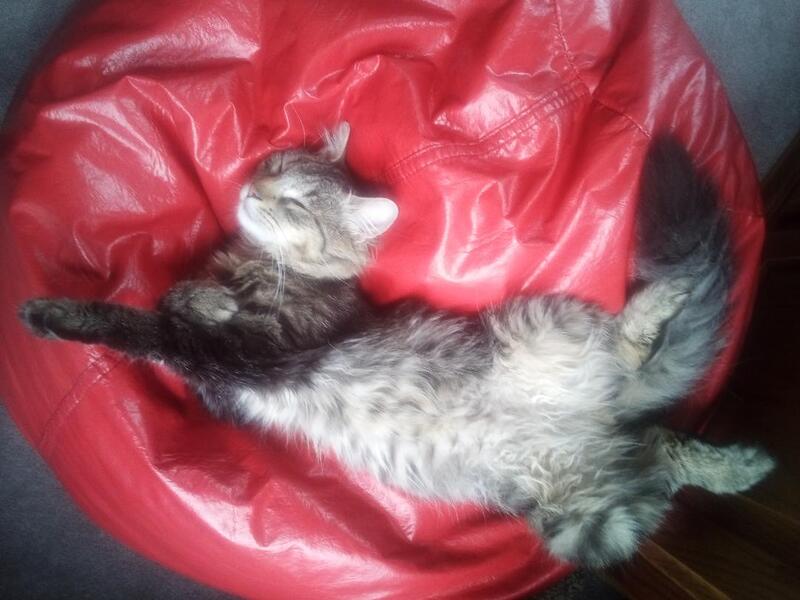 ​Sherwin - Available for Adoption
Fostered by the Tucker Family

We were new to this fostering role as Covid-19 kept us all inside.  We had had a great time with Jordy in our home. We are thrilled that he has since found a wonderful forever home. Upon saying goodbye to Jordy, we quickly transitioned to inviting Sherwin here.

Two initial observations we had about Sherwin were first, his cute vocal way of socializing that filled up the quiet left after having gotten used to Jordy's happy chortle.  The second observation was that this fluffy guy loves attention.  Our ten year old son, Grant, was getting attached very quickly and I kept hearing comments from him trying to figure out if Wart (you'll remember him as Goldsworthy) or if Sherwin was the best kitty.  Salem finally settled this by saying that they are both the best, but Wart is the best cat we get to keep.  The more Sherwin and Wart have played together, their tussles although friendly, seem to be escalating in intensity.  It's starting to have our older cat, Delfi, just watching in the distance and shaking her head at the two young rascals.  But Delfi thinks she's queen of the house and they are mostly just annoying boys to her.

​Sherwin had no problems with the change of moving in here.  Hopefully his final vet clinic appointments will have him ready to be a wonderful addition to someone's lucky home soon.
​ 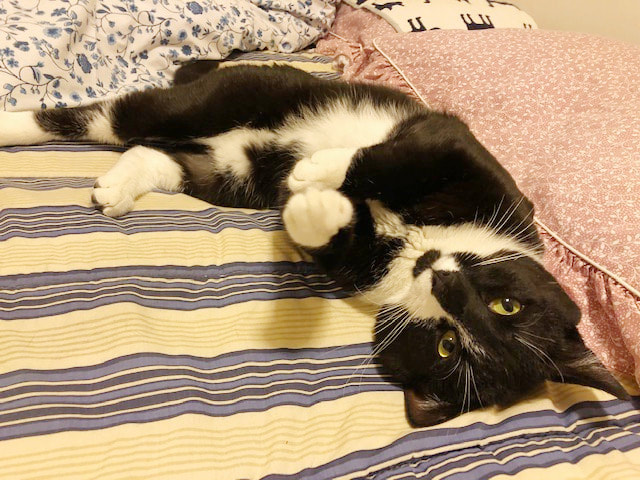 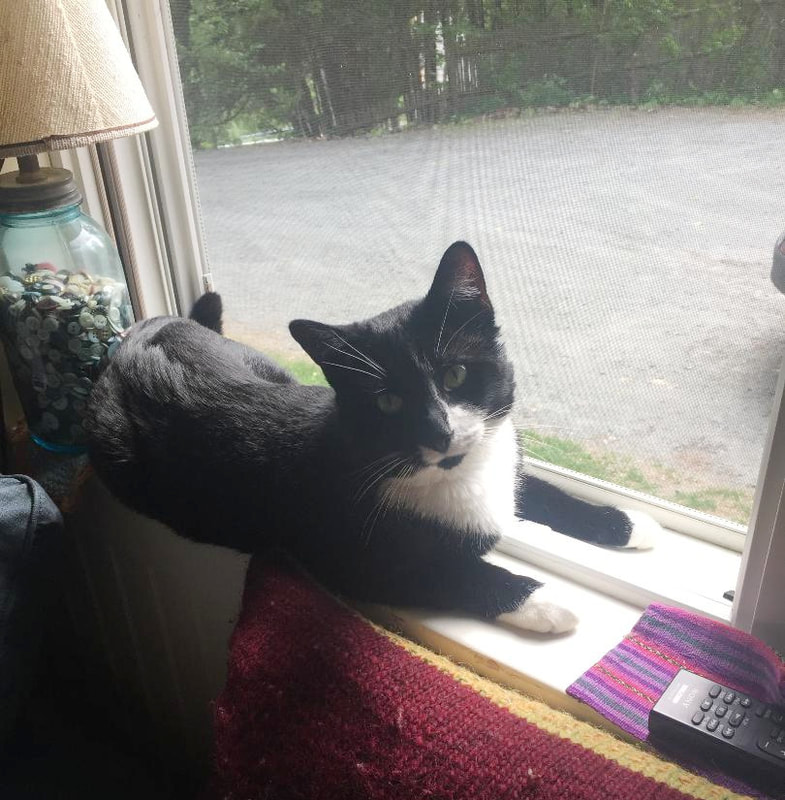 Mittens has been a wonderful addition to our family.  We are so grateful to the staff at the Kingdom Animal Shelter for helping to make the adoption happen, with great care, during this pandemic.  Most animal adoptions don’t begin with a Zoom conference, but ours did, and included Mittens!  The paperwork and background checks were done very efficiently and we are so happy to care for this personable, playful pet.  Mittens seems to enjoy being nearby to us, often napping at my feet or at the end of the couch.  He has taken up residence on our sunny windowsill where he enjoys watching the birds and chipmunks scurry by.  Also loves the occasional mad dash through the house chasing one of his toys.

Much thanks for the caring foster family and Kingdom Animal Shelter staff!
​ 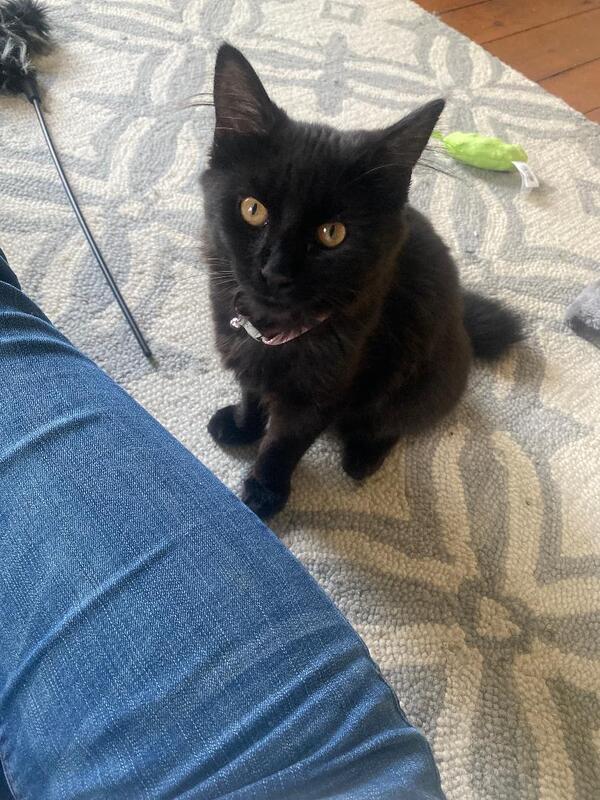 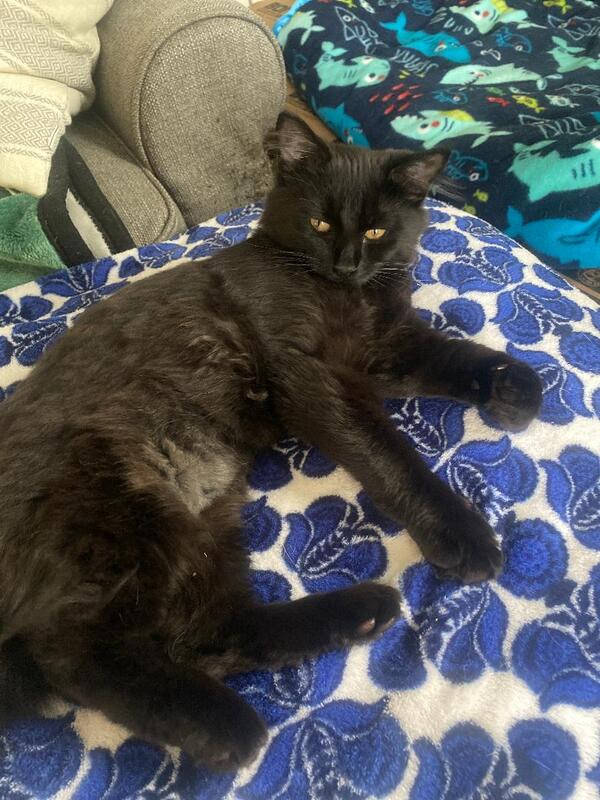 Abigail
Fostered by Julie Hall
Foster to adopt with Logan Smith and her cat, Lil - went home May 30

Abigail wasn’t happy in the car on the way home.  She is exploring her room. ​ Abigail hides when they enter the room but after a couple of minutes she comes right out. Logan said that they played with her until they went to bed last night and they are pretty sure that she slept through the night. Today she has been very playful. Logan plans to send a video.  Logan said that her outgoing personality is already showing.
​ 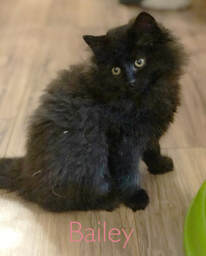 The ride home was good. She did not get sick and meowed a few times but she did great. She jumped out of her carrier right away and took a little while to warm up. She is the sweetest kitten and is so gentle. Love her already!
​ 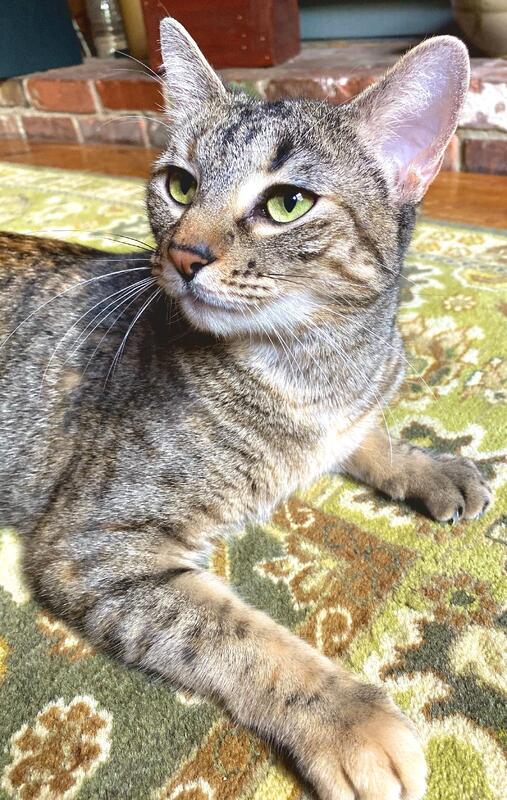 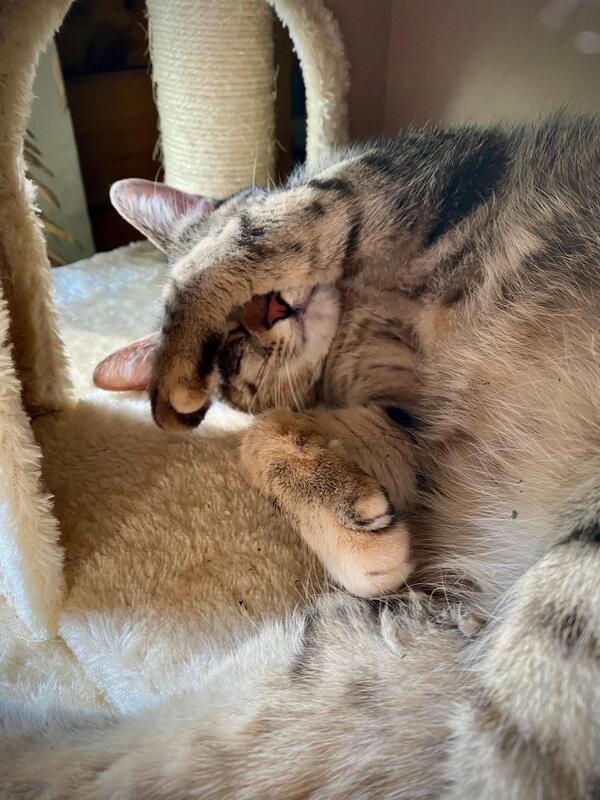 Morag says that Karma Rebecca is doing very well and settling in quite nicely. She now has access to the entire house and loves to explore. She is getting used to Onyx and seems comfortable when Onyx is sleeping or laying still. Just today, they were nose to nose. Morag said she is not sure who was more nervous-Onyx or Karma Rebecca. Her favorite spot to sleep during the day now is on one of the dining room chairs, covered up by the table cloth.

Each night, Karma Rebecca sleeps with Morag. Karma Rebecca seems to tidy up her toys at night and brings a mouse (toy mouse thankfully) to bed with her each night. Karma Rebecca loves to watch the birds and chipmunks from the open windows of the home. Karma Rebecca has a nice cat tower also. She absolutely adores fresh catnip. Morag is growing catnip for Karma Rebecca and cut a sprig for her the other day. Karma Rebecca went crazy! She went rolling and rubbing on the catnip and loved it! Some of her favorite toys are a feather on a string, bells with balls, fluffy mice, a wine cork, and a table tennis ball. Morag thinks she would make a great goalie. 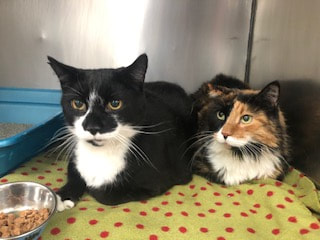 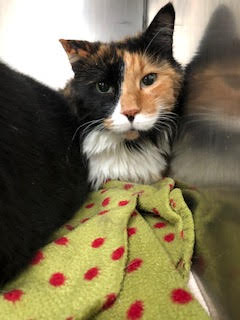 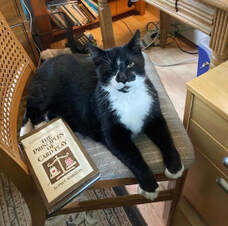 ​
All is right in the cat world over here....Keiki decided it was all right to come out from under wherever she was and join the fray....Jack has taken a fancy to Allan and his office....which is sweet...He (Allan) took attached picture...So that's all the news from us and the kitties...they are so sweet ...Thanks for taking such good care of them..
​ 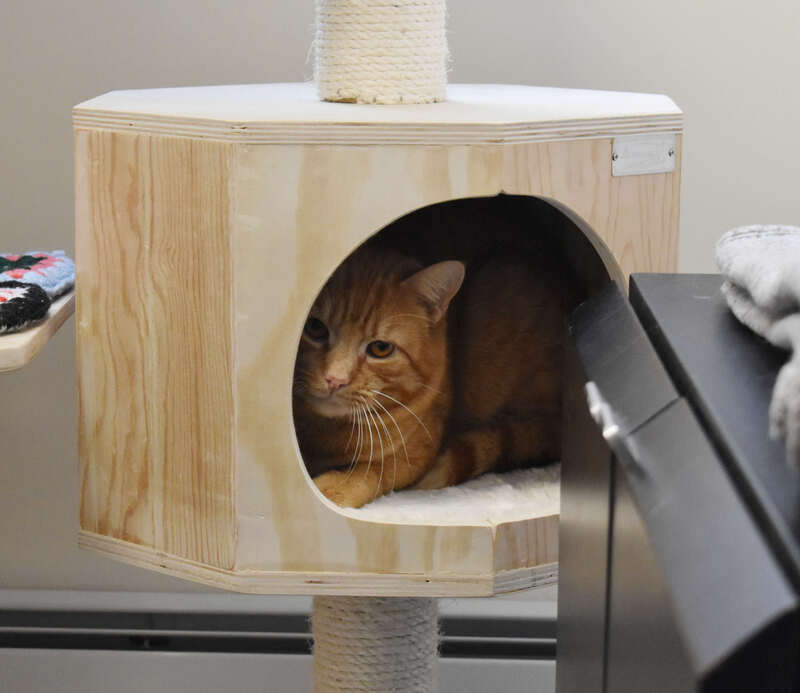 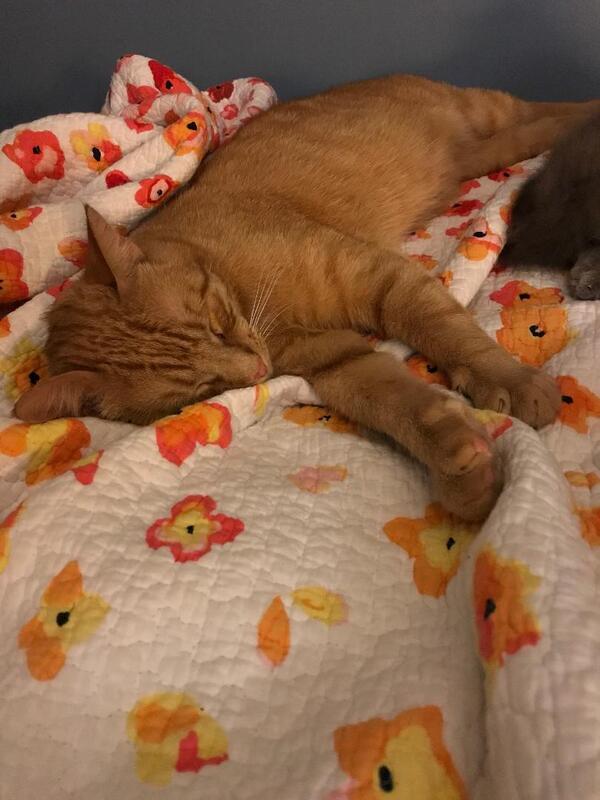 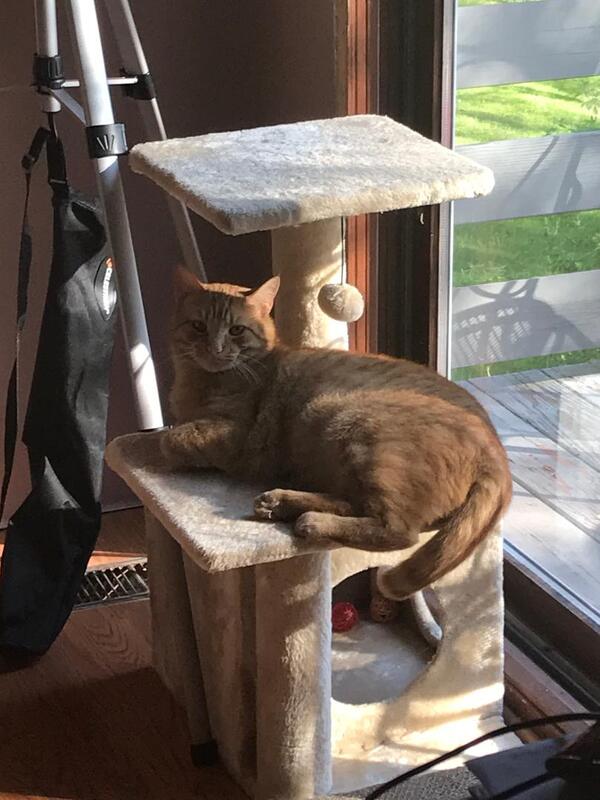 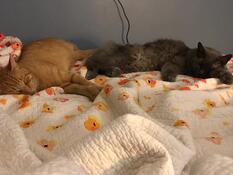 
COVID-19 made adopting a cat a little tricky. We never met Jordy before he moved in with us. We had been looking for a companion for our 12-year-old furry friend Wolfgang when we came across Jordy online. Wolfgang’s previous cat friend had passed away earlier in the year at the age of 19. Being the social butterfly that he is (with not only people but other cats too), we knew we’d be looking for another cat, especially for his benefit. The first thing that caught our eye about Jordy was how much he loved other cats, just like our buddy Wolfgang.

It was only after inquiring about adoption that we learned of Jordy’s mistrust of people. We were warned that he may never be particularly social with us, that how he would adjust to our home was not predictable. We decided to proceed with the adoption process anyway. Even if Jordy never let us pet him or cuddle him, it wouldn’t matter as long as our current cat and he could be happy together.

The first week after Jordy arrived played out as expected. He hid from us as much as possible, only coming out for food. Luckily, introducing him to Wolfgang went well. When we finally gave them shared access to the whole house they instantly became friends. We believe it’s Jordy’s observation of Wolfgang that has allowed him to make the progress with us we didn’t even know he was capable of.
​
The first time he was comfortable enough to play, it was as if he would never stop. The first pets that he allowed from us led to more and more; he can’t get enough! Jordy no longer hides, but positions himself in plain sight no matter what he’s doing. We had only hoped that our kitty would gain a companion, but with Jordy we’ve gained so much more than that. We are so happy to welcome him into our family. 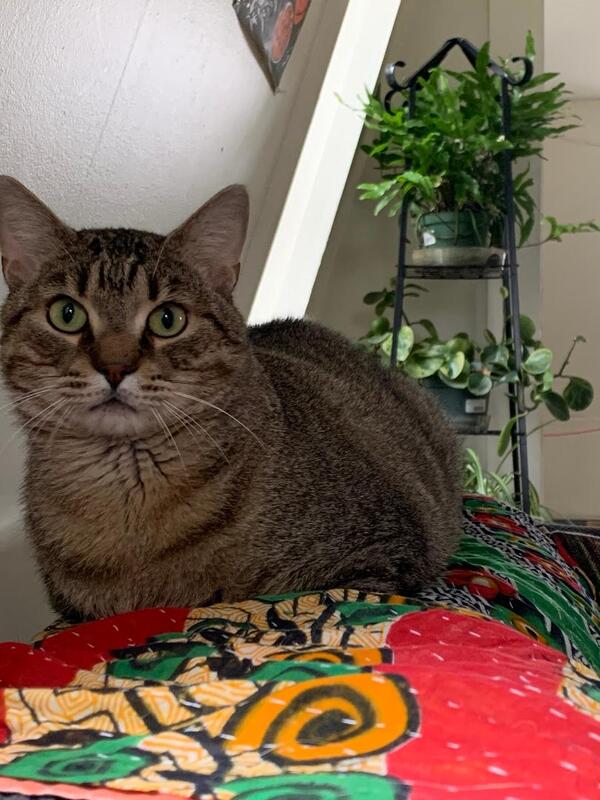 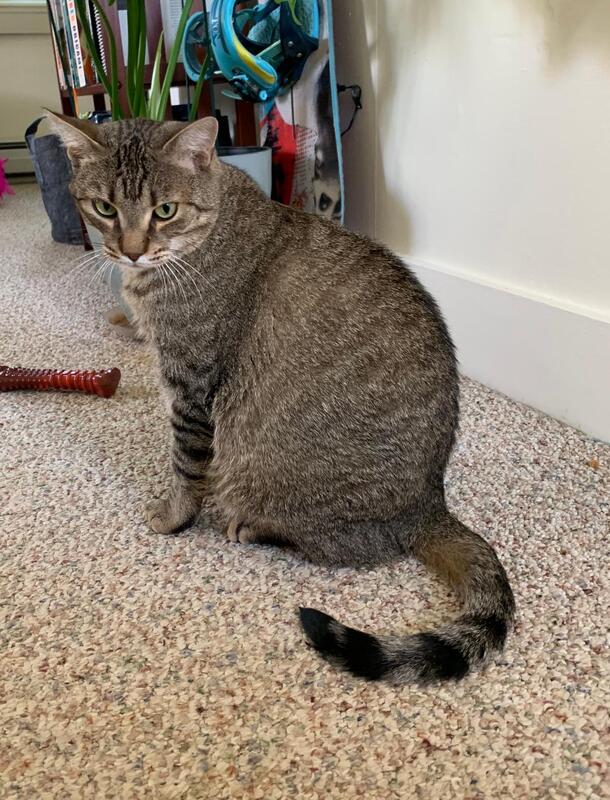 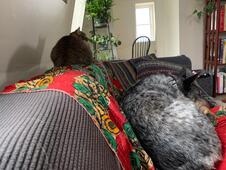 Skittles is doing great in his new home! He loves to sit on the window sills in the sunshine, face rubs, and playing with his pink feather toy. He and the dog have reached a peaceful understanding, shown through their willingness to sit on the couch together. If I sit in the middle, they like that best so that they each get lots of pets.