We have a number of cats in foster, long term.  They are there because they have some challenging issues.  We are so grateful to our long-term fosters who are willing to take on their care and welcome them into their home. 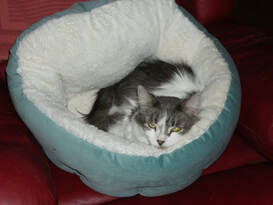 Obi
Obi is a beautiful 3 year old grey and white feline boy with one of the fluffiest tails ever. He and five other sibling kittens were found in a nearby trailer park, holed up under a dumpster, trying to avoid dogs that were after them.  The kittens were snarfed up and brought into our Shelter.  When Obi reached about 3 months old, it became clear that his colon wasn’t working properly.  The nerves weren’t functioning and he couldn’t defecate on his own.  We took him to Peak for a consultation.  We batted around the idea of removing the colon and bringing the small intestine down along with its nerves.  It works well with adult cats with megacolons.  But they hadn’t done it with kittens before.  Our local vet suggested we try a specific food, along with Miralax, and a special medicine, Cisapride, which helps peristalsis.  It worked!!!  He can be quite messy at times with his bathroom habits...and takes very careful monitoring so his plumbing keeps working.  And some of his meds and food are not inexpensive.  But he is a wonderful, loving, mischievous , playful, gorgeous boy...and his human foster and his foster feline family love him.
Foster: Helen Morrison 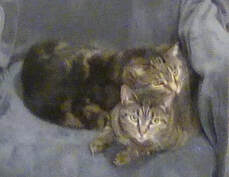 ​Mickey and Susie Q
Mickey (10+ years) and Susie Q (3+ years) are a bonded pair and Mickey’s age might make them a bit harder to adopt. Their previous caretaker had passed unexpectedly and they seemed to mourn this loss for quite a while.  In the shelter, Mickey was withdrawn and easily spooked.  Susie seemed a bit more social.  When all the cats were being sent into foster care, we asked to foster Mickey and Susie Q.  They moved into our finished basement and it didn’t take long for Susie to claim the large, ground-level window as her favorite spot.  Lots of birds, chipmunks, squirrels, and even the odd neighborhood cat would wander close by the window.  Mickey was a little warier of a new environment but warmed up to us about a week later.  We have noticed with the recent storms, that Mickey is afraid of thunder, but Susie is not and is often seen comforting Mickey during and after a storm.  They’ve been in our care for over 3 months and are doing well.
An interesting thing about Mickey… I’ve been trying for the past 2 months to see if he could be a lap cat.  He usually sat beside me but never on my lap (at least not without treats).  Well, on the morning of June 29, without any treats, he got on my lap and lay there for 10 minutes.  I was excited and had Tracy take pictures.
An interesting thing about Susie Q… I think she would be a great hunter if a window wasn’t between her and whatever critter is just outside.  It’s funny to watch her butt wiggle in anticipation of a pounce that never comes.
Fosters:  Christine and Tracy McIntyre 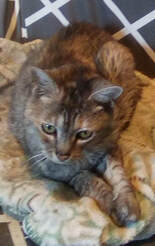 Zola
Zola is a “delicate flower”, according to the vet.  She has hyperthyroid and arthritis that she is being treated for, plus maybe signs of early kidney problems.  Add her age (maybe 8-12+ years) and she would be harder to adopt.  We were asked to foster her because she was not doing well in the shelter.  Just before we were to pick her up, she had a stroke and spent about a week with the vet.  When she was stable enough to come to our home, she didn’t look like she’d last a week, but a stroke in a cat is different than a stroke in a human... she recovered in less than a month with only a few lingering signs.  Because of the stroke, she doesn’t groom herself like a normal cat, so we brush her daily and have more in-depth grooming about once a week. She’s been in our care for 9+ months and is doing well.
An interesting thing about Zola… If she feels like we’re ignoring her (or she wants attention), she’ll go to an empty room and start yowling.  Then when she hears us or sees us approaching, she’ll trill or meow quietly.
Fosters:  Christine and Tracy McIntyre 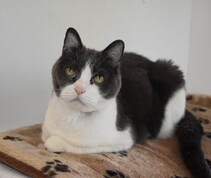 Sven
As some of you may remember, Sven came to KAS several years ago.  He had been found by a young couple on a Sunday afternoon, lying inert on their lawn.  They took him in for the night, not expecting him to make it through.  In the morning, they took him to the vet.  Western Avenue Vet Clinic worked with Sven and brought him to what we thought was a good, healthy state, ready for adoption.  Sven was alert and so friendly, getting along with all the volunteers and resident cats alike.  Everyone loved him.  Then one day we noticed that he was breathing very hard.  After many visits to LAVES and our own vet and even Peak Veterinary Specialists, it was determined that Sven was in progressive heart failure.  This threat was compounded by an acute attack of the herpes virus.  But with good meds and good care, Sven is in excellent condition at this point.  He is being fostered, long-term, by Caleb Stone, a Board member, and his partner, Nikki Lefebvre.  Here is an update from his fosters:

Sven had a vet checkup recently at Western Ave and he is doing very well.  He even gained a pound since his last visit.  He is also being slowly introduced to our other animals (Goose the cat and Booger the dog mostly).  Goose and Booger have been very calm around Sven and Goose even groomed Sven a little bit one day.  The plan is just to do this for short times to not stress Sven out considering his feline herpes and heart condition.  He normally decides he has had enough of them after about 10 minutes, but he does seem to enjoy the excitement for a short while.
Fosters: Caleb Stone and Nikki Lefebvre 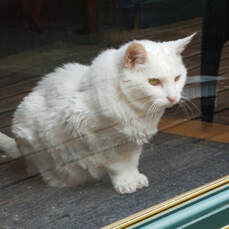 Yuki
After 20 months sharing space in the old ladies home on Burke Mountain, Princess Yuki and Ginny are hanging in there. They share many of the same advanced age-related ailments. In 9 month of isolation, listening to Talking Books, watching news broadcasts while Yuki is lap sitting.
On October 13, 2019, Ginny was forced to give up driving, so Yuki was delighted to have her home most of the time-more lap sits, more brushing between naps. Then in March 2020 COVID 19 really isolated us and still is. Fortunately we have lots of windows to look out and many classical music stations provided by Amazon’s Alexa.

Never having shown any interest in toys, Yuki never entertains herself. Until the virus arrived, Yuki's only vocalizations were soft hums as she wrapped herself around Ginny's  ankles. Then all of a sudden, Yuki found her voice. Yowls, Scolding, Angry sounds. If Ginny doesn't follow Yuki with unfinished breakfast onto the cot in the office, then Yuki will yowl. If Ginny goes outside to weed the garden, Yuki will howl. It seems as though Yuki may be getting some dementia.

Ginny and Yuki appreciate each other's company. It is especially nice that Yuki is white, because with Ginny's failing vision,  she is easy to see. Ginny and Yuki love each other and are great company for one another.
(Foster:  Ginny Elliott)