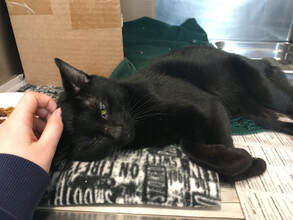 
On a frigid day in February in Boston, a good Samaritan found a cat laying on the sidewalk, minimally responsive. They rushed it to Angell Animal Medical Center, a large emergency and referral animal hospital that is associated with the MSPCA animal shelter. That means that Angell is able to see stray animals through the veterinary hospital, then adopt them out through the shelter. On presentation to Angell, the cat was dull, dehydrated, very skinny, and had a temperature of 93 degrees Fahrenheit (the normal temperature of a cat is 100 – 102.5). The ER team worked quickly to warm him to the appropriate temperature and give him fluids to rehydrate. After he was stabilized, he was still pretty dull, but the hope was that as he started to feel better, he would become more alert and begin eating. When I came in to work the next day, he was one of my patients.

I started working at Angell as a veterinary technician/nurse a little over two years ago. When I was younger, I volunteered at Kingdom Animal Shelter doing morning duty on Sunday mornings with my parents. When I moved out of state I still wanted to volunteer at KAS, so I currently help maintain the website and put together the monthly newsletters.

When I first saw the stray cat, I was struck by how skinny he was. Rubbing my hand over his back I could feel every rib and vertebra. He had bad dandruff, likely due to not having had good nutrition. He had pressure sores on the back of his legs. He hadn’t yet eaten, wasn’t moving around a lot, and looked pretty sad overall. During the night he had passed a weird rubber foreign body. The thought was that before he became very ill, he was so hungry he was eating anything, even if it wasn’t food. Cats can easily get small things stuck in their intestines, so we were lucky that he passed the foreign body without needing surgery. Since he wasn’t eating yet, my main goal was to try and get him to eat something. I put a small amount of wet food on my finger and held it up to his face. He sniffed the food, and instead of eating it, rubbed his face on my finger, smearing food all over the side of his face. Even though he didn’t feel well he was still very sweet and just wanted attention and pets. At that point I wasn’t looking for a cat to bring home, but I thought to myself that he may be a great cat for me. After sitting with him for a while he started to eat small amounts of food. The shelter took over his care shortly after. They weren’t sure if he would recover, but slowly over the next couple of weeks he started to eat more and gain weight. I kept in contact with the shelter, visited him multiple times, and brought him home two weeks after he was initially found. I named him Bagheera, for the panther in The Jungle Book. 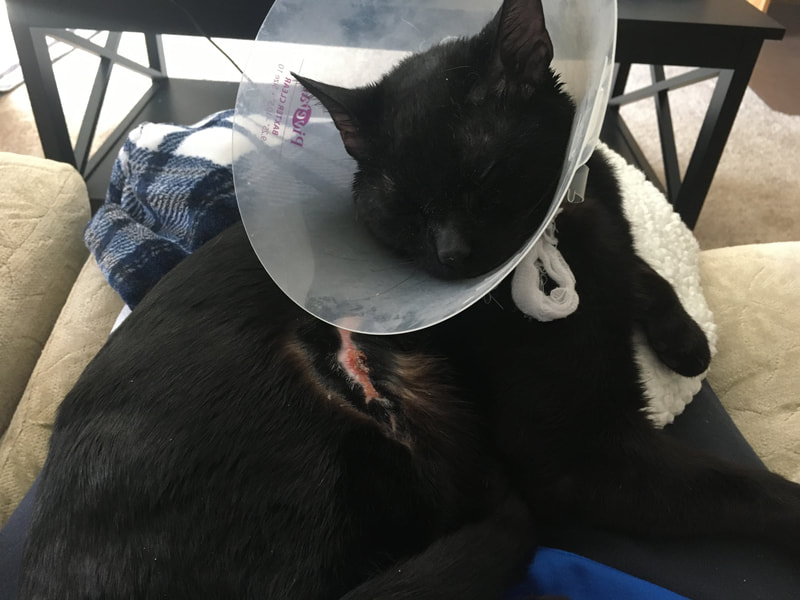 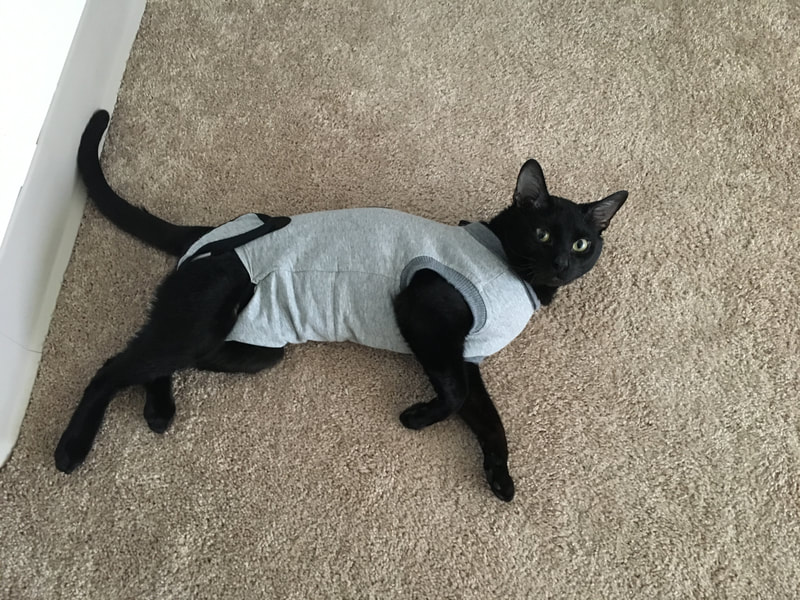 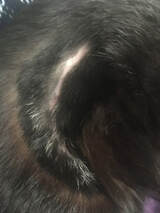 The healed burn
During his time at the shelter, Bagheera started to develop some hair loss on his right flank. At first the doctors were unsure of what it could be. However, over the next couple days he began to lose more hair and the wound started to look like a burn. We are unsure how he was burned, but it likely occurred shortly before he was brought into Angell. He may have burned himself trying to find a warm place to be, like in a car engine. Unfortunately, it is common for cats to become severely injured when they seek refuge in the engine compartment of a car and the car is turned on. Bagheera’s burn luckily wasn’t too severe. I applied a special ointment to the burn twice a day. Bagheera would try lick at the burn, so he had to wear an e-collar. Wearing the e-collar lead to him developing an ear infection. The stress of it also caused him to overgroom his arms, leading to hair loss. I tried having him wear a surgery suit instead of the e-collar to cover the burn while it was healing, but he wasn’t too pleased with that. He ultimately had to wear the e-collar for about two months until his burn fully healed. Now, most of the hair has grown back, though it is white instead of black, and he has a large scar that doesn’t cause him any issues. 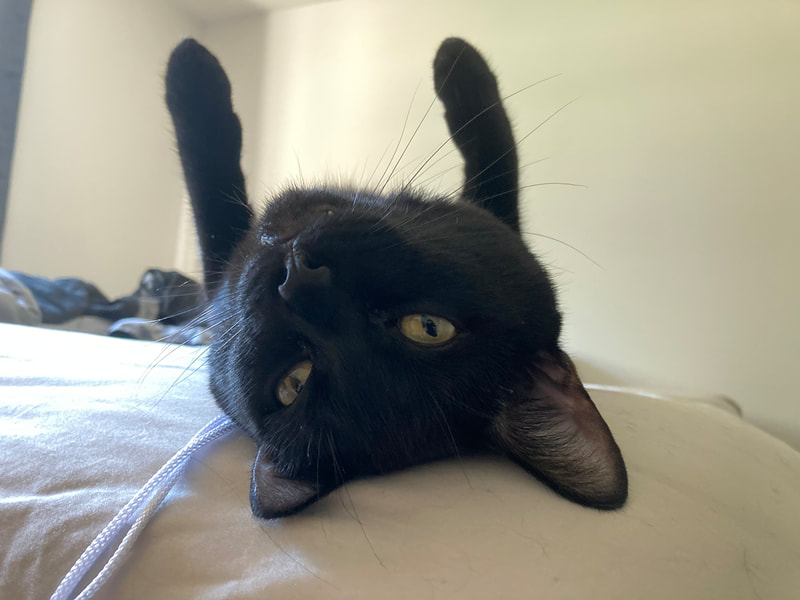 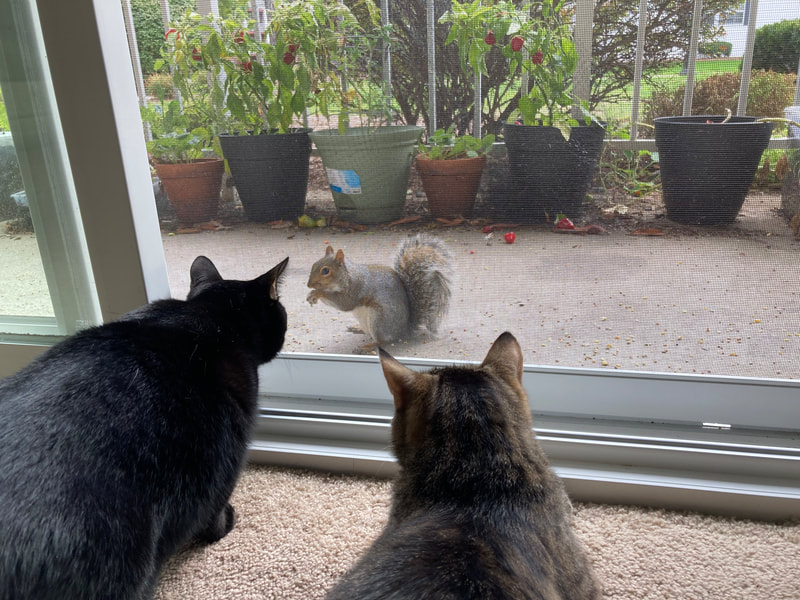 ​With a high-quality cat food his dandruff went away and he has a sleek black coat. He is a very friendly cat who greets me at the door at the end of my long shifts. As I write this he is curled up on my lap. He enjoys playing and cuddling with my other cat, Tory, a KAS rescue. He loves sprawling out in the sun and watching the squirrels and birds out my window. My job as a veterinary technician can be difficult, but being able to help animals like Bagheera is what makes it all worth it. ​