Where Did Summerville Go? 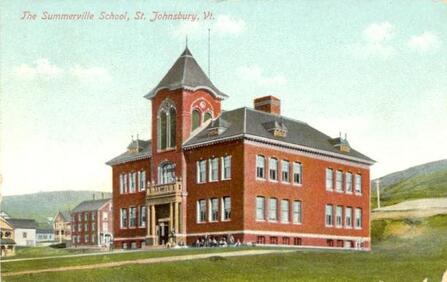 ​​Where Did Summerville Go?
-Rod Lauman

​
Once upon a time in a place not so very far away there was a nice village named Summerville. Its name went away, but the place is still there. All of the land East of the Passumpsic River was a separate village in the Town of St. Johnsbury called Summerville. In the 1870's and on, this was a bustling village with its own industry and not as dependent on E&T Fairbanks and Co. as the rest of St.Johnsbury was. The Ely Fork & Hoe Company which made tools and implements was a big employer in the village. There was a big lumberyard all around the plant.  You can still see the smokestack and remains of the building behind the old East End Market building near the light on Portland St. In later days, this was bought out and called True Temper.

The Portland & Ogdensburg Railroad cut through the heart of Summerville on its way through Crawford Notch and on to Portland, Maine. A wooden covered bridge that took the trains from the station in St. Johnsbury over to Summerville was intentionally burned in the 1927 flood in an attempt to save the road bridge next to it. That failed and both bridges were lost. This later became the Mountain Division of the Maine Central Railroad. The tracks are still there although long abandoned.

Summerville had its own school, which still stands on Portland St. and is now called the Cornerstone School and is still in use. It had its own Post Office and several stores. Across Weeks Ct from what is now St. Johnsbury Animal Hospital was Weeks General Store. When you go by you can tell it was once a store,even though now somebody's home. The Boomer Block had many businesses and was down underneath the Portland St. Bridge. There was a tavern there for many years with mirrors covering the walls. That closed and another very dark saloon (The Drawing Room) opened there. A fire destroyed the building from a cigarette not put out properly.

Summerville existed no more after 1910 when it lost its own village designation and became a part of St. Johnsbury proper. Maple Grove moved over to Summerville from Western Avenue and grew to be a company known worldwide for its maple products.

And on the outskirts of what was once Summerville, at 1161 Portland Street, is now a place called Kingdom Animal Shelter. That building was built in 1970 as a regional office for Prudential Insurance. It remained that for many years and then in later years became the offices of RCT for a time. After a period of time with the building closed and up for sale, it was donated by Julie and Peter Murphy to KAS for the shelter.

And so now you know where Summerville was...and still is, minus its name but including its new addition of Kingdom Animal Shelter. There was a building that stood on the property back in the Summerville days of which part of the foundation is still there. I have heard that it was also a maple products producing building, so I am currently doing some research on it to see what it was and what it was called.