It Was a Dark and Stormy Night ... 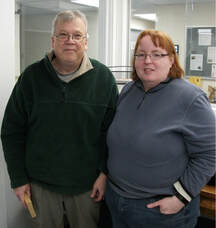 Not only was it a dark and stormy night on Saturday, Jan. 18, but it was predicted to be a dark and stormy weekend with high winds and 15-20 inches of snow, on into Monday. What to do about tending to the cats at the Shelter? The regular volunteers scheduled for Sunday morning lived far away. Could they even get there? So, we made plans for three volunteers who live in town to come in Sunday morning, if they could, to feed and clean and tend to the cats and kittens. But what if even they couldn’t get in? Tracy and Christine McIntyre to the rescue!! 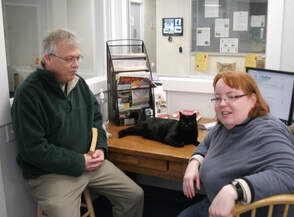 Tracy suggested to Christine that they come in and do their normal Saturday night tuck in (with new volunteers, Caleb Stone and Nicole Lefebvre) and that they just bring their sleeping bags and air mattresses and food to tide them over. It made total sense to just settle the care of the cats before the storm got out of control. Christine was a little dubious at first...but then decided that an evening/night with Cleopatra would be just wonderful. 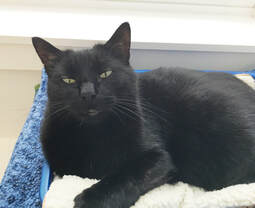 Christine and Tracy came around 5 p.m….sleepover gear in hand. Apparently they had enough food and gear for three days, just in case. The Tuck In group got the cats all tended to for the night. Then Tracy and Christine set up their air mattresses and sleeping bags in the conference room. They were “Boy Scout ready”. Some good fairy sent over a pizza from Dominos. The delivery guy was apparently quite amused at these two staying over for the night to tend to the cats.
Christine and Tracy let Cleopatra out (she is the Queen, of course). And as was typical, they turned in at about 9 p.m….lights out. Cleopatra was in Heaven. She walked all over them, purring the entire time, settled in between them to snooze...again purring away. Any movement, she’d be up and walking all over them and then settling in between them again. As Christine said, Cleopatra must have been able to sleep with her humans in a former life.
​       Wake up time (aside from the kittens racing around and making noise in their colony room in the middle of the night) was between 5 and 6 a.m. Brielle wanted her breakfast, as did everyone else. Kitties got fed. Christine and Tracy had their granola breakfast...and then settled in to do morning duty. Some time around noon, Jennifer Smith came over to dig their car out of the drift that almost completely covered it. Tracy and Christine finished morning duty at about 1 p.m. Tracy hadn’t done morning before, only tuck in and adoptions. He was most impressed with how thorough we are, how well we tend to the cats and take care of them.
When asked if they would stay over again, they said, “absolutely”, if it wasn’t a work night. They would recommend air mattresses, of course. We even talked about maybe having a couple of cots there...for any time volunteers wanted or needed to stay over. It’s a thought…..
So, a big thank you to our 2019 Valentine Volunteer Couple...Christine and Tracy McIntyre...for their absolute commitment to the Kingdom Animal Shelter and the KAS kitties. They are awesome!