Tigers in the Jungle


​Norm Vandall, a retired teacher from Roxbury VT, had turned to KAS in January to find a couple of young, bonded cats, ideally tabby tigers, sweet lap cats preferred. It was a sensitive quest, since Norm hadn’t shared feline companionship for several years due to changing life circumstances. This would be a new chapter in his home life.

KAS had no suitable cat candidates at that time, but Norm soon found a pair of tabby brothers in another Shelter, who were said to be "friendly".

We kept in touch, exchanging experiences and methods of cat de-stressing, taming and gentling.

But after all it became clear that this was a path of self-discovery, like for all of us who truly love cats: Surrendering to the lifestyle of the Tiger, the freshness of being in the present moment, stimulating and uncomfortable as it is; being conditionally loved for food and being unconditionally loved as a fellow untamable being...

"There’s cats!  Two cats. Wild cats. Striped ones, and they’ve taken over my house, at least what I’ve kept accessible to them. Both go underneath, on, over, up, and into anyplace they choose, particularly if they’re suspicious about a mouse miceing around.  After they explore, they lord over the territory, sleeping in good vantage areas where they keep a slitty eye barely open, possessively.  If they had their way, despite the short period of time I’ve know them, they’d have me in the Town Clerk’s Office putting their names on the deed! Not possible yet since I’m behind on the naming thing. Why names? They’d sign with a paw print anyhow. ​

The mousing is more or less continuous, as if they require them for sustenance. I know they’ve succeeded at least twice, but I haven’t found even a tail. Perhaps I’ll be smelling musty mice later on. Such fun, these cats!

I had expected to get two supplicant cats that would sit on my lap whenever requested. “ Pat me, please.” Instead, I got a pair of untamed felines that show more natural instincts than evidence of potential compliance. Now, I’m realizing that I enjoy this much more, these wild critters. Watching them is wonderful fun. I could be in Central America or in an African jungle: The circle of life in my living room.  Sofas are obviously meant to claw up, as are rugs and most vertical surfaces. That behavior will need attention, but these are cats. Note that Pavlov didn’t try getting them to salivate, and stimulus/response learning may not be their style. If you know cats, then I’m not springing any surprises on you. Deep down, most cats think human are fools. 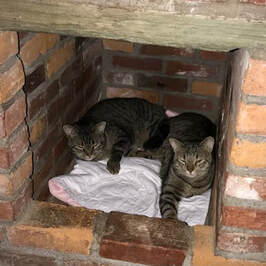 I try to keep them interested in food since treats are a way to endear them to me. They will both jump up on the bed where I hand-feed them tasty treats. Food alleviates fear and suspicion, I guess. The little one sunk his teeth into my index finger while ineptly biting a tidbit out or my pinch-fingered hand.  Human blood ran out, and I’m thinking that maybe this could make them man-eaters? Hope not.  You know, blood in shark waters? Watch out! I even get to pat (pet & pat are both correct) them a small bit during this munching transaction. So, little by little, cat steps at a time, I’m taming them up. Pretty soon, it’ll be jumping through flaming rings! Deafening roars!

I can’t tell if running away from me is habitual or fear generated. I surmise that given time, they’ll be less squeamish about sharing spaces with the guy who used to be the boss. It’s already happening. I can sit in the room while they sleep on adjacent sofas or chairs. I no longer need to use a game camera to see both at the same time, especially at snack time on the bed. Take what you can get in this endeavor. I'm learning.

On the plus side, in addition to the companionship they give me, the spectator sport,  they use the litter box unfailingly. They are expressive and are typically making all sorts of catsy noises: purrs, squeaks, chirps and growls. Meows too, of course.  All in all, I’m elated that I got them. It gives me a continuous challenge, but I may be becoming more of a cat than they are morphing into humans." ​