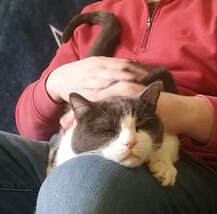 It is with great respect and love that I write about the passing of two of our foster kitties.
Sven was a much older boy who came to us several years ago.  Not long after he came to us we noticed that he had trouble breathing.  After much time at Western Avenue Veterinary Clinic, LAVES, and Peak Veterinary Specialists, it was determined that he had congestive heart failure.  Our very wonderful volunteers, Caleb Stone and Nikki Lefebvre, agreed to take him home as a Hospice kitty.  He was given two weeks to two years to live.  Just short of three years, he passed over the Rainbow Bridge.  Here is a photo of Sven with Caleb and what Caleb shared about his time with Sven.  Because of Sven, the room in their home where Sven spent much of his time will now be Sven’s room.  And Caleb and Nikki wish to devote that room to caring for other cats in need of Hospice. 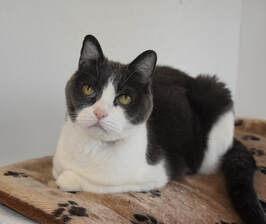 Caleb:  “I said goodbye to my longtime friend "Sven" today.  Sven was a hospice foster for Kingdom Animal Shelter who had many health issues with his heart, kidneys and more.
His remaining life expectancy when he came to live with us was anywhere from 2 months to 2 years.  This was early October of 2019 and after almost 3 years with us he finally crossed the rainbow bridge today in the early afternoon.
Listening to audiobooks with Sven is how I have started and ended almost all of my days for the past 3 years and it is going to be hard getting used to something else.  Together we listened to at least 35-40 books including all of the Harry Potter, Expanse, Lord of the Rings and His Dark Materials series.
He was a great companion and will be sorely missed.  Thank you Kingdom Animal Shelter for sending such an awesome guy to stay with us.”
​ 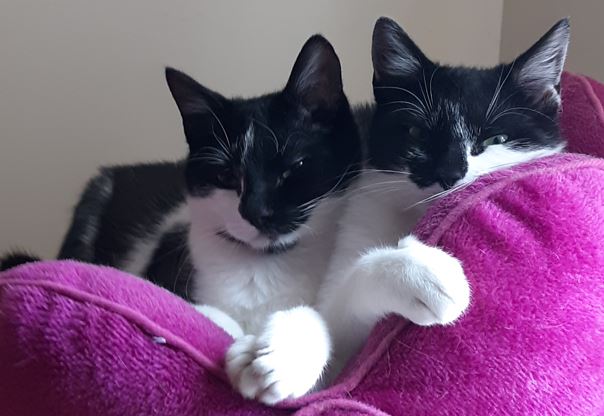 One of our sweet formerly abandoned kitties, Dash, also passed over the Rainbow Bridge on August 29 unexpectedly.  He was only a year old.  He began having trouble breathing and his foster family rushed him to the Shelter for Dr. Sally to tend.  But Dash could not be saved.  It turned out that he, too, had a congenital fatal heart condition.  He was a beautiful boy, funny, sweet, and very bonded to his sister, Dottie.  Dottie is a bit lost without him.  The fosters took the most loving, best care of both Dottie and Dash.  He just had such a major strike against him. He is buried now under a young apple tree at the foster family’s home.