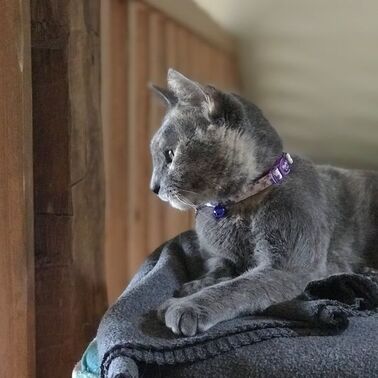 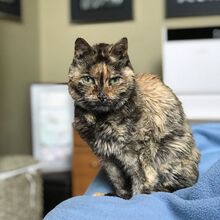 Isis
In memory of Isis and all those precious kitties, who can never be replaced. But others may follow in their paw steps…

A beautiful double-pawed rescue cat called Valentina had given birth to eight healthy kittens in a KAS foster home. She was a wonderful mama and her babies were thriving.  In mid-October we posted their pictures on the Petfinder website for adoptions, while Valentina continued to reside with her foster mom Andrea.

Shy Valentina started to come out of her shell and showed ambitions to become the sweetest lapcat - and the queen of the house!
She adored Andrea and gentle Ula, the pitbull. But, as with many lone strays, who had to fight for survival on the streets, she did not get along well with the other cats in the house. Valentina tried to claim her territory, including Andrea, all for herself and chased after the older cats. It was time to find her a perfect home, where she could relax and be her best self.

Abby from Newport, VT, had eyed little Dolly the tortie kitten on the Petfinder website. Abby was grieving the loss of her sweet, petite tortoiseshell cat Isis, who had died 9 months earlier.

​Adopted as a kitten, Isis had been Abby’s loving shadow for 21 years. Abby was starting to feel open to a new feline friend in her life. Her first impulse was to find a cat just like Isis.
But Dolly was already paired up with her playmate Sasha and was promised to another family.
​ 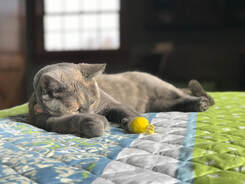 Her mother Valentina, on the other hand, was looking for a great home like Abby’s, without other cats, but with a friendly dog, and two humans to love and play with on her own.
Abby was tentatively open to the idea. She met Valentina in a Zoom meeting with Andrea and decided to adopt Valentina and name her Evie.

Evie had barely settled into her new home when, one day she suddenly had trouble breathing. Abby immediately took her to the vet and was about to hand her over in the parking lot. But loud noises of construction work nearby made Evie panic, wriggle out of Abby’s arms and bolt away into the woods.
Abby was devastated. She emailed KAS to ask for help with finding Evie, and we emailed Andrea about what happened.

Andrea recalls: “It was a dark and stormy night.... after reading the email that Valentina was missing my heart broke. I turned to my dog Ula and said "we're going on a nighttime adventure", got in the car and drove an hour to Newport. Ula and I scanned the parking lot at the veterinary hospital where the cat went missing. It was cold, dark and rainy and construction still going on. I called and called and Ula walked around the parking lot with the tags on her collar jingling, a familiar sound. Then Valentina raced across the parking lot into the woods. Calling and calling, she answered me back and just stayed put. She held on with her big paws and was quickly reunited with her adopted family only a few miles away.” 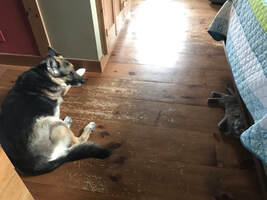 A month later, on November 30th, Abby wrote:
“Evie has been with us 5 weeks now, and it’s hard to believe that she’s already made herself at home, knows her new name and comes running anytime we call. She loves her people, especially my husband, and she likes Hemmy, our German Shepard. Her love of food certainly helped get Evie out of her shell and used to Hemmy.

She’s very talkative, always in the room with one of us, and loving all her mice and homemade cat scratchers. She’s also incredibly smart, impressively gentle, and absolutely loves to play.
It’s been so long since I’ve had an energetic kitty, and I had forgotten how funny they can be when they get into play - she turns into a furry little ninja. Evie has already met her vet and had her nails clipped at the groomer last week - she’s just so sweet with everyone.

Her first week off with us was a rough one - she was sick with aspiration in her lungs and was lost to us for 11 hours on her way to see the vet. Every single day, we are thankful she is here with us.

Evie is helping my heart heal after having lost my furry best friend after 21 years. It was her kitten, Dolly who drew me in as she resembled my little friend, but it was KAS that found me the absolute perfect match, even when I had my doubts and reservations. 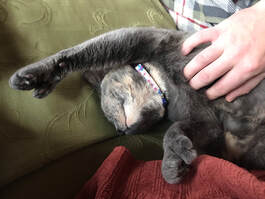 Evie is perfect for us. I am so, so, so very grateful to all the wonderful people at KAS. And Evie’s foster, Andrea, will always have a special place in our hearts for bringing Evie back home to us during that first week. The adorable princess tag on her collar is from idtag.com and has Evie’s name and registration number on it.

Thanks again and hope everyone is staying happy and healthy.”