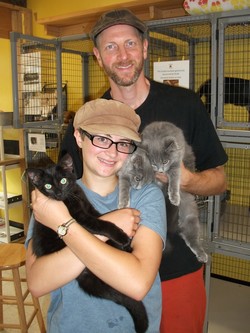 Aurora Gilbert is 14 years old. She just graduated from the Riverside School in Lyndonville and is a freshman at the St. Johnsbury Academy. At the Academy, Aurora is especially
excited about taking Japanese and Spanish, as well as playing violin in the band and participating in soccer. Among her many other interests are Science Club, karate, hiking the Long Trail, and teaching.
Aurora starting volunteering at Kingdom Animal Shelter four and a half years ago, when she
was in the fourth grade. Her mom first brought her in and was so impressed with how clean and
nice the shelter was and how well-cared-for the cats were that they both decided it was the
perfect place to volunteer. As Aurora says, she likes helping and she loves cats...so it was a
good match. She especially likes building a relationship with the cats. She always checks ISO
when she comes in to see if there are any new kitties in there, ready to be tended to until they
find their forever homes. When asked if she has had any special favorites over the years, she
remembered Lola and Mary, and Shadow and Sunshine (now Pitter and Patter). Aurora is
extremely creative and is always thinking of unique ways to help the cats. Before we had hiding
boxes for the kitties, Aurora designed tents from pillow cases that hung from the top of the
condos and the kitties could be in them and feel more secure. They were rather like those
coverings over beds in the tropics to keep out mosquitoes.
Aurora’s Dad, Joel, soon joined in the fun at the Shelter and the Gilbert volunteer team became father and daughter.  Joel has been at the Riverside School for 15 years, teaching science to the upper grades.  Joel went to college to become a veterinarian and majored in animal science.  He loves science because it is a process of figuring things out, answering questions about the world around us in critical and open-minded and creative ways...and he wants to impart the same approach and excitement to the kids. Joel will be teaching science to preschool through grade 8 students this coming year...an interesting and formidable challenge which he is very enthusiastic about.  Joel likes volunteering at KAS because he loves animals and he loves sharing this experience with Aurora.  He is a strong believer in giving back, especially by those who have more than their fair share.
Kingdom Animal Shelter is very lucky to have parent/young volunteer teams. And we are especially lucky to have Aurora and Joel Gilbert. They are dedicated, careful, caring, and full of great ideas.