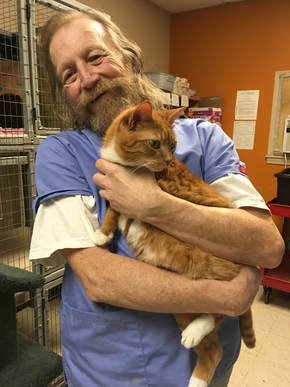 Bob is one of those folks who has an aura of calm around him, like everything is going to be alright. And with the right bandanna on, one could swear we have Willie Nelson volunteering for us. Bob also has a very dry sense of humor which keeps those who work with him smiling.
Bob’s domain is the back room, where he tends to the kitties back there (Rio and Sussex, at the
moment), tends to the kitties in ISO, washes and disinfects all the litter boxes, cleans the
dishes, does the laundry, dries it and folds it perfectly, and puts it all in its proper place. The
back room never looks more organized and clean than when Bob has been there.
Bob began volunteering for Kingdom Animal Shelter in 2015, when the manager of his
apartment, Sandy Butkovich, suggested he look into spending some time there, helping out. He
has been with us ever since. He began with several morning duties and a tuck in...but then
decided on morning duty where he could interact with other volunteers. He calls those he works
with his “littermates” and has a deep respect for them because, as he says, it is like family.
Everyone looks after each other, not only in the shelter, but outside of the shelter as well. If
someone needs help with moving or is having a rough time, others step right up to assist and
support.
Bob brings a very interesting history to his volunteering experience. He has been an ordained UCC minister for 20 years. He has been a mental health counselor, a teacher’s aide for
challenged and challenging kids, and a chaplain in two New York hospitals. Bob has a wonderful
daughter, Elizabeth, of whom he is very proud.
Bob loves the Shelter. It is fun, it gets him up in the morning with something to do that makes a difference. He comes to care for so many of the cats and like many of us, finds it hard
sometimes to see them go...but is also happy for them to finally have a forever home.
Kingdom Animal Shelter is so grateful to Bob for becoming part of the Shelter Family.