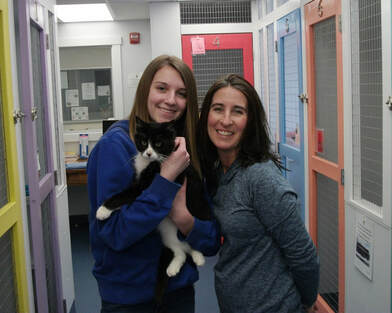 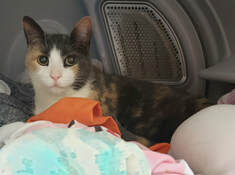 ​      Meet Carrie and Isabelle Priest, mother and daughter volunteers, and their new Shelter feline friend, Darwin.  Carrie and Isabelle have been volunteering for five years at Kingdom Animal Shelter. They are part of a wonderful group, many of which are parents and kids, who do morning duty on the weekends. They began volunteering at KAS because Carrie’s husband’s aunt, Carol Priest, encouraged them to check out KAS when they were looking for volunteer opportunities.  As so often happens when you volunteer at the Shelter, early on, Carrie and Isabelle fell in love with a kitten named Mouse, and adopted her. She is now Callie. She is apparently a bit of a “wild child” but a great cat and they love her. They also recently adopted an Alapaha Blue Bulldog puppy.
Isabelle is a freshman at St. Johnsbury Academy. She is especially into math and the humanities. Her long-term goal, at this point, is to be a vet or a pediatric surgeon. She is also into cheerleading, and plays basketball and softball. She has an older brother, and a younger brother and sister, so the Priest household is a lively one.  At the moment, Carrie is the St. J School data manager. She also has a great time working at Kingdom Taproom, and can be seen with her characteristic very cute hat. Carrie’s career is varied, having done Daycare for 1-2 year old toddlers, worked at the Montessori School in Littleton, taught catechism, and been president of St. J baseball. She likes to bowl, and of course, spends lots of time ferrying her kids to games, theater practice, and other extracurricular activities.
​
Isabelle loves being at the Shelter. Even with her life getting more complicated with the demands of being in High School, she is still very loyal to volunteering at the shelter. She likes giving the cats a daily fresh start...clean, fed, settled in and ready for the day. She relates that it is also rather good to have a time when she is “off the phone”. She likes to take breaks while doing morning duty, so that she can play and interact with the cats. She doesn’t want it to turn into any kind of burden. Some of the cats that have been Isabelle’s favorites are Blade, Nick, Penny, and Goliath.  At the moment, she is very fond of Cleopatra.
Carrie and Isabelle are thrilled with the new Shelter. They love all the space for kitties and people to move around, and for the kitties to find areas to feel comfortable in. We are so appreciative of the care and attention and commitment of Carrie and Isabelle Priest.