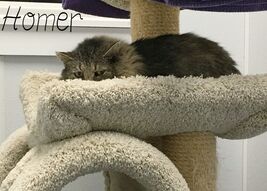 ​​Jane Culver joined the KAS volunteer family in mid-January of 2019.  But that wasn’t her first foray into the wonder of Kingdom Animal Shelter.  In 2014, Jane visited us in our former Shelter in St. Johnsbury Center, and there she fell in love with Troy and Moses, two siblings needing a home.  Troy was a bit of a challenge in terms of adoptions because he had a gum/dental condition known as Stomatitis, which required serious dental surgery to remove all his teeth and dental roots.  But Jane wasn’t daunted and she has given Troy and Moses a loving and wonderful home.  Sadly, Troy passed away about a year ago.  But Moses lives with Jane in total comfort and good care.  Moses is a bit shy when folks come around, but otherwise is very cuddly and happily sleeps with Jane.  He even caught a mouse recently and was very proud of himself

Of course, as often happens in tending to the kitties at the Shelter, Jane fell in love with a particularly shy guy, Homer.  Along with her morning duties, she found herself spending more and more time with Homer, lying on the floor with him in the Meet and Greet Room, talking to him, tantalizing him with bits of sardines.  And eventually he would eat out of her hand and even began letting her pet him around his neck.  And surprise of surprises, he began to purr for her.  We asked Jane if she would foster Homer and work with him.  We brought him over to her house and set him up in his own special room (with a window!).  And slowly and patiently Jane has been working with him.  He comes out now and patiently waits for his food.  He allows more and more petting and gives his approval with loud purrs.  And the two of them have slow blink festivals, a sign of Homer’s growing trust and relaxation.  Finally, we decided to ask Jane if she would like to adopt Homer...and she responded with a resounding “yes!”.  Homer could not have a better home, where he will get all the time he needs to become his best and trusting cat self.

Jane came to the area via Massachusetts and then New York State...and then to Montpelier in 2000..and finally to East St. Johnsbury in 2012.  She has 3 daughters, one of whom works at NVRH, and five granddaughters, ranging from 15 years old to 4 year old twins.  For a time Jane worked at Woodbury College in financial aid.  She then went on to train as a massage therapist.  In addition, she began to work for the State of Vermont as a Quality Control assistant in keeping track of and maintaining oversight in the Traumatic Brain Injury program.  Several years ago, Jane retired and now loves read, to garden, watch PBS shows (Downton Abbey anyone?).  Some of her family lives in England and on her travels there, she delights in visits to Manor Houses and English gardens. 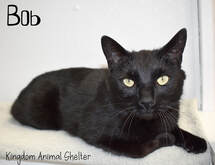 Jane totally enjoys volunteering at KAS.  It makes her feel useful, of course, but she also loves the cats, learning about their little quirks.  For instance, there is Bob, with no tail, who crawls up onto your shoulders like a shawl and purrs away and drools during his petting ecstasy.

​
​And Jane is particularly drawn to those special needs cats...like Abbey, who is a 14 year old girl, and like Pearl, also 14 years old...both very sweet girls who came to the Shelter together.

Jane loves the new Shelter…”it is glorious”.  Her only wish is for each cat’s home to have a window.  We agree with that wish.  Perhaps in time.   Thank you, Jane, for volunteering at Kingdom Animal Shelter.  You are a stunning addition, careful, gentle, efficient...with a sweet dry sense of humor.