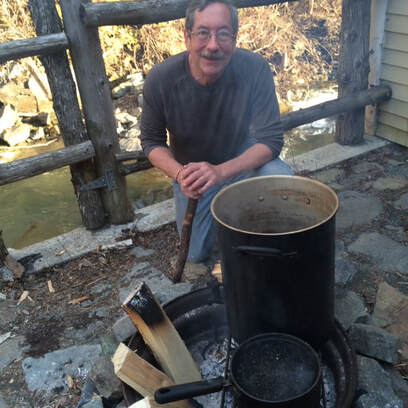 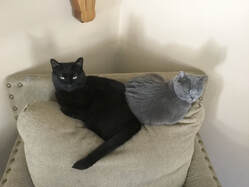 ​Jeff Pratt is one of several Renaissance men who volunteer at Kingdom Animal Shelter.  Jeff has been a teacher, a writer, a story teller, a vegetable gardener of the ordinary and the extraordinary.  He is an animal lover, and an earth lover.  He is a traveler, and a wilderness mountain man. He is a backyard maple sugarer who uses the old Native American  hollowed out elderberry twigs to help the sap drain from the trees.  And Jeff is sure he is an Old Soul….that he has been here before.

Jeff began volunteering at the old Shelter in St. Johnsbury Center about three years ago.   So, of course, he has seen how far we have come.  He wanted to volunteer because he wanted to give that opportunity to some of the young people he was working with from Human Services.  The first was a troubled young man who came faithfully to be with the cats, to help the cats.  And in turn, the cats and the Shelter helped him.  It was his safe place in a rather chaotic world.  In fact, sometimes this young man would curl up in one of the condos with the cats, saying he would simply like to stay.  Jeff has continued to help weekly with morning duty at the Shelter.   It has become a natural part of his life.  And he continues to introduce mentees to the Shelter and the cats.

Also about three years ago, our trapper, Nancy Pellegrino, trapped two cats on Caledonia St.  One was a large, somewhat friendly black tomcat.  The other was a smaller silver grey feral cat. For some months, the black cat had been the protector of the grey cat.    Nancy kept these two for a few days.  The black cat became Jack.  The grey cat became Silver Girl.  It turned out that Jack was FIV+, but Silver was negative.   Then Jack and Silver Girl went to a cottage at one of our fosters.  The foster had some devious plans in mind and invited Jeff over for dinner...and to meet Jack and Silver.  She then asked Jeff if he might take them to his house, just for the winter, and then they could come back to the cottage the next summer.  Her devious plan worked, and Jeff called to say he would like to adopt them both, permanently.  And what a wonderful match it has been.
​
Jeff describes Jack as “my buddy, my soul mate.  We know each other well, each other’s moods.  He is a rough and tough guy, with dignity.  He is an Old Soul cat.  We have been together before.”  About Silver, he says, “she has the Will of the Wisp.  At first, she was hiding all the time under the futon.  Then very slowly, over the past three years, I could put my finger on her nose….then I could touch her head, pat it gently with my finger.  Now she turns on her side for petting.  When she sees Jack being petted, she wants that, too.  And she lets you know with this very loud Bullfrog purr.  Jack and Silver are Yin and Yang.  They complement each other.  It is the perfect example of one plus one equaling more than two.”  There is nothing more rewarding than to watch the very tiny steps that a truly feral cat takes towards trusting and opening up to the warmth of a human.

​Jeff grew up in Wooster, Ohio.  He went to Ohio-Wesleyan College, studying English and Literature and then earned his MA in American Studies.  Teaching High School turned out to be his destiny.  He taught Juniors and Seniors for 28 years.  He loved that because there was an atmosphere of trust and care, and every class was like its own community, where everyone, even Jeff, asked questions and they all learned together.  Jeff says “it was a labor of love, the kind of job where one could sleep well at night”.

Jeff spent time in Port Henry in a cabin doing a silent retreat for a whole winter.  All the while, something was pulling him to Vermont.  Perhaps, he says, it was the wolf tracks across the frozen lake...calling him.  And so, he found the perfect place by a rushing brook in Passumpsic, and made his home there.  He spends time working on his vegetable garden. He has a farm stand there.  And much of his produce goes to the local Farm to Table.  In addition, Jeff is a writer.  He has published a novel, “The Cradle of Stone: a vision quest of a young Lenape boy”.  And he is now working on a book, “Between the Bells” about teaching, and what goes on in terms of learning outside of the confines of bells.  Stories are very important to Jeff.  And this book is about the stories that form the community and culture within a school.

We are so delighted to have Jeff as part of the Shelter family.  He brings such a richness in experience and care and vision.  Thank you, Jeff, for your love and commitment to the Shelter and its feline residents.