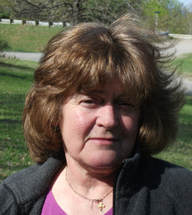 ​Nancy Pellegrino is a Kingdom Animal Shelter premier foster and expert cat trapper.
Nancy first became involved with KAS when in 2006 she saw a sign at the proposed Shelter property by the St. J prison asking for volunteers.  She went to a meeting and agreed to hand out pamphlets.  Nancy had done some fostering in Massachusetts, so offered to do that.  At that point in time, trapping was not on her radar.  Later, Nancy ran into a woman at Cottage Hospital who had five kittens in  a cage.  Nancy agreed to foster them.  In 2007, a patient at Cottage Hospital talked about five stray kittens around a property in Wells River.  The property manager wanted to destroy them, but a lawyer across the street heard of it and made up a document that they belonged to him and so they could not be destroyed.  Nancy was given some traps by the director of VSNIP.  She trapped those kittens and took them to her property in Vermont to foster them and find them homes.  It was the beginning of her fostering and trapping experience.  Since then, Nancy has trapped hundreds of stray cats and kittens and helped Kingdom Animal Shelter find them homes.
I asked Nancy what was the most difficult, the most heart-breaking experience she has had in trapping.  She immediately talked of trapping in a trailer park in St. Johnsbury in 2013.  There she trapped for trap-neuter-return or adoption 78 cats.  The difficult and heart-wrenching part was the number of cats in poor shape and even the number of dead cats.  But at least, 78 were to have a better life.
The most rewarding experience was several years ago when she got a call of a momma cat that had been abandoned by a dirt road with five newborn kittens.  The mom disappeared for a bit, trying to move kittens.  Three of the kittens were taken to a foster and volunteers trained to bottle feed every two hours.  An adult female was trapped in the area where the kittens were found and taken to see if she was the mom of these tiny kittens.  The mom took the kittens right in and they began nursing. But there were two tiny kittens still missing.  Nancy spent the entire night wandering through the woods quietly, listening for mewing.  She heard coyotes around and about.  Toward morning, she heard tiny mews deep in the woods.  She crawled on her hands and knees, flashlight in her mouth, toward the mewing.  These tiny kittens, eyes closed, heard her and began crawling towards her.  She gathered them up in her hands, flashlight in her mouth and crawled through the brush back to the road and her car.  At 5 AM she appeared on the doorstep of the foster parent and put the last two kittens in with Charlotte, the mom,  and they began nursing.  It is an incredible story of dedication and perseveance, to save those five newborn kittens.  All survived and found loving homes.  No wonder this is Nancy's biggest personal reward story.
We have many wonderful, incredible volunteers.  Nancy is truly one of our many extraordinary KAS volunteers.