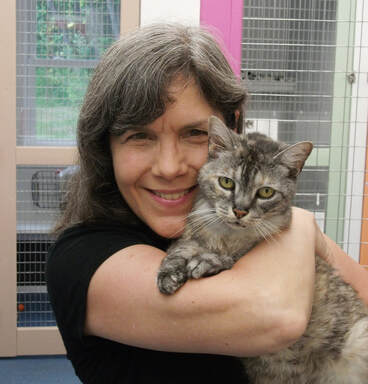 Michelle & Zola
​
As we all have experienced, sometimes when a beloved pet passes after many years of wonderful companionship, it takes a while to say “yes” again to being with kitties.  Michelle had a wonderful black and orange kitty named Pumpkin who passed away in August of 2017 after 14 years of being with Michelle and family.  It was very hard.  But in June of 2018, after talking with KAS volunteers, Michelle decided she was ready to be around kitties again, ready to volunteer at the Shelter.  There were cats up the street from her, brothers, who would come to visit.  And George the Cat, who belongs to a neighbor, would also come over to visit.  Those visits felt good.  And then at the end of July, an orange kitty came to visit and began camping out in the bushes by the side of the house.  Little by little, with treats, the orange kitty began venturing out, lying on the stoop, coming into the house, checking out the rooms.  And George continued to visit and “Ginger”, as she is now called, and George got along fine.  One morning, Michelle came down and Ginger was lying on the couch.  It seems she had decided that this was “home”.  Apparently, Ginger is not a big fan of thunderstorms, so two storms in succession sealed the deal for Michelle and Ginger.  Michelle left the door open so Ginger could come and go.  And once the cold came, Ginger stayed.

Michelle has two sons, one in his late 20’s, the other in his early 30’s.  One lives in Littleton.  One, who lives in Virginia, is a total cat lover.  Michelle goes down to “babysit” his cats when he goes away.  Michelle has had an interesting life, working as a para-educator in the St. J Schools.  She has worked for VSAC, worked also as an accountant, as well as in tax preparation.  She attended UVM and then got her MBA at Northeastern in Boston.  She has taught yoga, worked with Hospice, helped kids through bereavement, and has done Reiki at Littleton Hospital.

Tuck-in is just perfect for Michelle.  She enjoys being alone with the cats, taking time with them, talking to them.  She especially likes Zola, who has a very “sweet and gentle energy”.  She is also very fond of Brielle and Bob.  For Michelle, the new shelter is quite a step up.  There is more space.  It is easier to adjust that space to meet any special needs of the cats.  It is easier to be organized in the kitchen.  “The cats just seem happier”.

We are so grateful to Michelle for volunteering at KAS.  She does a stunning job with tuck-in, and is often willing to give more time when someone can’t make it in and we need help. 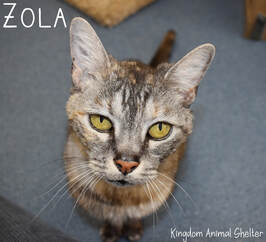 A note on Zola:  Zola is about 6 years old.  But she already has some health challenges.  We are not sure why.  She is hyperthyroid and that means she needs a small pill (methimazole) twice a day.  She eats that easily in a pill pocket.  And she seems to have the beginnings of kidney difficulties and is thus on a prescription food.  Neither of these is outrageously expensive.  But it would be an added cost.  However, adopting Zola would be so worth it.  She is endearing...so affectionate... and she purrs at the slightest approach.  If you would be interested in giving Zola a home, please come to meet her.  You will fall in love.