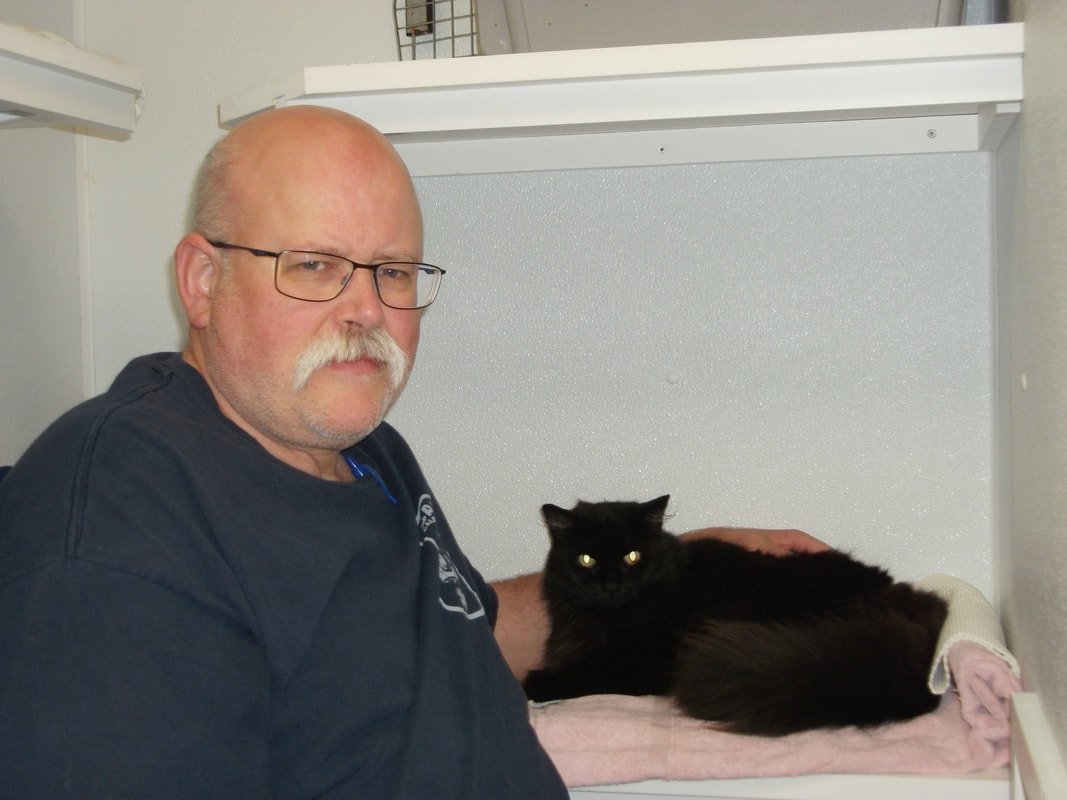 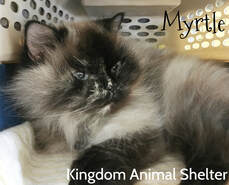 ​Chances are, you or a family member might have met Tom while riding in a Calex Ambulance.  He has worked for them for 25 years, as a paramedic, providing patient care and overseeing the ambulance, as well as taking 911 calls, and tending to interfacility transfers.  With his volunteer work at the Shelter, we know him as gentle, caring, generous, and skilled.  We are quite sure he brings these attributes to his ambulance work, as well. Tom is just one of those people who wants to give back to the community.  It shows in everything he does.

Tom LOVES cats...and has a few of his own.  All five are rescue cats.  About a year ago, Tom reached out to Kingdom Animal Shelter with a wish to volunteer.  He is one of our morning duty mainstays...where he helps clean and disinfect condos, change litter boxes, tend to water and food.  And on many an occasion, he will show up with the treats and toys for the resident kitties.  We have recently taken in a mom cat and five two week old kittens.  They are now residing in the nursery, until they go to foster in the next few days.  Tom wanted to donate the proper food to help the new mom and her babes.

Tom grew up in St. Johnsbury.  He worked as a meat cutter for 20 years at Shop and Save and then at White Market.  He then moved on to working in the healthcare field, driving and working with Calex ambulances.  At the same time he works with the American Health Centers in Bedford, NH, on a mobile MRI and nuclear medicine trailer, as a patient coordinator.  In his spare time, he and his son, Paul, like to go to Watkins Glen, NY, and Loudan NH and even Dover DE to watch the auto races.  His daughter, Bess, is also an animal lover and has helped out at the shelter, as she can.  She recently saved several newborn kittens, bottle feeding them, tending to their toilet needs.  They will soon be ready to be adopted out...if she can part with them.   Tom’s mom loves cats, as well, and has several.  She adopted Myrtle from KAS and gave her a wonderful 8 months before Myrtle passed away from cancer.  We are very grateful for Myrtle’s loving care in the last months of her life.

When at the Shelter, Tom enjoys petting the cats, helping out, falling in love with a few old timers.  He also enjoys the other volunteers and the atmosphere within.  In addition, he looks forward each time he comes in to meeting any new feline arrivals.  Of course, Tom has had some favorites over time.  Myrtle, with her very funny face, who just blossomed in a home.
​
Sadie, who was quite special.  Fourteen year old Cinco, who lived most of his life on the streets and who folks remember with affection.
When asked what Tom wishes for the Shelter, he said, that of course, he would want it to be financially sound so it can carry on its good work.  But with a smile on his face, he said he also wished for it to be empty.
​
Thank you, Tom Reed, for being part of the KAS family.