It Takes a Village…
by Julia Persch 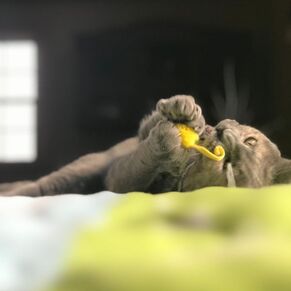 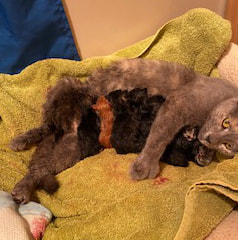 This story starts with the rescue of one stray cat, which resulted in six happy families celebrating the holiday season with young, cheerful feline energy in their homes: Little bright lights, darting for play mice and lifting people’s spirits during the dark stretch of a pandemic winter close-down.

Many kind people were involved in this rescue tale: a cat trapper, a kitten midwife, a kittygarten teacher, several foster families, wonderful adopters, and the entire volunteer team of KAS Board members, who are pulling the strings to bring homeless cats and people together.

The Trapper
On July 15th, Kingdom Animal Shelter received a call form Sandra, a resident of St. Johnsbury. She had been feeding a stray at her house for a month, a beautiful grey dilute tortoiseshell cat, who would come up on the porch to eat, but wouldn’t let herself be touched.
Sandra is known as an animal lover in her neighborhood. Therefore people drop off animals close to her home, so that they might get tended to. Sandra was certain that the cat was pregnant, and expected that she would be very hard to catch. KAS accepted to take the cat, as soon as Sandra could get her hands on her.
On the same day, Sandra put both a Havahart trap and a cat carrier on her porch. When Sandra woke up in the morning of July 16th, the cat was asleep in the carrier on the porch. Sandra closed the door to the carrier and brought her to Western Avenue Veterinary Clinic.

The Midwife
“Western Ave” is one of the first stops for our rescue cats before coming to the Shelter or going to foster places. At the clinic the cats are thoroughly examined, tested for illnesses and treated for parasites.
Dr. Melora Hunt confirmed that the cat was healthy and pregnant with at least seven kittens, that she was shy but sweet, polydactyl or double-pawed and about one year old.
For pregnant strays, KAS relies on experienced foster families, and luckily Dr. Melora herself agreed to take this stray home, so that the cat would give birth under expert care.
On Aug. 1st, this mama delivered eight healthy kittens:  four black, one orange, one tortoiseshell and two tabbies. Many of them were born with extra “thumbs” like their double-pawed mom.
Mama cat and her babies spent one week at Melora’s house and then moved on to their next foster place.
In Kittygarten
Vet tech Andrea Chiesa, a long-time volunteer at KAS, is especially fond of older cats and has provided a loving home for a number of geriatric kitties for their final years of life. After her beloved senior Heidiman passed away, she felt that it was time to bring young energy to the house. There are few things as healing to the heart as kitten magic.
In Andrea’s kittygarten, the mama cat was named “Valentina” and her offspring all received their baby names. Little Big Al, Dolly, Mack and Noelle, Lucas and Ernie, Hemi and Bear Cub, made their first attempts in climbing curtains and windowsills, discovering the joy of scratching in a litter box, and preparing to cause as much trouble as possible, while being totally adorable. Within eight weeks under Andrea’s care and the gentle watchful eye of her sweet pitbull Ula, the kittens started to show their different characters. 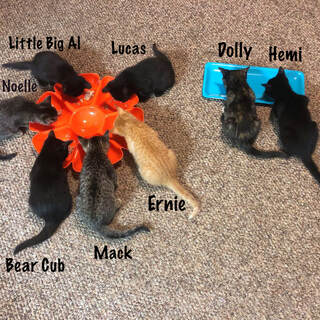 Little Big Al, pitch-black and the smallest of the litter, had the biggest personality. Dolly the tortie was the warrior princess. Tabby boy Mack liked to play rough-and-tumble. Tabby girl Noelle and black Lucas loved cuddling the most. Orange tabby Ernie was the explorer. Shy black Hemi enjoyed to climb and black Bear Cub was the first one looking out a window.
At the end of September, when the kittens were old enough to be weaned, Queen Valentina stayed with Andrea to continue her rule over the house while her kittens went on to their next adventure. 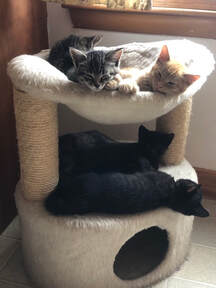 At Boarding School
The Shelter couldn’t work half as well without our dedicated foster volunteers. Especially since the start of the COVID pandemic, several foster families have done a beautiful service to KAS in preparing rescue cats for their forever homes. Their participation in adoption-Zoom-calls has been essential in order to show cats in a home environment, and in advising the adoption counselors if an applicant might be a suitable adopter.

Many KAS kittens have been socialized under Catmistress Kathy Pearl’s motherly care and become superb companion cats. In a nurturing family environment, loved up and handled by Kathy’s adult children and many grandchildren, our little ones continued to grow into a most friendly and lively group of sleek and beautiful youngsters. 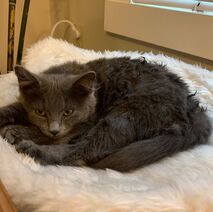 Sasha
At Kathy’s foster home, they were joined by a lone kitten, Sasha, who had been abandoned by her mom.  Sasha was as friendly and nearly the same age as the siblings. Valentina’s kittens put their big thumbs up for Sasha, and made her part of their clan. They all played nice with each other, and enjoyed sleeping in cuddly heaps
By mid-October it became apparent that tending to the litter boxes of nine kittens was too much for one household to keep up with. Therefore Mack and Noelle, Bear Cub and Hemi moved to the Tucker family, another KAS foster home, for their graduation. 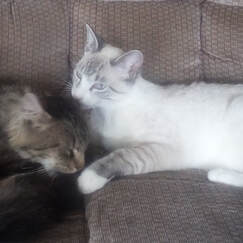 ​The Tucker family has done an outstanding job in fostering a number of cats of different ages for KAS in the past year. In particular the ladies of the house, Julia and her daughters Nicole and Salem, provide wonderful attentive care, and make the most thoughtful assessments of their fosters’ needs and personalities. Their younger family cat Wart is part of the team. He befriends all the foster kids and teaches them friendly ways of play-wrestling and kitty chase. Their older cat Delfi on the other hand, tutors the newcomers to be respectful of feline territory and boundaries.
Finding Forever Homes
Within the last two weeks of October, the mama cat and all the kittens found excellent homes after we processed a flash flood of applications.
Because the kittens were all so fond of each other, we made sure to find homes for most of them in pairs. Mama Valentina, now called Evie, had an especially adventurous adoption story, which you can read in the article “Twice Rescued”.

But who would be the odd kid out of nine to be sent out alone, without the comfort of a kindred kitten?
​ 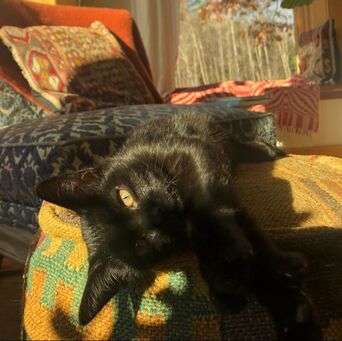 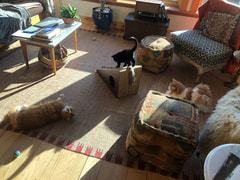 Super-friendly and confident, Little Big Al seemed the right choice for a single-kitten adoption.
Meagan from Holderness NH was looking for a playmate for her younger Main Coon mix Oddvar, since his older cat friend Curry was a couch potato.
The family wanted a little boy, but wasn’t fazed by the fact that Little Big Al turned out to be an Alice! It was at the spay/neuter clinic that we found out the truth about her gender. She went home with Meagan and her husband at the end of October.
​
On November 23rd Meagan wrote: “We have had Chimney for 3 weeks now and she is such a doll! She is fully integrated with our house and the cat pack! 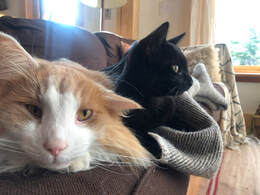 She loves sitting under the wood stove, snuggling with Oddvar, which usually turns into a round of wrestling...Those two are two peas in a pod. There isn’t anywhere that Oddvar goes that Chimney doesn’t follow. She loves playing with newspaper and chasing anything! She and Curry have a sweet relationship. Curry will lick her clean and sometimes play too! We couldn’t love her more!” 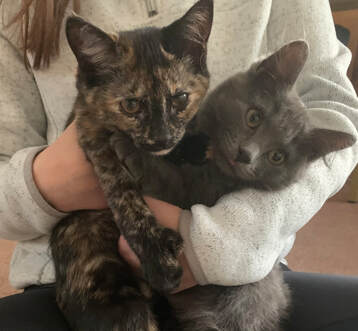 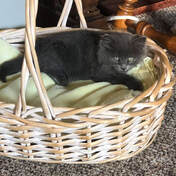 ​Fiona from Franconia NH fell in love at first sight with the pictures of tortoiseshell Dolly and grey fluffy Sasha on Petfinder.
Four weeks after their adoption Fiona wrote:  “They are both doing great! Dolly is athletic and is currently very interested in hunting ladybugs. Sasha is very calm and cuddly, but definitely has a sassy streak.” 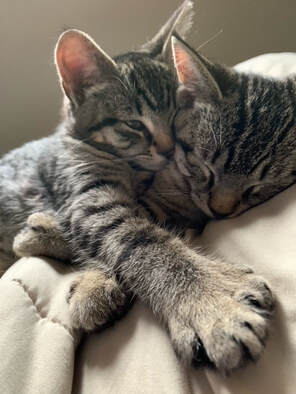 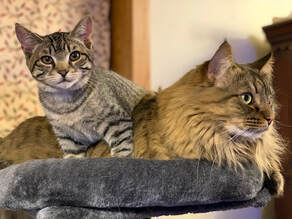 The tabby siblings had shown a special fondness for each other early on, and found a happy home together with Melissa’s family of four humans and two felines in Barnet, VT.
The whole family did a fantastic job in introducing the kittens to their two adult Main Coon cats. You can read more about their introduction in the article “New Friends”.
​
Melissa wrote on December 2nd: “Henry and Luna have developed quite the personalities! They have both claimed their spot in the family. Luna tends to instigate her brother and likes to play with him. She also is a climber! We believe this is because of her extra toes that she is so good at it! Henry was the first one to approach the big cats and has no fear for much of anything.

He is a love and snuggles right up at night. They are both very vocal and kind of sing a song to us when it is time for them to eat, or if they want to be picked up. They greet me at the door every day when I get home.
We could not be happier or more in love with these two new additions to our family. Thank you for bringing some love and joy to our lives during this trying time by allowing us to take them home and love them!” 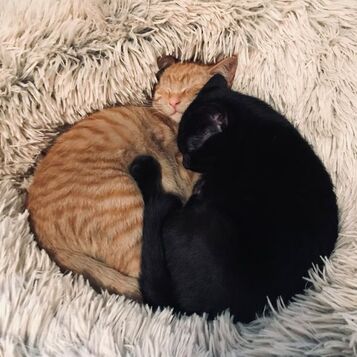 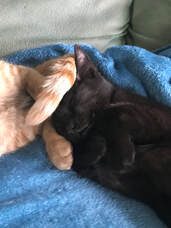 Orange boy Ernie had taken on the role of the kind big brother who was looking out for his siblings and snuggling with all. Since Lucas seemed the most sensitive of his brothers, in need of the most assurance and affection, we paired these two kittens and they went home with Heather’s family of three in St. Albans, VT, where they were named Milo and Max.
On December 2nd, 14-year-old daughter Grace wrote:
“Milo and Max have settled into our family quickly. They love playing and cuddling with each other and with all of us.

​We just love to hear the pitter patter of their adorable paws running up and down the hall as they play! They also enjoy watching the chickens in the backyard through our sliding glass door. We are so blessed to have both of them together as wonderful additions to our family!” 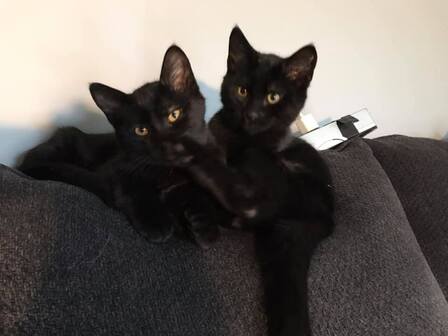 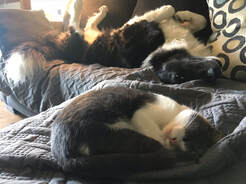 These two black kitty boys found a wonderful home with Sarah from Jefferson, VT, who has a soft spot for rescue kittens.
She also has a great assistant in her cat-friendly dog Rocky: “Rocky is very gentle and loves licking kittens and plays gently with them when they run around. I helped with the feral cat population at Smuggs and bottle fed three kittens for weeks and weeks. Rocky loved licking the KMR off of them and their rear ends and it helped them go to the bathroom! Win win!”
Earlier in July, Sarah had adopted, or rather rescued, a sickly kitten from Craigslist. Little Wink didn’t thrive and became quite ill in late August. He was lethargic, but still so snuggly and loving. He died after a short but happy life in Sarah’s and Rocky’s care. 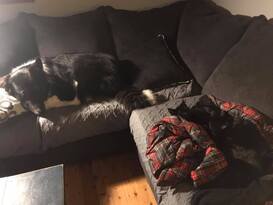 At the end of October, Bear and Hemi joined Sarah’s family.
On November 22nd, Sarah wrote: “I just wanted to let you know that the kittens are doing amazing and I'm so happy that they live with us now! I kept Hemi's name the same and named the other one Earnest!”
The naming was in honor of Ernest Hemingway, who loved double-pawed cats! ​ 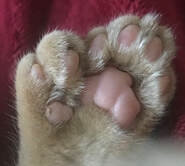 ​
High Five, or Six or Seven, to these paw-some kittens and their new families!
​
You can read about mama cat Valentina’s adoption story in the article “Rescued Twice”.