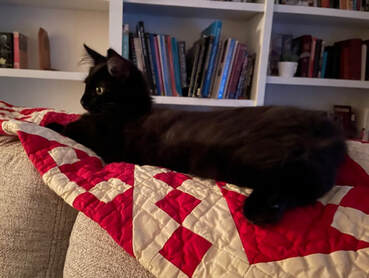 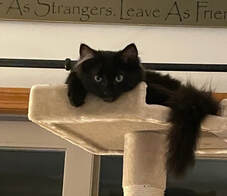 ​Orlando
Back in July three black kittens and their mom were found living under a porch. One of them was Orlando. They were all rescued and their mom, Coco, went home with her new person Barbara in Lyndonville while her offspring entered foster kindergarten with our kitten-trapper Nancy. Orlando soon graduated and was reunited with his mother Coco.
​
On October 3rd Barbara wrote:
"Little Orlando is such an Explorer! He loves watching the birds from the screened porch, plays with his toys, and sleeps with Mama Coco every night...along with his "Nancy-Blanket" that he remembers from his babyhood. Orlando is GROWING--almost as big as his mama! His favorite haunts are leaping out from the washer/dryer area to spook his mom, and sneaking up on the table at lunchtime, a naughty habit to encourage, but such fun to watch! He is the sweetest little guy!" 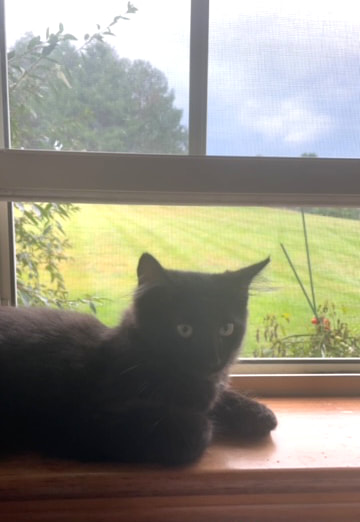 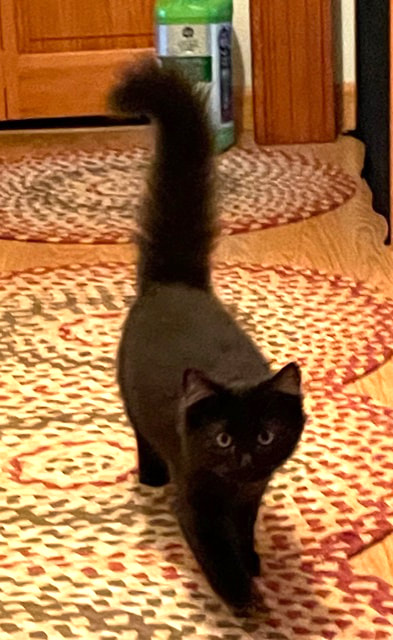 Orlando's brothers are Dudley and Little Timmy, who are very bonded are still looking for their forever home!
You can see them at https://www.kingdomanimalshelter.com/available-cats.html 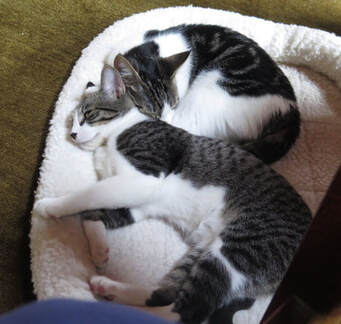 Penny and Lucy
The Peanuts Kittens

Over the past year our kitten trapper Nancy had her eyes on a beautiful stray mama cat behind a pizza place in St. Johnsbury. Last fall she rescued mama Magnolia's first litter, the "Pizza boys" who all found loving homes, but Magnolia would not be caught. And she wasn't done making babies, either. Her second litter, the "Peanuts Kittens" were rescued this summer and adopted in September. 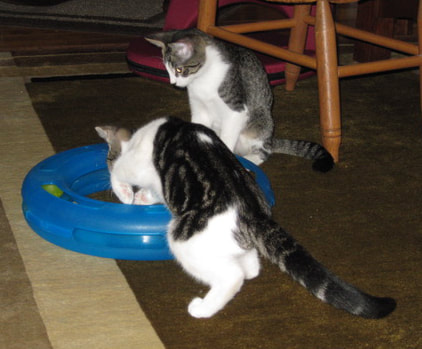 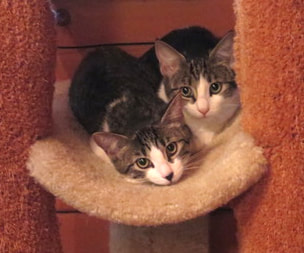 Claire and Richard from NH fell in love with Lucy and Peppermint Patty (now Penny). They wrote on September 22nd: "The girls are adorable. They are adjusting well, eating and sleeping and playing and using the catbox.  Penny allows us to pet her, and she rubs up against us. Lucy will be close behind, already allowing some touch.  Overall, they are wonderful, and we believe they know they are in their forever home! 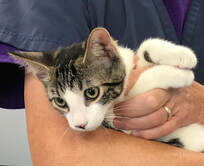 Elyse and her daughter in Middlesex VT couldn't resist Snoopy's and Woodstock's baby charm and took them home.
On September 27th Elyse wrote: "Oh my gosh, they are doing great!!!  We just went and ate dinner with them, and they are playing and eating and using the litter box like champs!  They are still a little shy when we first go in their room, but they warm up pretty quickly.  We are SOOOO in love!"

We are happy to tell you that mama Magnolia walked up to Nancy a month ago with another big belly full of kittens and this time she went willingly home with her. Magnolia gave birth to her final litter of four in warmth and safety. You can read more about her story in "When You Least Expect it". 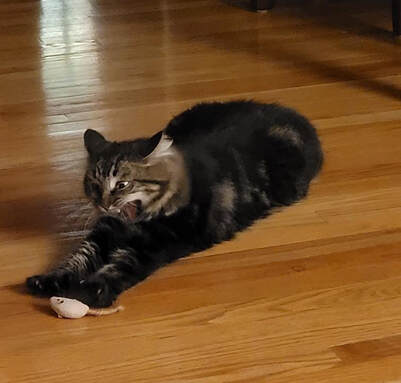 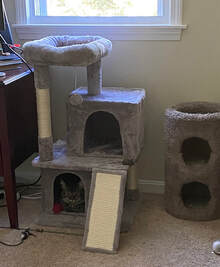 If you read our September Newsletter, you know about Sheldon, our half-feral pretty boy from Ryegate who spent four months at the Shelter and slowly came out of his shell. For a long time, we didn't know if he might ever be willing to be petted and adoptable as a companion cat, but we never gave up on him.

Sheldon went home with Janeen and Chris in MA.
Janeen sent an update on September 20th:

I hope all is well in Vermont! I just wanted to drop you a line and let you know how Sheldon is doing. He is soooo sweet and doing better each day! He's really timid as you know and jumpy at noises, BUT that's only for a second.  He sort of startles and then immediately chills out. He loves loves that mouse toy (thank goodness you gave us that) and he will play with it for 20 minutes straight. He's been rolling around with it and jumping and everything. He's not really playing on his own yet, but I imagine that will come. He's not going under the desk anymore or behind the blanket, but we leave it there anyhow. He's eating just fine and all is well with the litter box.
He's sleeping on the top of his tower mostly or the bottom of the new kitty condo. His grandparents bought him another kitty bed, so he has two now, but I don't think he knows how to use them. But maybe some day!
He LOVES LOVES LOVES being pet. He never tires of it and never bites or swats. He will let you pet him pretty much all over.... back, head, paws, chin, butt, the tail. We haven't touched the tummy yet, but we will get there lol! 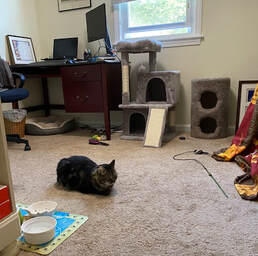 He's not tucking his tail nearly as much and he will let us run our hands over his tail when petting him!  He purrs LIKE CRAZY (he's super loud) with all the petting and kitty rub downs. He LOVES it!  He's soooo cute and sooooo sweet. We can't wait to see him feel better and more confident and not be so afraid.  We've opened the door a crack and he's getting more curious. He actually came out on Friday night to the kitchen, and we had a toy mouse for him.  There are some pics. That first one is so funny!  Chris took a bunch of pics in a row.. and that first one he happened to catch... Sheldon reaching for the toy mouse and then came a big yawn mid stride! So that's what that is.. a big yawn. Not a vicious cat attack.. ha ha.  And you can see from the second pic that he also likes his new kitty condo.
Take care and I will keep you posted!
Janeen 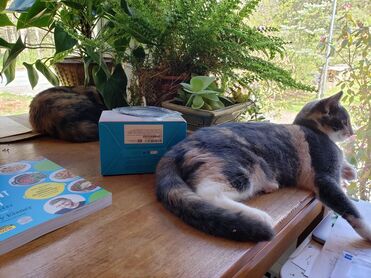 ​In April two handsome calicos, Annie and Lola, joined Barbara's and Hugh's beautiful home in NH.
Barbara sent an update in September:
"I hope you all are well. We are SO loving our girls! I can’t believe they are a year old – it feels like they’ve owned our home forever. It’s been fun seeing their personalities develop. Annie – she was Sophia – is very much the dominating kitty. And wow, does she ever love suppertime and her little bouncy balls. Lola – she was Callie – is so playful and so affectionate. They still are very timid if we have friends over. I hope that changes with time. My younger son doesn’t believe we have them! The picture is them “helping” me at work. Very fun work buddies."​